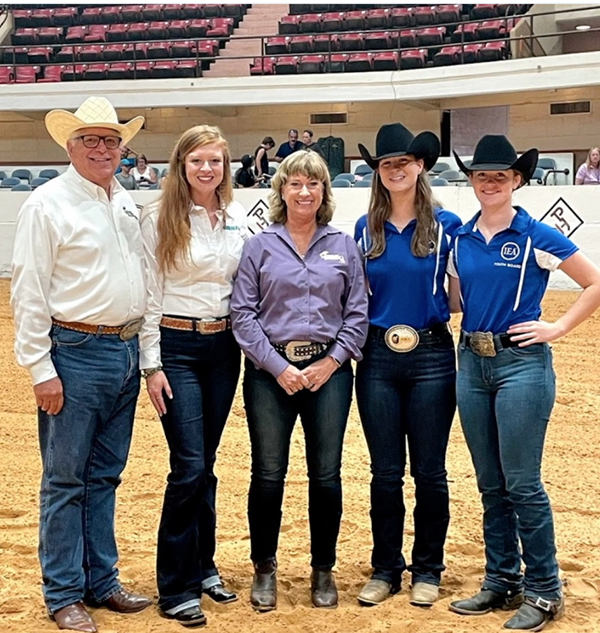 July 15, 2021 – (Columbus, Ohio) – The Texas heat was not nearly as hot as the competition going on in the rings during the 2021 American Paint Horse Association (APHA) World Show and IEA Western National Finals this month in Fort Worth.

For the first time ever, the Interscholastic Equestrian Association (IEA)Western National Finals, presented by the National Reining Horse Association (NRHA) partnered with APHA to host a beautiful 2-day finals for IEA riders in grades 4-12 from across the nation who had qualified earlier in the IEA season.

Set in the historic Will Rogers Coliseum and the newer Watt Arena, the IEA Western Finals saw nearly 200 individual and team competitors in Horsemanship and Reining classes. The IEA uses a draw-based format for competition, whereby riders randomly are assigned the horse(s) on which they will compete just minutes before entering the show arena (with little to no warm-up).

Click here to watch a video recap of the event.

“We absolutely loved being a part of the APHA World Show and felt very welcomed by all the APHA members and staff,” stated IEA Co-founder/Executive Director Roxane Durant. “The facilities and opportunities given to our riders were outstanding and we have received dozens of great comments from our members. We look forward to continuing our partnership with APHA in a variety of ways in the coming years.”

There was not a dry eye in the house when IEA made a special presentation to honor the late Roger Elder with the new Roger Elder Memorial Coach Sportsmanship Award and Perpetual Trophy. Roger’s wife, Sandra and daughter Sarah were present to accept the award on his behalf. The award was graciously donated by friends and members of the Tennessee Quarter Horse Association.

Day two of competition saw 25 middle and high school teams battle it out for every point for the chance at National titles. In the end, it was King Show Horses of Snellville, GA (Region 4) to take home the Upper School Champion Team trophy (coached by Jennifer King) with Autumn Rose Farm of Powell, OH (coached by Debbie Griffith) taking home the reserve honors for Upper School.

Day two ended with a team parade and multiple awards presented including the NRHA Sportsmanship Award which was presented to McKenzie Templin of Lone Star Equestrian (Region 7) coached by Kelly Haydon and Russell Haydon. The Team Spirit Award was a hard fought battle of costumes, props, sportsmanship, volunteering and social media posting with the award going to Arizona Reining Equestrian Team (coached by Jessica Bein). Grier School won the Scavenger Hunt. Volunteers of the Show went to Olivia Badgley and Aubree Whanger, both of Dare Equestrian Team.

IEA would not exist without the help of our equine partners and horse providers. The Top Horsemanship Horse (Juice) and the Top Reining Horse (Zippy) both hailed from IEA team, E-Power, of Gunther, TX with the APHA Most Valuable Paint (MVP) Award being presented to Gunnador from Team Need-A-Hand in Mufreesboro, TN.

A complete listing of results can be found at:  https://www.rideiea.org/western/finals/.

Now entering its 20th year, the IEA has nearly 14,000 members across the United States riding and coaching Hunt Seat, Western and Dressage disciplines. The non-profit 501(c)3 IEA was organized to promote and improve the quality of equestrian competition and instruction available to middle and secondary school students (grades 4-12) and is open to public and private schools and barn teams. There is no need for a rider to own a horse because the IEA supplies a mount and tack to each equestrian for competitions. Its purpose is to set minimum standards for competition, provide information concerning the creation and development of school associated equestrian sport programs, and to generally promote the common interests of safe riding instruction. For more information, visit www.rideiea.org.

The American Paint Horse Association is the world’s second-largest international equine breed association, registering more than a million horses in 59 nations and territories since it was founded. APHA promotes, preserves and provides meaningful experiences with Paint Horses. For more information, visit www.apha.com.