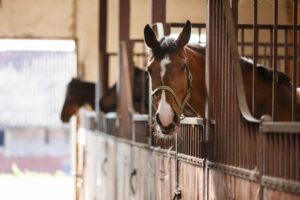 Adobe Stock image: The horse peeking out of the stall

The horses had shifts in their white blood cell counts typical of a stress response and higher levels of plasma cortisol. These changes could make them more vulnerable to infectious disease.

In the study, conducted at the University of Hohenheim in Stuttgart, Germany, Sonja Schmucker and colleagues followed a group of twelve horses through a series of management changes, and monitored alterations in their immune response and behaviour. The research is published in PLOS ONE.

Twelve warmblood geldings, aged 2-3 years old, completed the study. Before the start of the investigation, they had been living together in a group on pasture.

In the first phase of the study, the horses were divided into two groups, each maintained on two separate paddocks so that horses in one group could not see the others. After the eight days trial period both groups were returned to their original setting.

After a further eight weeks on pasture, the horses entered the second part of the study. They were moved to individual stables, where they were able to see and touch their neighbours through barred windows. For the first week after housing, horses were allowed 30 minutes daily exercise in groups of 6 in an indoor area of the stable. From the second week onwards, the horses were exercised by lunging.

The research team collected blood samples for analysis of immune cell numbers and cortisol concentrations from all animals on days 1 and 8 after both changes in housing conditions. In addition, in the stabled group they collected samples 7 and 6 days before, and again immediately before, the beginning of the stabling phase.

They found that moving to individual stabling led to acute stress-induced immune changes but dividing the larger group into two smaller ones did not.

“The number of eosinophils, monocytes and T cells declined, whereas the number of neutrophils increased resulting in an increased N:L ratio. This pattern of change resembles the well-known picture of an immunomodulation induced by acute social stress.”

The researchers report “Although cortisol concentrations returned to baseline level after 8 days, the alterations in most immune cell numbers persisted, pointing to a longer-lasting effect on the immune system of the horses.”

They also monitored the horses’ behaviour during the study and noticed that signs of stereotypical behaviour started to appear amongst the housed animals.

The authors conclude “relocation to individual stabling represented an intense stressor for the horses of the present study, leading to acute and lasting alterations in blood counts of various leukocyte types. In contrast, fission of the stable group did not result in behavioral, endocrine or immunological stress responses by the horses.”

“The results of the present study therefore strongly indicate that social isolation is a chronic stressor with negative impact on welfare and health of horses and highlight the advantage of group housing systems in view of immunocompetence.”

Single housing but not changes in group composition causes stress-related immunomodulations in horses. PLoS ONE 17(8): e0272445.