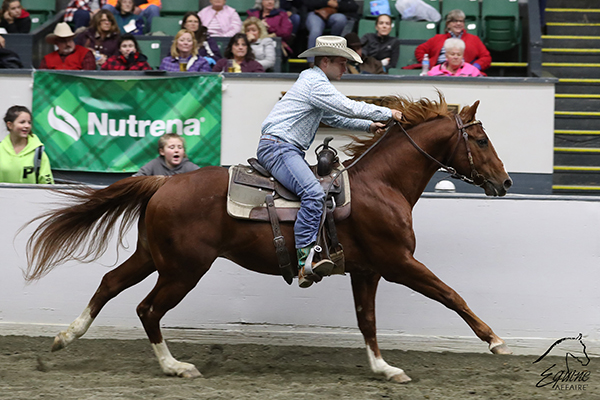 With education at its heart and the equine industry as its canvas, there’s no better place to learn more about horses than Equine Affaire. In addition to educational forums and interactive exhibits designed to educate youth and beginners, Equine Affaire offers a robust schedule of educational clinics, demonstrations and seminars for equestrians from every discipline and skill level. Plan your trip to Columbus, Ohio, today to visit the Ohio Expo Center on April 2-5, 2020, for the opportunity to learn firsthand from some of the industry’s best and brightest clinicians during Equine Affaire.

This year’s event showcases the knowledge and talents of Jonathan Field, Craig Cameron, Warwick Schiller, Tik Maynard, Lynn Palm, Jonath Robles and Jim Thomas, plus dozens of other discipline-specific clinicians. With clinics covering everything from general training and horsemanship to core strengthening and yoga for horses, there’s a session for everyone. Best of all, attendance for all clinics is included in the price of general admission – just $15/day for adults or $50 for a four-day pass, while tickets for children (7-10) are $8/day and children six-and-under attend for free. Purchase your tickets today by visiting equineaffaire.com and enjoy the added convenience of new digital ticket delivery.

At Equine Affaire in Ohio, make sure to attend one of Jonathan Field’s sessions on general training and horsemanship. When he isn’t at home on his ranch north of Vancouver, British Columbia, Jonathan Field travels throughout North America sharing his “Inspired by Horses” horsemanship program and working with students of all riding levels. Though his initial equestrian pursuits were within the English realm, he transitioned years ago to become a working cowboy. Following an industrial accident at the age of only 19, horses played a crucial role in Field’s recovery—both physically and mentally. This tragedy cemented his dedication to horses and his desire to “give back to the world of horses” by building his career around them and sharing what he has learned.

Craig Cameron’s motivational and entertaining speaking style focuses on the training principles of patience and understanding. A life-long rancher, working cowboy and horse trainer, Craig Cameron has developed a keen understanding of the Western lifestyle and discipline. After years of bull riding on the professional rodeo circuit and successfully operating his cattle business, Cameron decided to give something back to the horse by devoting his time and talents to training horses. By honing his horsemanship skills and conducting clinics throughout North America and beyond, Cameron has become a household name in the horse industry. His work has earned him the prestigious American Cowboy Culture Working Cowboy of the Year award. Currently Cameron can be found hosting a horse training program as well as his Extreme Cowboy Races on RFD-TV and at equine venues throughout the country and working on his Double Horn Ranches in Bluff Dale, TX, and Lincoln, NM.

Although Warwick Schiller grew up riding Quarter Horses in Australia, he has called the United States home for almost thirty years. An accomplished reining competitor, Schiller has multiple championship titles in the United States and Australia, including being a member of the 2010 and 2018 Australian Reining Teams at the World Equestrian Games. In addition to training his own horses, Schiller is passionate about working with riders from all disciplines to help them improve their communication and relationship with their horse. In 2012, he began to record his training methods for everything from starting young horses to retraining problem horses. Originally started on a YouTube channel, the Warwick Schiller Performance Horsemanship Online Video Library now hosts more than 500 videos and 300 hours of training footage with more than 20 million views. Though his home base is in Hollister, CA, Schiller spends a lot of time on the road conducting clinics throughout North America, Australia, New Zealand, and Europe.

Eventer and natural horsemanship advocate Tik Maynard is a fifth generation equestrian from Vancouver, Canada. He spent his youth riding in Pony Club, where he got involved in Tetrathlon, a sport that incorporates running, swimming, shooting, and riding. He eventually found his way to Modern Pentathlon competitions, which include all of the sports that make up Tetrathlons, plus fencing. Maynard spent six years competing in the Modern Pentathlon on the Canadian National Team and was a member of the Canadian team at the 2007 Pan American Games, three World Championships, and eleven World Cups before focusing his competitive sights on eventing. He was long-listed for the Canadian eventing team for the 2012 London Olympics and is currently long-listed for the national eventing team. Maynard conducts eventing and natural horsemanship clinics throughout the United States, Canada and the United Kingdom.

For 50 years, Lynn Palm has championed the partnership of horse and rider. An international clinician, she travels extensively from her facilities at Fox Grove Farm in Ocala, FL, where she and her husband, Cyril Pittion-Rossillon, teach the fundamentals of their Palm Equestrian Academy. Palm is an American Quarter Horse Association (AQHA) judge and holds her USEF R Western Dressage judges license. Continuing to compete in both United States Dressage Federation and Western Dressage Association of America shows, her competition record is second to none. Palm was a special guest performer at the 1996 Olympics and was named 2000 AQHA Female Equestrian of the Year by the Women’s Sports Foundation. In 2003, she was the recipient of Equine Affaire’s Exceptional Equestrian Educator Award, and she was titled Horsewoman of the year in 2007 by the American Quarter Horse Association. Palm presented as a clinician and entertainer at the 2010 World Equestrian Games and the 2017 FEI World Cup Finals.

Like many trainers, Jonath Robles grew up with a passion for horses. Though he put his passion on hold to attend the University of Oregon and earn a Bachelor of Arts in Sociology, his education ultimately influenced his training methods. Robles researched why certain people were more successful in life than others — namely due to opportunity, education, and having the right connections — and implemented those ideas into the world of horses. Out of his J. R. Horse Training in Newberg, OR, Robles specializes in colt starting, western dressage, reining, and working with “problem” horses. After being exposed to horse trainers that used a lot of old school cowboy training methods, which seemed more cruel than effective in his eyes, Robles became fascinated with natural horsemanship, and now uses it as the driving teaching method in his training. When he’s not training or teaching clinics, Robles enjoys competing in colt starting competitions. Robles was named the Colt Starting Reserve Champion during the Wrangler National Finals Rodeo in 2016.

Jim Thomas has spent his entire life surrounded by horses, but it wasn’t until his retirement from the U.S. Army in 2007 that he began training horses full-time. That same year, he competed in his first Extreme Mustang Makeover, which became a pivotal point in his horsemanship journey. After training that mustang, Thomas earned a reputation for being able to work with wild or difficult horses. He has trained almost 100 mustangs since then and continues to compete in the Extreme Mustang Makeover every year. Outside of working with horses and riders of all disciplines on his ranch in Pittsboro, NC, Thomas conducts clinics, writes articles for Southeast Equine and Carolina Hoofbeats, and is currently working on a book. He has also served in various positions as a North Carolina Horse Council Executive Board Member and is a member of the Chatham County Equine Advisory Board.

Attendees at the 2020 Equine Affaire in Ohio will also have the opportunity to learn from:

Tickets for Equine Affaire in Ohio are on sale now at equineaffaire.com. After purchase, electronic tickets will be delivered via email. Store your electronic ticket on your phone for scanning upon arrival or print at home and present your printed tickets at the gate. For additional information about Equine Affaire, including demo schedules, host hotels, and more, visit equineaffaire.com or call the Equine Affaire office at (740) 845-0085 between 9 am and 5 pm EST, Monday through Friday.