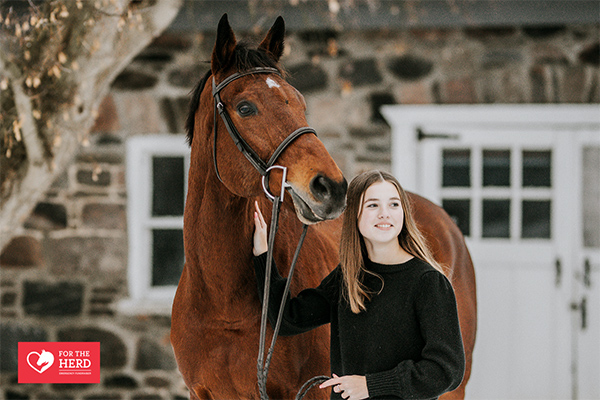 Competition has resumed in much of the United States and schooling shows and clinics are cropping up on Canadian calendars. Yet, the school horses who likely put riders on their equestrian path in the first place are still hurting. Big time.

After two or three months of complete shut-down because of COVID-19 and now an only partial return to normal operations, lesson program owners are looking at scary balance sheets: same costs of feed and care, but nothing in the revenue column.

As a silver level corporate sponsor of Ontario Equestrian’s For The Herd campaign, Haygain is helping provide desperately needed funds toward feed and care of “schoolies” throughout the province.  “Haygain is all about helping horses,” notes Bee Richardson, the company’s VP of Marketing.  “We know how important lesson horses are as most people’s first introduction to our sport and we are happy to help.”

The idea started as a local Facebook-based endeavor and has grown considerably since Ontario Equestrian took it on in late April. The majority of the $175,000 raised so far has already been distributed to the over 100 lesson programs that have already applied for help.

The need is intense and ongoing, notes Brandon Hall, Ontario Equestrian’s Director of Marketing and Communications. “Everyone has been really set back.” The shutdown’s effect is exacerbated by the timing. “It happened just as horses needed vaccinations, dental work and de-worming and just before the year’s hay purchases need to be made.”

Summer camps are typically a riding school’s main profit source for the year, but that’s doubtful now. Evolving regulations issued by the Ontario Department of Public Health make it currently unclear whether horse camps will be permitted this season. Ontario Equestrian is working to have horses exempt from new regulations in which summer camps cannot include interactions with pets and animals. “It’s too vague to know if horses are included or not,” Brandon explains.

Haygain initially joined the school horse aid effort by donating an HG One Hay Steamer to a fundraising auction for the cause. That auction raised $24,000 and a second, larger silent auction is on the drawing board. In the meantime, a beautiful video is making the social media rounds. It depicts the Ontario equestrian community pulling together to help members in need. “We’re strong,” the voiceover assures. “Together, we’ll get through this. But not without a little help.”

Along with golf, equestrian was one of only two sports allowed to resume in Canada’s first phase of return to normal activity. Brandon is happy for all who can get back into the show ring, but he worries that “Now that everybody is getting their fix of riding, the problems that linger may be out of sight and out of mind. If you rode a lesson horse ever, or want the next person to be able to, this is the time to make a donation.”

Throughout the United States, policies limiting the number of participants in summer horse camps are the current norm: by 50% is typical.

Along with product and a much-needed cash donation to For The Herd in Ontario, Haygain is offering lesson barn operators throughout North America a 20% discount on any of its three hay steaming models.

High temperature hay steaming has many health benefits, but budget benefits may be steaming’s biggest asset right now. Horses rarely waste any of their hay after it’s been steamed. And the process makes even less-than-pristine hay appealing in taste and texture, while reducing up to 99% of the dust, fungi, mold, bacteria and allergens found in even top-quality hay. Getting those breathable irritants out of hay alleviates many respiratory issues, helping lower the cost of veterinary care. Steamed hay further helps reduce vet bills by protecting and improving digestion, hydration and overall well-being.

For The Herd welcomes individual and corporate donations. For more information, visit www.fortheherd.ca. For more information about Haygain Hay Steaming, visit www.haygain.com. For riding schools interested in the 20% discount on steamers, please call 888 307 0855 for details. Haygain will offer this discount through the duration of COVID-19-related need.