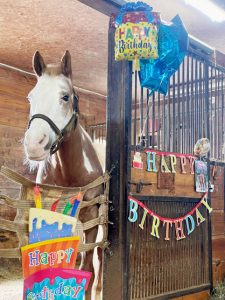 In his 25 years on this earth, Fleetstreet Max has been everything from a Breyer horse, to a 22-time APHA World Champion, to a Showmanship partner for a five-year-old girl.

The 1997 APHA sorrel overo gelding owned by Alisa Bernhard-Proefrock of Cedarburg, Wisconsin, began his rise to fame with Alisa in 2002 with his first APHA World Championship, followed by a winning spree of 22 World Championships in eight different events.

“In 2006, we became the first team ever to win both the APHA Amateur and Open Horse World Show All-Around titles in the same year,” Alisa reveals. “He won two horse trailers that year and four trailers in total! In 2008, Max broke the leaderboard for most World Championships won by a single horse. Since then, that record has been topped.” 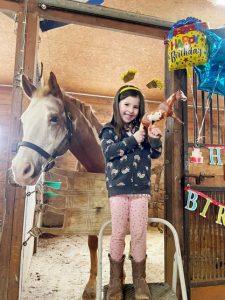 The true all-around success of “Max” caught the attention of Breyer Animal Creations, who created the Fleetstreet Max Breyer in 2010, much to the delight of Alisa, who had been Breyer-obsessed as a young girl.

For Alisa, the invitation to perform at Breyerfest was the icing on the cake. “What an honor!” she exclaims. “We had a schedule complete with meet and greets, autograph-signing sessions, and two riding performances to a packed crowd at the Kentucky Horse Park. So many horse-crazy girls!”

Alisa remembers that it was well-known that Max was always spooky at the shows, so one way he could recover from being nervous was to “trot it off.” She reminisces, “I’d toss him a loose rein and send him into a long trot that would turn into the most toe-pointing, exotic, trot gear you’ve ever seen. It may sound silly, but Max really enjoyed that 5-minute release from the normal pressures of being a show horse, and I felt it kept him in a better mental place, too.” 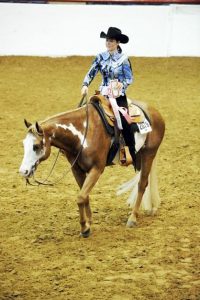 Max’s trotting laps became his trademark in his last few years showing, Alisa explains, which she attributes to the reason he never became sour.  She says, “You’re never too good or too fancy to still have fun and goof off with your horse.”

Now, as a retiree, the legendary Max has occasionally become the Showmanship partner of Clara, Alisa’s 5-year-old daughter. “Clara has recently become more interested in Max after realizing he’s more than a “retired, grumpy old man” and that he still remembers everything. When you briefly put him back to work, or put that Showmanship chain on him, he lights back up and goes back into work mode. It’s amazing to see how much he still enjoys it,” Alisa says. 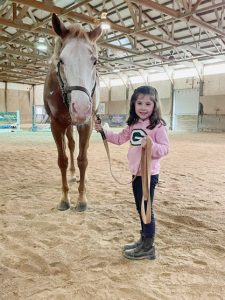 Walk-Trot Showmanship.  “How cool would that be to complete the family circle? At one point, my husband and sister-in-law had shown him successfully too,” she explains. “Then, Clara could say she learned to show from Max the legend, and Max could feel the sparkle of the show pen again. But I don’t want to put too much pressure on the idea. If it worked out, it would be a magical moment and probably my future all-time favorite memory.”

Earlier this month, Max celebrated his 25th birthday on Alisa’s parents’ farm in the same stall where he was born in 1997.  “We’re so fortunate he’s still here and kicking, so we had to throw him a party,” Alisa says.  “Many thanks to all those who have been a part of his journey.” 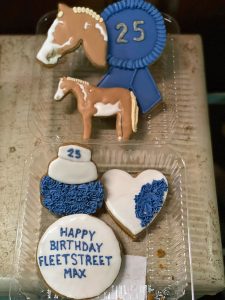 For a fun view of Max’s performance in Freestyle Horsemanship at Tulsa March Mania in 2011 (complete with a little spook and with his amazing trot), check out Alisa’s YouTube video: