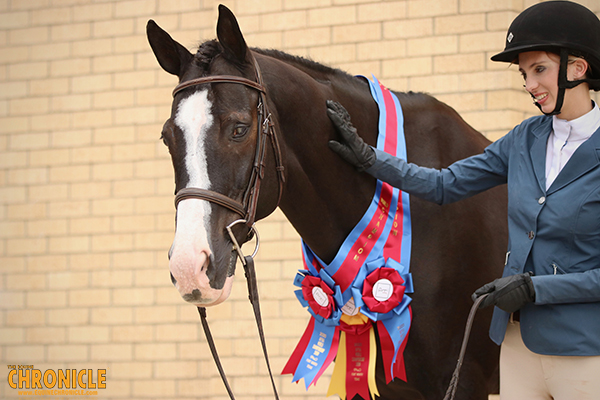 For most APHA youth competitors, the news that the Youth World Show would be cancelled this summer, due to the COVID-19 pandemic, came as a big shock. Undoubtedly, there were feelings of sadness, anger, and disappointment for those who had been working for six months towards a singular goal. Then, there came a bit of hope when it was announced that the show would instead be moved to the fall to be combined with the Open and Amateur World Show.

However, for 17-year-old McKinley Novacek, whose horse suffered a horrific injury in April, she had an altogether different experience. “It was in April of this year, and we had a storm one night,” she says. “He got really scared, and we don’t know exactly what happened, but he broke his left orbital bone. We didn’t know what happened at first, if he was going to lose his vision, or if it wouldn’t be that serious. Everything is fine now, but he is, of course, blind in that eye.”

“It wasn’t apparent right away that he was blind. At first, he could still see, but it just wasn’t right. A few days after the accident, I would go in his stall, and he would be a little startled. I stayed with him during the night. I sat outside his stall for the first few days, and I think that’s what helped him a lot.” 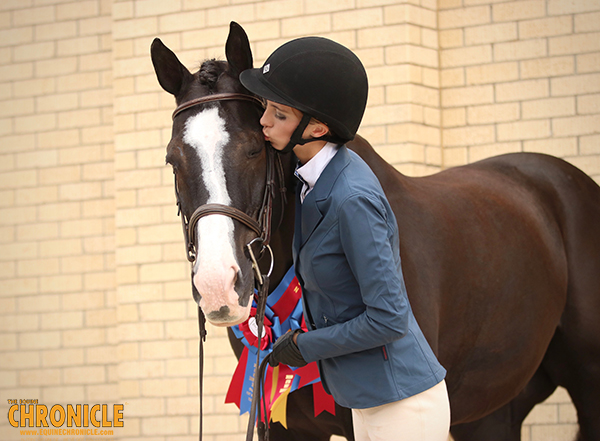 So, after training for months, one stormy night shattered all hopes of McKinley and Secret Treasure, aka “Rodger,” competing at the Youth World this year. Then, when the Youth World was rescheduled to the fall, there was a bright spot of hope that perhaps Rodger would recover in time. “It was so much better for me, and for him. I’m so glad they moved the show,” she says. “It was a Godsend, truly,” McKinley’s mother, Amy, agrees.

“Wow. It felt amazing. I didn’t know if I would actually able to do it, and I was so happy I was, especially with him,” she says. “The Hunters was amazing, except we did start off on the wrong lead, but everything else was the best ride I’ve ever had. He was so good. That was the class that I got Reserve in. Then, the other two classes were amazing as well, and I was the World Champion in both.”

“Over Fence classes are just more challenging to me than the flat classes. You don’t just sit there and look pretty. You have to think about how to move your body and be one with your horse and in sync.”

Certainly, show preparation is a bit different now than it used to be before Rodger’s accident, but horses are surprisingly adaptable creatures and he has learned how to rely on his other senses.

“This morning, I went in there at 5 am, and I got a feel for how he was in the arena. He felt amazing, so I wanted to keep everything the same, and that’s how we won. I have to think about where his head is at, because he doesn’t know where he’s going on that side, so I have to be cautious of other horses when I’m in the ring while practicing. Then, if there is something that moves in the stands, or is slightly different, I have to make sure that he knows it’s not important for him to freak out.”

“He doesn’t see the jumps that well, but he’s amazingly well-trained. After I took a few jumps, he knew where the standard was and where he should go.” 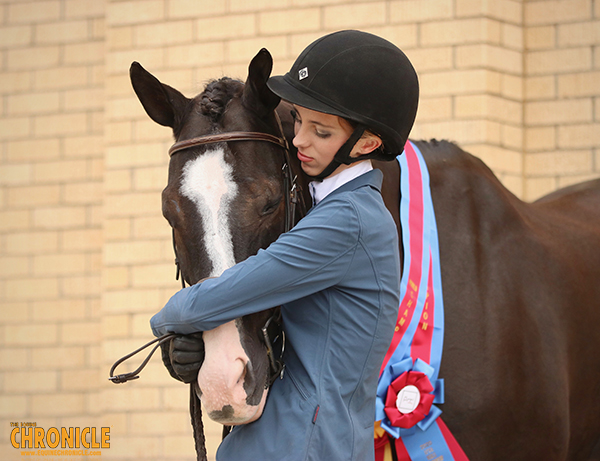 Assisting McKinley and Rodger with their show preparations was Sarah Ward of Willow Creek Equestrian Center. Later this year, McKinley hopes to travel to more Hunter-Jumper specific shows. “Well, my goal was to win a World Championship title, so I already accomplished my goal, and I will have to figure out a new one! I was shocked. No words. It was amazing. A lot of time and effort…”

Even though Rodger has to do things a little differently than he used to, he’s still the same old goofball. “He rubs all over me when I’m in his stall, and every time I get off him he waits for treats. He loves peppermints and Oreos.” We’re certain that he will be getting a bucketload of his favorite treats today after that performance.

McKinley has some advice for those who might have a horse that has sustained an injury keeping them from riding or even showing. “Things work out in the end. I feel like if you just stay positive and keep moving in the direction you want to go that you will accomplish your goals. And be patient…”