From The Lab- Clenbuterol Threshold Recommendations 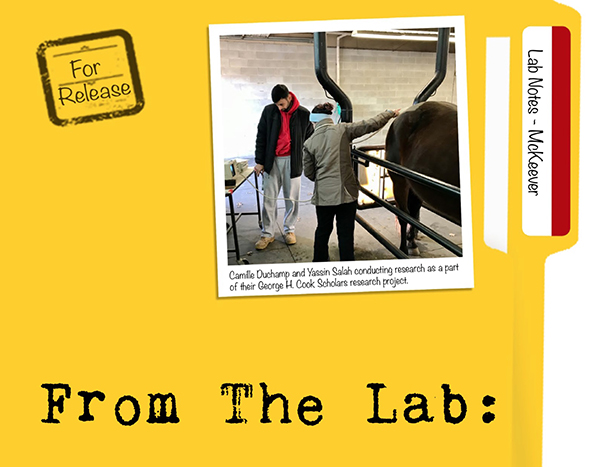 Inflammatory Airway Disease (IAD) is a widespread condition in horses resulting in impaired gas exchange and interference with optimal performance. This respiratory condition can affect as many as 80% of all 2-year-old racehorses, and 14% of racehorses of all age groups.

Clenbuterol is a FDA approved oral Beta 2-agonist used for the management of IAD and airway obstruction in horses. Administration above the dose currently recommended by the manufacturer produces repartitioning effects, which have led to restrictions on its use in Quarter Horse and Thoroughbred racing. The goal of this study was to identify a withdrawal time guideline for its use at dose levels recommended by the manufacturer and the Association of Racing Commissioners International (ARCI) for harness racing.

Eight, healthy, moderately fit, Standarbred horses were administered 0.8ug/kg of clenbuterol as Ventipulmin syrup twice daily for three days. Blood samples were collected prior to dosing and at 1, 24, 48, and 96 hours after administration. There were no effects of clenbuterol on any of the measures including fat mass and fat free mass and thus no repartitioning effect was observed. Pharmacokinetic data for the 96-hour set support the therapeutic use of clenbuterol in harness horses at the ARCI recommended 0.8ug/kg twice daily dose for three days and suggest a 41pg/ml regulatory threshold for a 96-hour withdrawal time.

#1- This study was performed to delineate the terminal elimination of clenbuterol after administration at the low end of the therapeutic dose range of 0.8ug/kg, twice daily to Standardbred horses for three days followed by a 96-hour withholding period.

#2- These data suggest that a 41 pg/mL plasma threshold following 96-hours of withholding of clenbuterol is a practical threshold to regulate the use of a three-day, twice daily 0.8 ug/kg administration protocol in harness racing where the horse may race again 96 hours after the last administration.

#4- Clenbuterol has been shown to induce repartitioning effects, a decrease in fat mass and increase in fat free (muscle) mass, starting in the middle of the recommended dose ranges (2.5ug/kg, twice daily). Those changes do not translate into improved equine performance.

#5- These changes actually have been shown to cause a decrease in markers of aerobic and anaerobic performance.

BACKGROUND NOTE: On November 1st, 2015, the American Quarter Horse Association announced that clenbuterol would be considered a forbidden drug per AQHA Rule VIO401. Earlier that year, positive drug tests in AQHA racehorses resulted in significant penalties, and the policy was expanded to put an end to the abusive use of clenbuterol in show horses in time for the AQHA World Show. In order to avoid a positive test, AQHA recommended a 60-day withdrawal time.

“A bronchodilator marketed as Ventipulmin, clenbuterol is a legitimate and valuable medication used by veterinarians to treat horses with breathing difficulties, but its use has gotten completely out of hand because of its ability to act as a beta-2 agonist to increase muscle mass when used in dosages exceeding recommended amounts.” (AQHA release, 2015).

Then, in 2019, AQHA announced that a similar medication, Albuterol, which has similar systemic effects to clenbuterol, like increasing lean muscle mass, would be considered a prohibited substance per AQHA Rule VIO401 on January 1, 2020.

“Earlier this year, the American Racing Commissioners International implemented a no allowable limit of detection for albuterol in American Quarter Horse racehorses. To establish consistency across disciplines, albuterol was added to the list of prohibited substances to prevent it from becoming an emerging problem in our show horses.” (AQHA release, 2019)