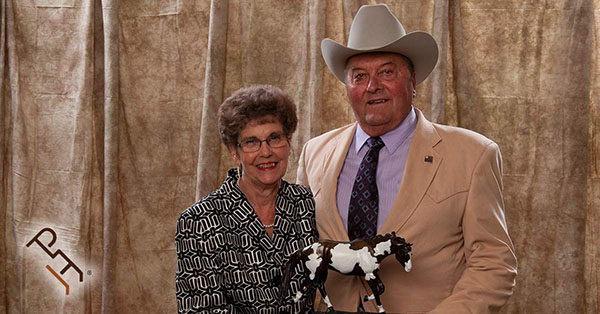 A lifetime APHA member, Fred was a national director for 49 years and served on every APHA advisory committee as either a member or EC liaison during his tenure. An APHA judge since 1977, Fred retired from judging in 2010 and was honored in 2017 with APHA’s Judge Emeritus award.

The horseman from Wilcox, Nebraska, purchased his first Paint in the early 1960s, a mare named Sugar Sue, who was the 1968 reserve national champion reining horse. Paired with his wife, Marian, Fred’s Adam Ranch bred 238 registered Paints over more than 50 years. The couple stood several notable stallions as well, including Bar Mount and Chicka Mount, APHA Supreme Champions No. 5 and No. 24, respectively.

“Some people are addicted to horses; I’m one of them,” Fred said in a January 2016 Paint Horse Journal article.

For their contributions, Fred and Marion (pictured above) were inducted as part of the APHA Hall of Fame’s inaugural class in 2012.