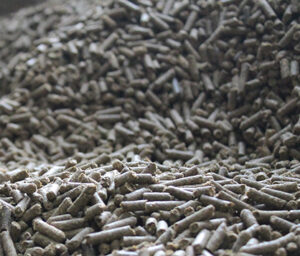 In the past few years, extreme environmental conditions such as excess rain, drought, and natural disasters have affected pasture and hay availability in many areas of the country. In these situations, horse owners are faced with the challenge of finding good-quality forage sources, which may be scarce or cost-prohibitive. A forage alternative may be an appropriate choice for a horse that requires nutrient consistency to help manage a nutrition-related medical condition.

The term “forage alternative” may be used to define a high-fiber feed that can be used safely as a substitute for the forage component of a horse’s diet. The term may also be used for a  nontraditional forage or byproduct roughage fed to horses and other livestock.

Commercially prepared high-fiber feeds that contain adequate fermentable fiber and indigestible fiber to serve as forage alternatives are also commonly referred to as “complete feeds.” These products not only contain adequate forage and roughage ingredients to meet a horse’s fiber needs, but they are also nutritionally fortified and balanced to meet all nutrient requirements of the horses for which they are designed.

In addition to fortified complete feeds, other forage alternatives are appropriate as partial or complete replacements for hay or pasture.

Several “hay stretcher” products are offered by feed manufacturers that may or may not be fortified complete feeds.  A hay stretcher that is not nutritionally fortified would be appropriate to replace the forage in a horse’s diet, but would not necessarily be sufficient to meet all nutrient requirements. These products usually can be fed to replace hay pound for pound in the ration, and either a vitamin and mineral supplement, ration balancer, or concentrate feed would also be offered to result in a nutritionally balanced diet.

Additional forage alternatives commonly used in horse diets include hay cubes, pellets or blocks, chopped hay, and beet pulp (shreds or pellets). Several less traditional alternatives have appeared on the market in the past few years, including pelleted soy hulls, haylage, and fodder.

Processed hay (cubes, pellets and blocks) can be fed pound for pound to replace hay in the ration.  Usually, these products are simply processed hay, either alfalfa, grass, or a mixture, with the same potential quality and nutrient variability as the long-stemmed equivalents. However, intake of processed hay is often more rapid than long-stemmed forage, so it may be beneficial to offer smaller meals spaced throughout the day.

Beet pulp, either shreds or pellets, may also be used as a forage replacement but should only be used to partially replace hay/pasture (limit to 50% replacement) due to the low amount of indigestible fiber or bulk. Further, it may be preferable to soak beet pulp for horses with increased risk of choke. Compared to grass hay, alfalfa and beet pulp are higher in calories, so feeding rates may require adjustment.

Chopped hay has become more popular in the past several years in the U.S. Benefits include consistency, convenience, and palatability. Some people view the fiber length as a benefit compared to pelleted forages. Nutrient content and quality can be a concern, however. Nutrient guarantees and certain ingredients of some products—such as straw—can greatly decrease nutritional value for horses. Chopped hay is sometimes mixed with molasses to increase palatability, which could render it inappropriate for horses with sensitivities to soluble carbohydrates.

Pelleted soy hulls have been used as a forage alternative, though nutritionists often recommended limiting the replacement to no more than 70% of the forage. Soy hulls are seen less often as a viable forage alternative for horses due to limited availability, inconsistent quality, and lower palatability than other options.

Haylage as a forage source is more common in Europe than in the U.S. Haylage is chopped hay that is harvested and preserved by ensiling rather than traditional drying; it is sealed in plastic, allowing some fermentation to take place. Haylage is higher in moisture content than baled hay, and horses fed haylage may be at a higher risk for digestive upset due to the possible presence of mold or other toxic substances. Haylage should be fed quickly once the package is opened to reduce the risk of mold development.

Hydroponic fodder has appeared on the market in the U.S. fairly recently. Hydroponic fodder is hydroponically grown cereal grain, grass, or legume sprouts. Little nutritional information is available on fodder for horses, but concerns include high nutrient variability, low fiber content, poor mineral balance, and mold due to the high-moisture environment inherent in hydroponic growing systems.

If a forage alternative is the best option, there are several management considerations to keep in mind:

While shortages of hay and pasture create challenges in offering optimal rations for horses, taking advantage of forage alternatives can help horse owners provide quality nutrition to their horses.