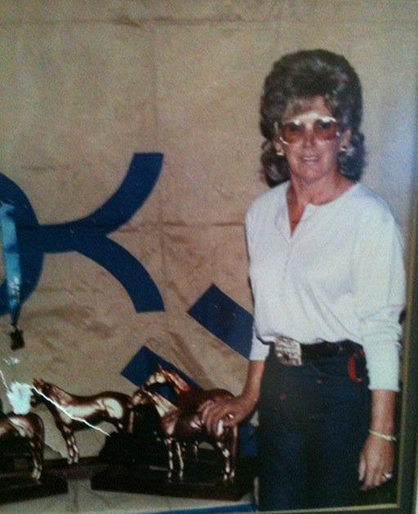 On October 10th, horse industry veteran, Delores Darlene (Dee) Bartek, passed away at the age of 79.

Close friend, Claire Nichols, has plenty of fond memories of their time spent together.

In January of 1995, I contacted Dee about breeding a mare to Temon. I hadn’t ever met her, but she instantly took me under her wing finding me a Futurity breeding and telling me about a good mare that she thought  would be a good cross on her stud. We bought Brilliant Conclusion. She was in foal, but we chose to buy only the mare and not the foal she was carrying. Unfortunately, the mare foaled unexpectedly and a large colt tore through her rectum and died. We were in the processing of moving from Missouri back to Texas, so Dee kept the mare, keeping her clean, giving her antibiotics, and keeping up with her reconstructive surgery. It was late in the year and Dr. Donnell bred her one time carefully inseminating her with a straw. Miraculously, she was in foal.

In 1996, she had a beautiful filly that I named Temons Brilliance. She was late and we waited until her yearling year to show her. Kathy Smallwood fit her and we had a very successful show season. Brilliance won The Houston Livestock Show, Lone Star Quarter Horse Futurity, and was Circuit Champion at several big shows. I felt really good about showing her at the World Show.

The class was big and deep, and I didn’t win a top ten jacket. It was something I had hoped for all year. Dee won more than one top ten jacket and graciously gave the extra to me. The jacket meant more to me than if I would have actually won one with my pretty filly.

When it came time for Dee to put Temon to sleep, she asked if she could bury him, and a special daughter she had cremated, on our farm. Temon and Special Te I Am are buried beside our home. I will always be grateful for everything she did for me, the funny stories, and I will always miss her.

Our condolences go out to Dee’s family and friends following her passing.