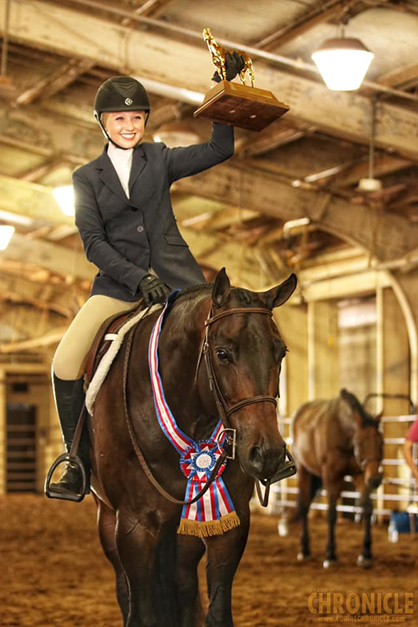 Due to the addition of Level 2 and Level 1 classes at this year’s AQHA Youth World Show, we had numerous winners in the same discipline today. First, Brooke Jolstad and Betta Believe It were named the World Champions in L2 Equitation.

8-year-old “Maurice” and 15-year-old Brooke have been a team for four years now under the guidance of Kelly McDowall Quarter Horses. They had a marathon day with a class that started at 8 am and finished at 3 pm. Brooke and Maurice were seventeenth in the draw, so they had a long wait ahead of them. “We got him out early and loped him around to get him all loosened up. He was really good in the preliminaries, but I needed to look up and keep my elbows in for the semi-finals. So, we watched Ranch Riding, put him to bed, and hung out with him while he was lying down in his stall. Then, we got him ready all over again.”

Brooke was very pleased with her second pattern as well, except for one little bobble that she thought might have cost her a spot in the finals. “He was really good, and I kept my eyes up and everything; but, the one thing we always work on is the back. He threw his head up and I thought, ‘Well, that’s it.’ But we stuck around to see what happened, and we made it back.” 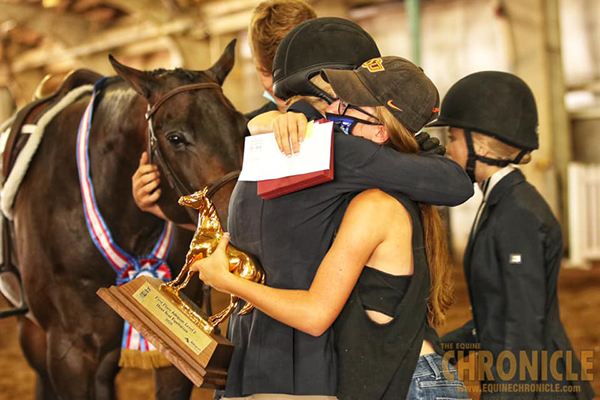 “I really did improve on getting my diagonal, and our hand gallop is always super pretty and fast around the edge. He was so good and came back to me when I needed to slow down.”

Earlier in the show, Brooke and Maurice were the Reserve Champions in Performance Halter Geldings. Now it’s on to Trail and Horsemanship. 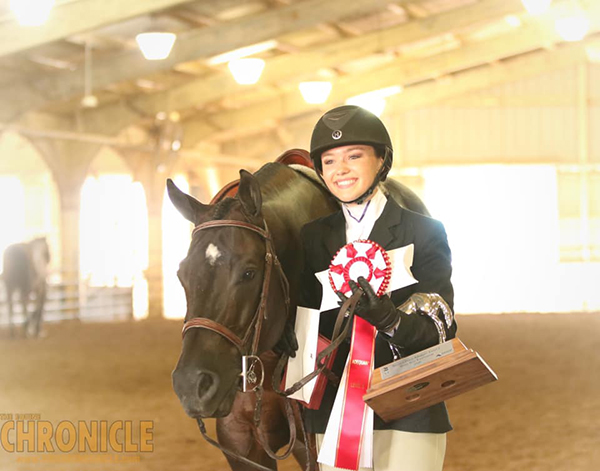 Reserve was Jessica McAllister with Midknight Invitation. Third was Shaelyn Boutelle with Beau Patrick. Fourth was Rebecca Figueroa with Check Required. Fifth was Madison Musser with Good At Da Bar.

In Level 1 14-18 Equitation, Lucy Lewis rode See My Shiny Hiney to her first big win at the Youth World. Reserve was Holly Sarah Phalen with VS Code Victoria. Third was Cassidy Fritz with Sleep Walking. Fourth was Mimi Catherine Copeland with Hot Time To Zip. Fifth was Cold Jacobs with Eli Investing Wisely.

Lucy is 19, so this is her last year competing in the youth division. Primarily an APHA competitor, she has just recently gotten more involved in AQHA competition. “I just started leasing Grampy from Shelley Grissom,” she says. “Before that, he was retired. I show APHA mostly, but have gotten into Quarter Horses for the past couple of years, showing whatever horses I can, and Shelley was nice enough to let me show him this year.” 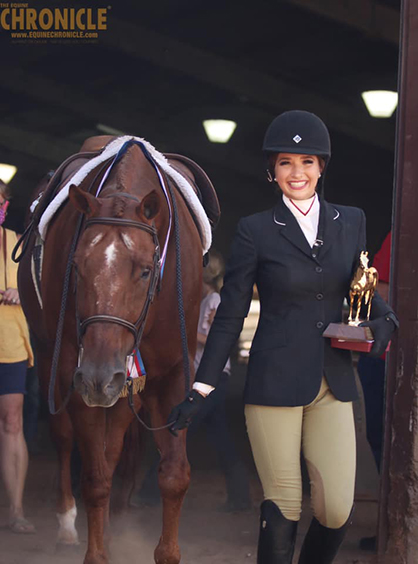 Assisting Lucy and Gramps with preparations for today’s class was Megan Vanderslice. A little guidance and motivation was definitely needed before the Level 1 class after a small misstep put them out of the running in the Level 2. “I went in the Level 2 right before this and picked up the wrong diagonal, so I was really discouraged going to the Level 1; but, I was also excited, because I like to go fast and there was a hand gallop. That part was probably my favorite. I also liked the shape of the pattern, which made it easy to show. He’s a big horse, so smaller turns are harder for us.” 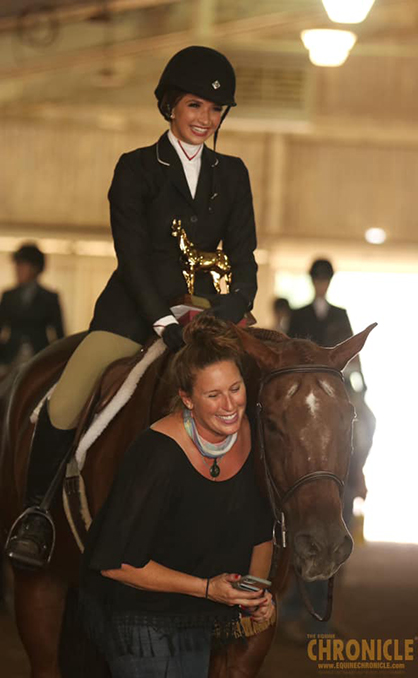 Lucy was also a bit concerned about the lead change, since she’s had some issues with that maneuver in the past. “He’s completely finished with his lead change, obviously, but I’m not good with lead changes. So, coming down from the hand gallop into the canter and into the lead change was concerning.”

Thankfully, Lucy and Gramps were able to nail their lead change and grab the golden trophy. Last year, there were the Reserve Champions in Level 1 Hunter Under Saddle, but this is their first win. Coming up next, they will compete in L1 and Level 2 Horsemanship and L1 Trail. But first, Lucy has to head to Stillwater to move into college.

In 14-18 Equitation, returning champion, Nya Kearns and BMQ Stop For Traffic, were named the winners once again. The Reserve Champion was Isabella D’Onofrio with Nearly Chocolate. Third was Caroline Fredenburg with Suddenly Sophisticated.

Nya and Merlin have been a team for the past six years. As the daughter of horse trainers, that’s the longest she’s ever been able to keep a horse of her own. “He’s for sure a special part of our family. We cherish him like a pet. He’s 16 years old now.”

Nya is 18, so this is her last Youth World. She has won this class three times now- 2016, 2019, and 2020. “With it being my last year, I always thought I would be so nervous and there would be so much pressure, but I wanted to channel that away and have a very easygoing mindset without stress. I wanted to be happy to be here since we didn’t know until a few months ago if we were even going to get to be here.” 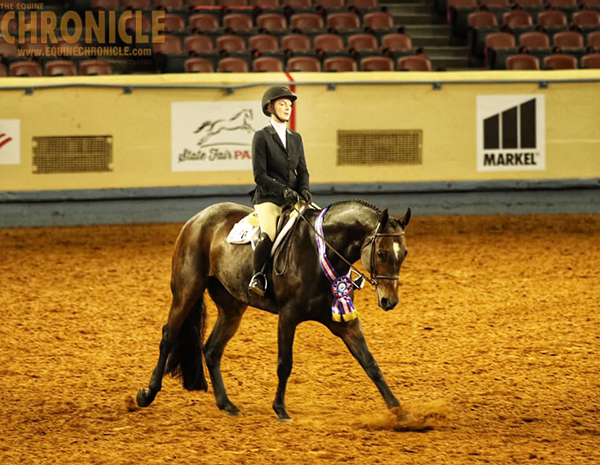 The finals pattern had some challenging maneuvers, but that’s exactly the kind of pattern that Nya likes. “There were difficult sections, but we’re at the Youth World, so I think the pattern should be challenging. The leg yield is not something we do at all the regular horse shows, so I think that was my favorite piece of the pattern. It was a very forward pattern, which I like.”

“I think the leg yield was one of our stronger pieces, and he moves out really nicely, because he has a long stride. He’s about 16.1, and has a Huntery neck, but he’s beefy like a Western horse in the body.”

Earlier in the show, Nya was fourth in Showmanship with her other horse, Iresistable Krymsun. Next up, they will compete in Horsemanship. Then, she’s off to school to compete for the SMU Horsemanship team. 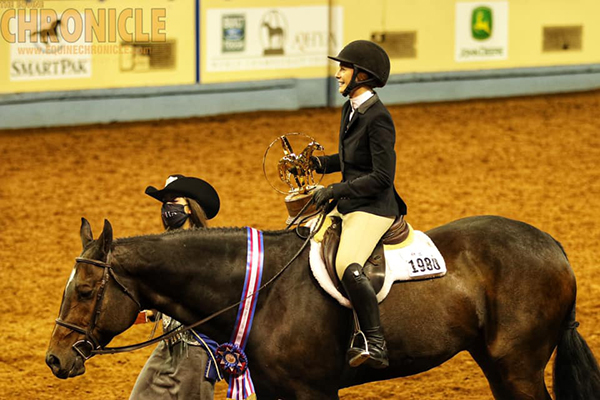 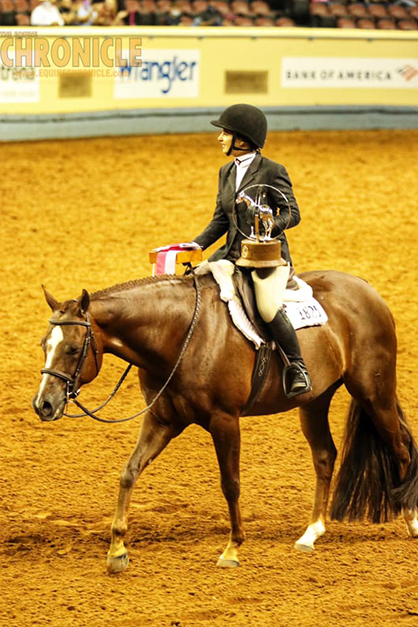