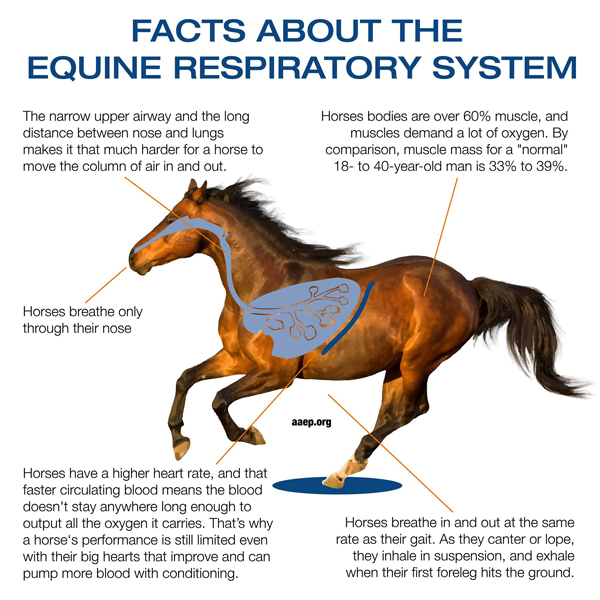 Reasons for an airway evaluation in an adult horse include coughing, bilateral nasal discharge, exercise intolerance, and/or increased respiratory rate either at rest or during work. Coughing, whether acute or chronic, should form the basis of a lower airway examination, especially if accompanied by a fever, increased respiratory effort at rest, reduced athletic performance or exercise intolerance.

The respiratory tract begins at the nostrils. It continues through the nasal passages, pharynx, larynx, trachea, and the lungs. The nasal passages contain small bones called turbinates which are covered in respiratory epithelium that helps to remove debris and microorganisms found in the air. The paranasal sinuses are hollow spaces around the nasal passages where the reserve crown of the teeth reside. It should be noted that horses are obligate nasal breathers and cannot breathe through their mouths.

The pharynx lies beyond the nasal passages and contains the openings of the guttural pouches. These pouches hold 300-500 ml of air or purulent discharge. There are numerous blood vessels and cranial nerves in and around the pouches that can become affected from guttural pouch diseases.

Air then passes to the larynx, comprised of the epiglottis and the arytenoid cartilages. Through the arytenoids lies the rima glottidis, the potential space between the vocal ligaments contained within these intrinsic ligaments and membranes. This continues to the trachea.

The trachea is a long tube made of cartilaginous rings to conduct air to the lungs. The mucociliary apparatus of the trachea moves in a wave-like motion, helping to clear mucus and other debris from the airway, preventing lower airway infection. The trachea divides at the carina into the two mainstem bronchi, one for each lung. These subdivide into smaller and smaller bronchi and bronchioles, which lead to the air sacs or alveoli, where gas exchange takes place.

The pleura are the two membranes, actually one continuous one folded on itself, that surround each lobe of the lungs and separate the lungs from the chest wall. This potential space typically contains a small amount of fluid, but when infected can contain many liters of fluid.

SIGNS THAT A HORSE MAY HAVE AN UPPER OR LOWER RESPIRATORY TRACT DISEASE:

Any good examination begins with vital signs and routine blood work. The horse’s respiratory rate is 12-20 breaths per minute. As the respiratory tract begins at the nostrils, examination should begin there, feeling the force of air movement and noting nostril flaring. Auscultation of the trachea and lungs is next, usually employing a rebreathing bag. As we cannot ask the horse to take a deep breath, a bag is placed over the horse’s nostrils, which increases the concentration of carbon dioxide and makes the horse breathe more deeply so that the deeper regions of the lung may be heard at the surface.
Breath sounds are normally quiet. Sometimes they are loud crackles or wheezes. Sometimes they are altogether absent. Fluid sounds may be heard in the trachea.

Video endoscopy is a camera system use to evaluate the airways. The image is sent from the camera on the end of a flexible tube to a computer and monitor, allowing visualization of the respiratory structures.

Ultrasonography is used to diagnosis soft tissue abnormalities. It can be used to diagnosis tendon and ligament sprains, pneumonia, abnormalities in the abdomen, and identify what soft tissue structures are involved in a wound. In the lung, it is used to look for pleural fluid and solid structures, such as abscesses. Ultrasound cannot image structures deep to air in the lung, as the sound waves are not carried through air. If deeper regions of the lung can be seen, the lung is consolidated.

Diseases of the Respiratory Tract