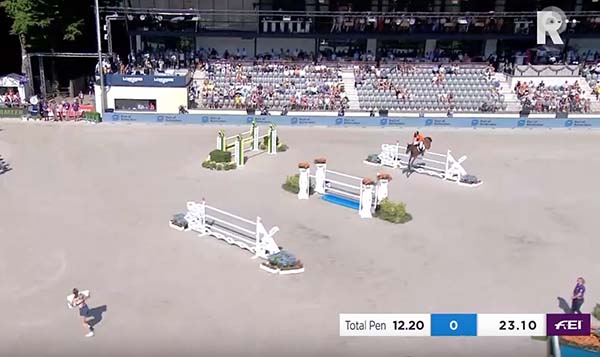 In today’s society, protesters have become a commonplace sight at nearly any type of event that garners enough media publicity for their message to be seen and heard. Whether it’s at a sporting event, political rally, or even the opening of a new business, there typically isn’t a big problem, so long as the protest is peaceful. However, when the actions of a protester threaten the safety of other individuals present, authorities must intervene.

That’s exactly what happened at the recent FEI European Championships in Rotterdam when a young woman ran out onto the course while Marc Houtzager was riding Calimaro. The protester had the phrase, “Stop horse slavery,” painted on her body and held a sign that said, “Horse beating is not a sport.” She was able to evade capture by officials and ran right in front of the pair while they were attempting a difficult triple combination jump. Thankfully, no one was injured during the incident.

Amazingly, Marc and Calimaro came across the finish line with a clean round with only a time error fault, which was later removed by the jury considering the unusual circumstances. He exited the pen to a standing ovation from the crowd and later placed eighth in the event.