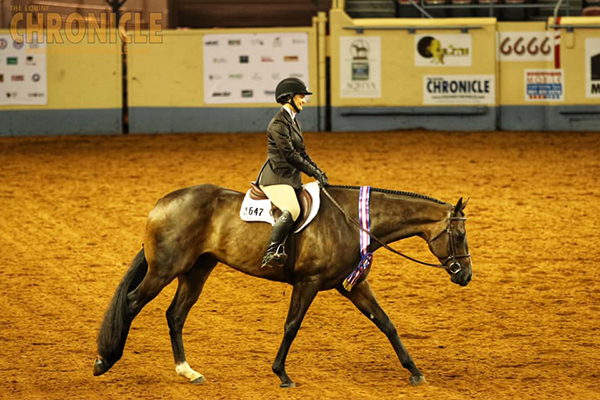 It was an exciting morning here at the AQHA Youth World Show, because our Equine Chronicle Cover Girl, Natalie Vargo, rode her horse, Skye Miles, to win 14-18 Hunter Under Saddle! Just the other day, she led She Had Me At Hello to a Reserve finish in Performance Halter Mares. Today, she was in the saddle of her four-year-old giant of a horse- Skye Miles.

“It got a little nerve-racking, because it’s his first World Show, and I’ve only shown him a few times,” she says. “He’s only four. He was amazing. I couldn’t have asked for anything more. There were some really good horses out there today.”

“We’ve had him since he was a baby. My Mom bought him from Chuck Briggs and we raised him and have floated him around for a while. We decided that since it was my last Youth World that we should just go for it.” 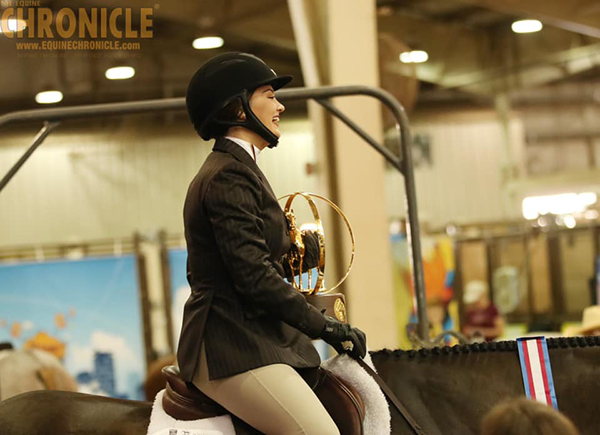 “Luca” is a big boy- standing at 17.2 hands tall. Because of his size, Natalie had a specific plan when she entered the pen for the finals. “My plan of attack was to find the best spots I could because he’s so much bigger than the other horses out there. His stride is so slow, but I tried not to look like I was lapping people too much. I tried to ride slow and find a good rhythm. I tried to stay towards the outside, and, for the most part, I had really good rail spots.”

Natalie describes Luca as the most laidback horse she’s ever owned. That’s a trait that will come in handy because she hopes that Jumping and Pleasure Driving will be in his future. “He loves his job and is such a show horse. We barely have to longe him or prep him. He’s so natural and is always right there for me.”

Now that Natalie and Luca have taken their official win photo and done their interviews, Natalie will head over to the Performance Arena to ride She had Me At Hello, aka “Georgie,” in the 14-18 Trail preliminaries. Then, they will compete in the 14-18 Western Riding finals tomorrow and Horsemanship on Wednesday. 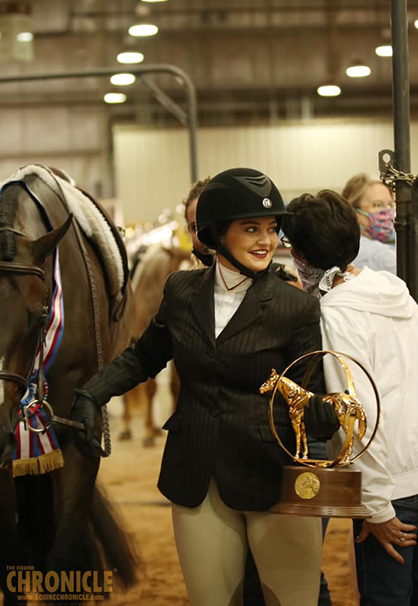 “I want to thank Suzy Jeane and Chuck Briggs so much. Chuck helped us find Luca and has been my horse trainer for a long time. Suzy is like a mom to me, and I cannot thank her enough. I’m really thankful for my last youth year and to everyone who has helped me, including my Mom and Dad and trainers, Carly and Wade Parks.”

Reserve was Alexia Tordoff with Too Blazin Cool. Third was Kaitlin Smith with Always Decked Out. Fourth was Bella D’Onofrio with N A Heartbeat. Fifth was Olivia Koontz with Zippin Hot Harley.