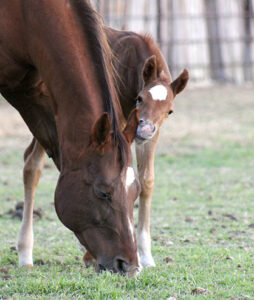 Foals frequently pull the focus of farm managers during the weaning process, as they are far more susceptible to post-separation problems than their dams. Plus, they’re usually noisier during the process! Most mares, especially older ones, accept weaning with aplomb, but careful attention should be paid to them in case other concerns arise.

Mastitis. Although it is not common, some mares suffer from mastitis, or inflammation of the mammary glands, following weaning. Expect this problem to crop up within a few days after pulling the foal. One or both sides of the udder might be affected. The mammary glands can become so tender that mares might refuse to allow palpation, so care should be taken during an examination. Some mares will be so sore that they walk stiffly behind, almost as if they are lame.

A veterinarian should be called immediately, and can determine the best course for these mares, including appropriate antibiotics. Untreated mastitis in mares could make one or both sides of the udder permanently nonfunctional, so it is imperative that any infection be cleared quickly.

Weight gain. Nourishing a foal, especially a robust one, can sap a mare of her energy stores, and this shows up as weight loss. Not all mares will suffer this fate, especially if diets have been managed to account for the inevitable energy drain. Others, such as hard keepers or older mares, might lose weight during peak lactation no matter how well fed they are.

“The period of time between weaning and foaling is the best time to increase body condition of thin mares,” said Kathleen Crandell, Ph.D., a nutritionist with Kentucky Equine Research (KER).

“After mares have completely dried up—that is, no longer producing milk—begin feeding an energy-rich diet that includes good-quality forage and a concentrate formulated specifically for broodmares. Feed the concentrate at the recommended levels,” recommended Crandell.

Because the caloric burden of lactation is no longer a factor, these mares will likely gain weight quickly. Weight gain should not be rushed, however. Gradually increase feed intake over a period of about two weeks, and make all changes to the diets slowly.

“Once the mare has achieved the desired body condition—and that might be a smidgen above optimal if weight loss is a known problem during late gestation or lactation—then the ration can be re-evaluated and tweaked to maintain the preferred weight,” commented Crandell.

Special procedures. Some maintenance work is difficult to do when mares are in late gestation or lactation, so the period following weaning is an opportune time. Routine dental maintenance is often best done when there is no foal afoot, as is other veterinary and farrier work that cannot be achieved when a mare is in late pregnancy.