With more than 400,000 different combinations of equine blood types, veterinarians often face a challenge when finding the best match for horse blood transfusions.

New research by Penn Vet clinicians tested a blood cross-matching method used in human medicine. Results of the study showed that a gel column test is more efficient than the traditional test-tube method, and is equally as effective.

A second portion of the study, conducted simultaneously, involved blood typing. Results showed that using a stall-side test kit is as effective in predicting the Ca blood type as sending the blood to a laboratory. 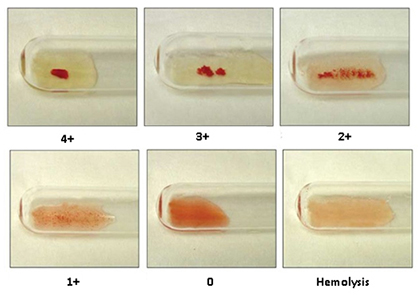 The goal of the first part of the project was to study different ways to test for blood compatibility. Testing allows clinicians to use blood that is most compatible for the animal, so the patient doesn’t have adverse reactions following a transfusion. This testing is similar to what is done in human medicine.

The traditional method for evaluating blood compatibility is cross matching, mixing the blood from the donor horse with the proteins of the blood from the recipient to discover if there is an adverse reaction. The test is done in a tube, and takes between two and three hours.

For this study, clinicians used a gel column to perform the cross match, a method used more commonly in human and small animal hospitals. A gel column incubator and centrifuge are needed to conduct the test. Results showed that the gel column method was as accurate as the standard tube cross match, and took approximately half the time.

Test results were available between one-and-a-half and two hours, compared with two to three hours for the tube method, Luethy said. Also, less blood was needed for the test, only drops.

The study showed that the gel column method had similar performance in predicting blood compatibility compared to the standard tube cross match.

This method “is easier to read and faster to perform,” Luethy said.

The gel test is a suitable method for evaluating compatibility prior to blood transfusions in horses, the study concluded.

Another positive feature is that the gel test is stable and can be preserved, so clinicians have the opportunity to consult with others, Luethy said. In contrast, a tube test can only be observed once. One of the downsides, however, is that the gel column test may not be appropriate to test for hemolysis, the breakdown of blood cells. But that may not be as significant a factor in horse cross matching as previously thought, Luethy said.

Blood typing a horse involves molecular biology, using antibodies to identify a particular blood type. There are seven recognized equine blood group systems – A, C, D, K, P, Q, U – but more than 400,000 antigenic combinations. Traditional blood type testing is conducted at only a handful of labs in the country, so it can take three to five days to get results.

The researchers tested a stall-side test kit that involves placing an immunochromatographic strip into a small amount of blood. “It’s like a human pregnancy test,” Nolen-Walston said. The test strip contains the antibody for that type, in this case type Ca. If it lights up, it is Ca positive.

The horses in the study had been blood-typed prior to the test.  “The test strip had excellent prediction of Ca blood type,” Luethy said. “It was 100 percent accurate. It holds promise for stall-side blood typing.”

Of the 33 horses, three were Ca negative and 30 were Ca positive.

The ability to blood type a horse with immediate results stall-side would be a great advantage and convenience, especially for veterinarians out in the field, Nolen-Walston said.

The research was a proof of concept, meaning in the future these kits could be developed to evaluate multiple blood types in horses. The Ca test kits were provided by Alvedia, a veterinary diagnostic company.

The study was supported in part by the National Institutes of Health.