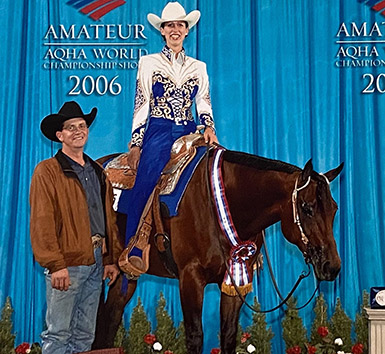 The National Snaffle Bit Association is sad to report that AQHA show mare, Sweet Talkin Jeannie, has died at the age of 22.

Bred by JS and Virginia Fulton Jr., Sweet Talkin Jeannie was by NSBA Hall of Fame Stallion Sweet Talkin Chip and out of Jeannie Straw.

Sweet Talkin Jeannie began her show career as a futurity horse, placing in the top five in a number of major futurities, including the All American Quarter Horse Congress, Just For Pleasure, and Dixie Nationals, first under the guidance of Doug Pratt and later Bret Parrish.

Following her show career, Sweet Talkin Jeannie passed along her athletic ability to foals such as Krymsun Kryptonite, Lope Out The Doubt, My Ace Is Hot, and Jeannie In A Bottle.

NSBA shares its condolences with the Bell and Meredith families.