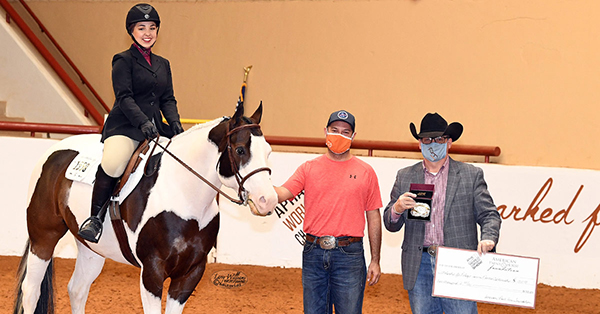 Bryanna Carney of Port Orchard, Washington, wasn’t expecting to walk out of her Novice Youth Hunter Under Saddle 14–18 class with a $1,000 scholarship. Winning the Robyn Hanna Sportsmanship Award came as a total surprise to Bryanna and receiving the trophy buckle and scholarship was the icing on the cake.

The Robyn Hanna Sportsmanship Award is presented to a Youth exhibitor at the APHA World Show who demonstrates high moral character and good sportsmanship. The winner is expected to demonstrate that the APHA World Show is about good sportsmanship and showing respect for the discipline. Throughout the show, anonymous judges have been on the lookout for someone who displays these traits, and Bryanna is certainly a shining example of what the award is all about.

This is Bryanna’s first time competing at the APHA World Show and her partner, Top Hats Only, has helped her achieve success in and out of the show pen. So far, the pair have won a reserve world title in the Novice Youth Horsemanship 14-18, among other awards. She feels honored to have won the sportsmanship award and says her first World Show experience has been amazing with lots of inviting new faces. When Bryanna isn’t in the arena, she can be found around the show grounds supporting her friends and making new ones.

“It’s been great to meet new people and talk about our rides. Everyone has been super supportive and kind,” Bryanna said.

After winning this award, Bryanna hopes to inspire other exhibitors to carry on the attributions that come with the title. She encourages everyone to continue supporting and cheering each other on for the remainder of the show!