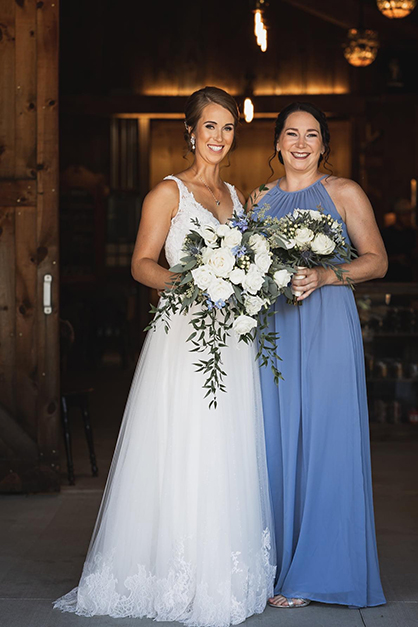 For most of us who’ve grown up in the horse industry, we’ve made lifelong friends who share our love of horses, the sport, and all things equine. More often than not, those friends cross over into our daily lives, and we end up spending more time with them outside of the show pen than our own families. That’s the case for Caitlin Arthur and Michelle Bowman (McDowell).

They’re best friends who both live in Michigan, grew up competing at the collegiate level, and love showing Reining horses. Just one month before the Congress, Caitlin was a bridesmaid in Michelle’s wedding. At the Congress, both ladies won Congress Champion titles in Level 1 Amateur Ranch Riding.

This is their story.

Caitlin lives in Midland, MI, where she works in sales for DuPont. Michelle lives in Wayland, Michigan and teaches 4th grade at Gilkey Elementary School. They both grew up showing horses in their local 4H club and moved on to APHA (Caitlin) and AQHA (Michelle) before competing during their college years.

“I showed for Saginaw Valley State University, and Michelle showed for Grand Valley State University, which is where we met,” Caitlin says. “We quickly learned that we were very much alike, and our competitive nature actually made us close friends! We got hooked on Reining during college. We eventually both bought Reining horses and show together on the Michigan, Indiana, and Ohio Reining horse circuits.”

On September 5th, Michelle got married at Inisfree Farm in Pullman, MI. Front and center in her wedding party on her big day was her best friend, Caitlin. “The day of the wedding, we were talking about the upcoming Congress: comparing our checklists and looking at our patterns together, all while getting our hair and makeup done! After the wedding, Michelle returned to work and was continuing to ride to prep for Congress. We would text almost daily about what classes we were in, entry count, and what day we were both arriving.” 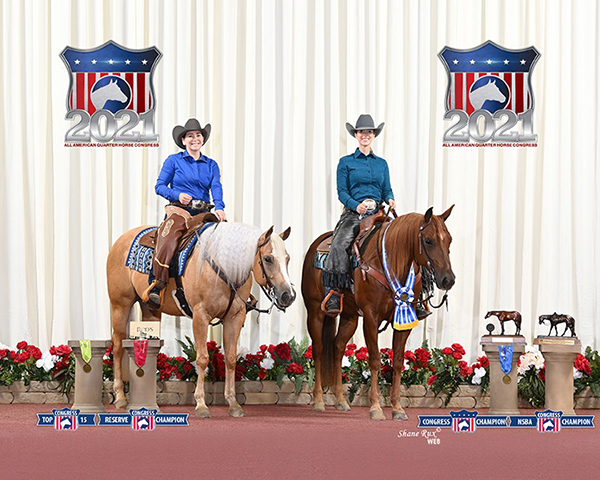 Michelle had competed at the Congress multiple times before. She has a background in all-around, Hunter Under Saddle, Reining, and Ranch Riding, and has two Reserve Championships to her credit. But this was Caitlin’s first Congress, and AQHA show for that matter.

“I rode All Chics Shine, aka ‘Quinn,’ a 5-year-old Palomino mare who is known for her sweet cuddles and napping. I bought Quinn in the spring of 2020 as my first Reining horse. We had success at the local Michigan Reining shows, but wanted to try out Ranch Riding at the Congress as well,” Caitlin says.

“Michelle showed Smart as Sue, aka ‘Reba,’ a 9-year-old chestnut mare who’s a typical red mare. She doesn’t care to be cuddled, but is a work horse and will give 110% of what you ask of her. Michelle has had a lot of success with Reba in Reining and was top 10 in the nation for Novice Horse Non-Pro Level 1 in 2020.”

The day of their class at the Congress was a whirlwind. Caitlin headed down to the coliseum warm up pen early, because she was in the first class- Level 1 Jr Ranch Riding. After her first class, she started warming up for Amateur Ranch Riding L1 and noticed that Michelle wasn’t there yet.

“I was getting worried as she was right behind me in the draw. We were draws 6 and 7,” Caitlin says. “Finally, only about five minutes before we were on pattern, she arrived to the makeup pen and checked in at the last second. Ranch was going way faster than Reining, which we were both used to. So Michelle only got about three minutes to jog her horse in a few circles and then was on pattern. I had finished my pattern, but stopped in the chute, turned around, and was able to cheer for her and watch her rock it!” 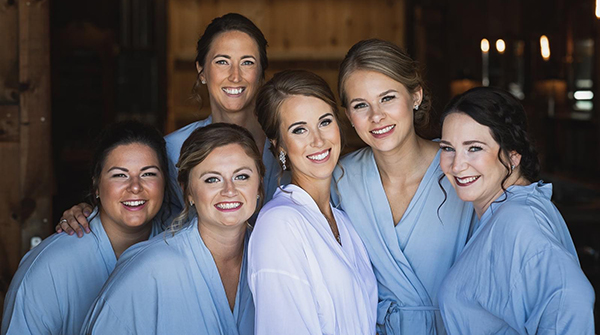 Amazingly, both ladies achieved firsts that day. Michelle and Smart As Sue were named the unanimous Congress and NSBA Champions in Level 1 Amateur Ranch Riding and Caitlin and All Chics Shine were the Reserve Congress Champions.

“The moment of us standing in the center for the placings was amazing,” Caitlin says. “When we both realized we would be top 10, we turned to each other and were so excited! Then, the names just kept being read and we all of a sudden thought, ‘Wow! We’re top 5!’ Then, when the last three were standing was when we both realized just how cool it was to be top 3 at the Congress! When third place was read, we both just gasped and grabbed for each other’s hands. It was the coolest feeling.”

“I was SO happy for her when I was called out as Reserve. She worked very hard for that class, and I was so glad it was her in that position. We have been with each other for some other major wins, but never in the same class. I was on the rail cheering for her when she won the AQHA Cup Rider title at the IHSA National Championship in Lexington, KY, and she was the first person to rush into the arena to give me a hug when I had won my third consecutive National Championship in the Alumni Reining at the IHSA Nationals.”

We’re sure that both ladies would agree that horse friends are the best friends.

If you have a great story to share with The Equine Chronicle, email B.Bevis@EquineChronicle.com.