Author of “They Rode Good Horses,” Don Hedgpeth, Has Passed 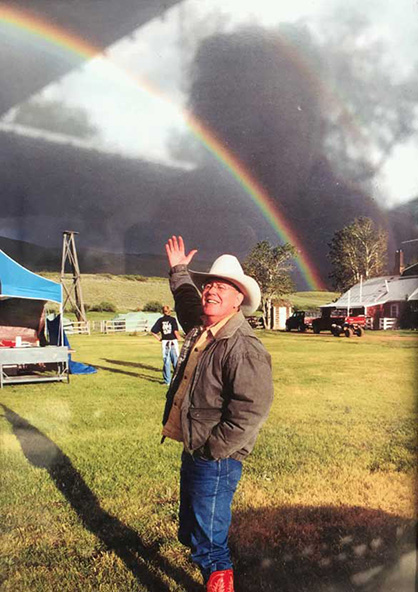 Don Hedgpeth of Medina, Texas, who in 1990 wrote AQHA’s 50-year history “They Rode Good Horses,” passed away on June 25, at Methodist Hospital in San Antonio after a 30-year battle with leukemia. Don was a beloved husband, father and friend, as well as an award-winning writer and expert on cowboys and western heritage.

Don was born on October 1, 1942, in Seagraves, Texas, to V.W. and Marion Hedgpeth. Don was the first child born of V.W. and Marion, who met while riding motorcycles in West Texas. He was raised mostly in the oil fields of South Texas where his family lived primarily in “camp” houses near wherever his father’s work took them. Don’s first job was in fourth grade working as a carhop for 50 cents an hour (plus tips) at Weber’s Root Beer Stand in Corpus Christi, which was owned by his grandfather and an uncle. During grades 8-10, he held summer jobs that included driving a grain truck, working in a cotton gin and hauling watermelons to towns and cities throughout Texas. In grades 11 and 12, Don worked with his dad at the gas plant as a roustabout digging ditches and working the rigs.

Don graduated from Banquete High School as salutatorian in May 1960 and enrolled at the University of Texas at Austin that fall. He completed his Bachelor of Science in education at Texas A&I in Kingsville in May 1965, and later his master’s degree at Southwest Texas State University in San Marcos.

Don first met Frances (“Sug”) at a South Texas dance hall where George Jones was performing, and their first date was in Corpus Christi to see the movie “Hud.” On November 25, 1964, the lifelong best friends and soulmates married in Corpus Christi. A job teaching history at Tivy High School brought the couple to Kerrville, a city that would bring them many friends and fond memories, serving as their home base throughout the years.

The first writing Don sold was a 1966 article on South Texas brushpoppers for which he received a check for $35. Don went on to become the editor of Oklahoma Cowman magazine, then the editor of Persimmon Hill and assistant director at the National Cowboy & Western Heritage Museum. He later became director at the Buffalo Bill Historical Center and Whitney Gallery of Western Art in Cody, Wyoming, in 1971. The family returned to Texas in 1976 when he has named the director of the Museum of the Southwest, then as the founding director of the Haley Memorial Library in Midland.

Don’s first book, “Spurs Were a-Jinglin,” was published in 1975. Don went on to author 21 books, including “The Texas Breed,” an anthology about Texas cowboys and cattlemen; “They Rode Good Horses,” the 50-year history of the American Quarter Horse Association; and several biographies about artists Joe Beeler, Robert Lougheed and Grant Speed. Both the Beeler and Lougheed books won Western Heritage Awards.

Don had a deep and comprehensive understanding and appreciation of the world of western and cowboy art and culture. Along the way, he also accumulated a wide network of friends, traders and artists who shared his passion. Many became as close as family.

Don was preceded in death by his mother and father, Marion and V.W. Hedgpeth, his twin sister Nancy Kay, and his grandparents. Don is survived by his wife of 55 years, Sug, his siblings Wilma Grupe (Otis) of Blunzer, Vicki Pollard of Corpus Christi, Skip (Kerry) of Midland, and Lisa (Jim) Teltschik of San Antonio; sons Cody (Cassandra) of Houston and Clint (Julia) of San Antonio; five grandchildren, Jake, Cole, Gracie, Claire and Clayton; and numerous nieces and nephews.

Don will be buried in the Bandera Cemetery, with a celebration of his life later in the fall.

Memorials can be given to The START Center for Cancer Care in San Antonio. Don’s wife and sons wish to extend sincere thanks to Dr. Joseph Holahan, Don’s longtime hematologist in San Antonio, and the nurses and doctors of Methodist Hospital.

All arrangements are entrusted to Grimes Funeral Chapels of Kerrville; the family invites you to send condolences at www.grimesfuneralchapels.com by selecting the “Send Condolences” link.