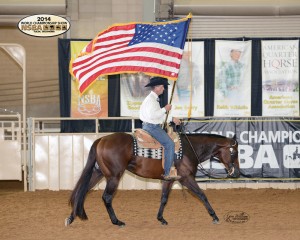 Ties weren’t uncommon at this year’s event. Nancy Sue Ryan, riding Jesse James for Courtney Battison, and Beth Case, riding Not Just Anyhoo for Rebecca Kazakevicius, tied for the win in the BCF Two Year-Old Open Hunter Under Saddle. Not Just Anyhoo also earned a NSBA World Championship title in the Two Year-Old Open Hunter Under Saddle later in the week with Case in the irons. In the BCF Three Year-Old Limited Non-Pro Western Pleasure, Eric Mendrysa and First N Line tied with Lauren Love and Wearin Only Moonlite to share the win. The BCF Two Year-Old Non-Pro Hunter Under Saddle, Limited Division, saw a tie between Sharnai Thompson and It Had To Be Hoo and Jamie West with VS Highroller, coincidentally both horses are by the stallion Hot Ones Only.

One of the unique portions of the NSBA World Show and Breeders Championship Futurity was the Performance Halter Get of Sire class, where groups of three offspring represented their sires in the halter pen. The get of RL Best Of Sudden brought home the inaugural championship, thanks to KM Boalicious, All The Sudden, and Suddenly Its Time. Rounding out the top three were the get of Invitation Only and Lazy Loper.

Another high point during the week didn’t include flashy clothing or big name riders. Instead it celebrated some true horsemen and horsewomen with the Equestrians With Disabilities classes. One winner was Jesse James Jasso, who won the EWD Walk-Trot Trail Supported Rider class aboard Zips Dandy Sensation, owned by Claire Cherrington. Exhibitors and horse owners can help the EWD program grow by participating in the Sponsor A Rider Program as part of the NSBA Foundation. Sponsorships can include paying for stall charges, assisting with entry fees, gas, or other expenses.

Following the excitement of the NSBA World Show, the Reichert Celebration took over Fort Worth, Texas for 18 days of all-breed competition ranging from Appaloosas and Quarter Horses to Paints, Arabians, and Ponies of the Americas.

On par with the exciting atmosphere of the Celebration, the big futurity classes drew the largest crowds. Tim and Cindy Snapp’s Scenery won the Open division of The Equine Chronicle Color Classic 2 Year-Old Western Pleasure with Carly Veldman-Parks in the saddle, who bested her reserve placement in last year’s class. “I just wanted to do her justice,” Veldman-Parks says. “I didn’t want to mess it up, because she’s so awesome. [My husband] Wade has ridden both her grandmother and mother and loved them.”

If “Gingersnap” looks familiar, that might be because she is the fourth generation in a line that has been bred and raised by the Snapp family. The beautiful mare by A Scenic Impulse is out of Miss Hottie and is the granddaughter of Zipmiss.

Veldman-Parks and Gingersnap later ended up second behind RJ King and Got Good Sensations in the Limited division of the class. King was presented with a check for $2,374.40, a Reichert Celebration belt buckle, Reichert medallion, Equine Chronicle gift bag, ribbon neck wreath, and a golf cart. His partner for the class was “Willow,” a mare by Zippos Sensation and out of Good Miss Winnie, who also produced a prior Color Classic contender that was shown by Sara Simons a few years back named Miss Texas Sensation. The colorful mare is owned by Ali Eidson, who has plans to show her at the upcoming APHA World Championship Show in November. “She is pretty easygoing, and she doesn’t really require a whole lot of time,” King says of his mount. “She pretty much knows her job.”

In the regular AQHA classes, Shane Dowdy and Chasing A Dream won the Maturity Open Western Pleasure for Candace Jussen. Allison Clark with B Endless Legs came in first for owner Cathrin Gutmann in the 3 Year-Old Open Hunter Under Saddle on the last day of the all-breed competition. In the pattern classes, Justin Wheeler and Indefinitely Flashy won the 3 and 4 Year-Old Signature Trail class for owner Linda Eppes and Stephanie Black of Seven Bar Quarter Horses. Sadie Amore Deflippo and Duies Creditor won the Signature Non-Pro Trail. So So Good won the 6 Year-Old and Older Trail class with trainer Becky George.