ApHC Nationals Moving to Indianapolis in 2021 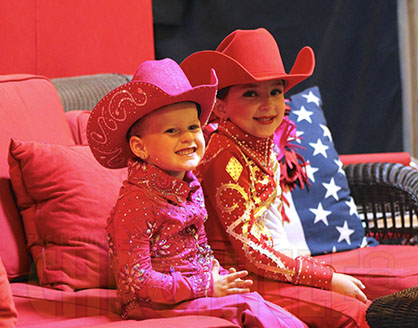 MOSCOW, Idaho – For the first time since 1992, when it was held in Columbus, Ohio, the National Appaloosa Horse Show & Youth World Championship is coming back to the Midwest. The Appaloosa Horse Club (ApHC) and the Indiana State Fair Commission have signed a 3-year agreement to hold one of America’s oldest and most prestigious horse shows in Indianapolis, beginning in 2021.

The show dates for each year will be July 5-17, following completion of NASCAR’s Brickyard 400 auto race at the Indianapolis Motor Speedway. In 2022, the National Show will celebrate its 75th Anniversary in Indianapolis.

“We are very excited about our new partnership with the Indiana State Fair Commission,” said ApHC President Ken Johnson. “The Indiana State Fairgrounds & Event Center is a first-class facility, and Indianapolis is a thriving, modern and centrally-located city. It’s the perfect place to host one of America’s great horse shows, which is expected to draw thousands of participants from coast-to-coast.”

The National Appaloosa Horse Show began in 1948 and was first held in Lewiston, Idaho. Over the years, it has moved to various venues across the country. This year, the National Appaloosa Horse Show & Youth World Championship will conclude a successful 8-year-run in Fort Worth, before moving to Indianapolis in 2021. Last year, the show drew participants from 40 states, in addition to Canada, Mexico, Germany, Italy and the Netherlands.

“Our team first started knocking on the door of this high profile, national show in the summer of 2018,” said Indiana State Fair Commission Executive Director Cindy Hoye. “Ultimately, our modern facilities, customer-centered staff and rich history of presenting iconic, national events, made us an ideal venue for hosting this show. We’re thrilled to welcome the Appaloosa Horse Club to Indianapolis and know that it will add a new, exciting element to the more than 400 events offered at the Fairgrounds.”

“I want to thank Commission officials and the ApHC Board of Directors for their tireless efforts to bring this great horse show to Indiana for the first time since 1988,” Johnson added. “Most importantly, we were able to secure dates which avoid a direct conflict with NASCAR’s popular Brickyard 400. This ensures that our members will be able to find affordable and convenient hotel accommodations during the entire run of the show.”

The Appaloosa Horse Club (ApHC) was established in 1938 with a mission of preserving, promoting and enhancing the Appaloosa breed. The ApHC has since registered nearly 700,000 Appaloosas, which are known for their distinctive color, intelligence and even temperament. True to their reputation as an extremely versatile breed, Appaloosas can be found in nearly every discipline including show, racing, and endurance riding, as well as serving as reliable family horses. The international breed registry is headquartered in Moscow, Idaho, the heart of the Palouse region—the Appaloosa breed’s namesake and point of origin.