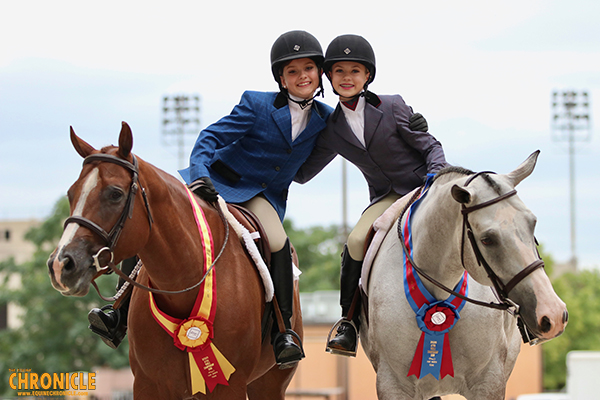 Today’s classes at the APHA Youth World Show have been dedicated to the English genre with Over Fences, Equitation, and Hunter Under Saddle on the menu. 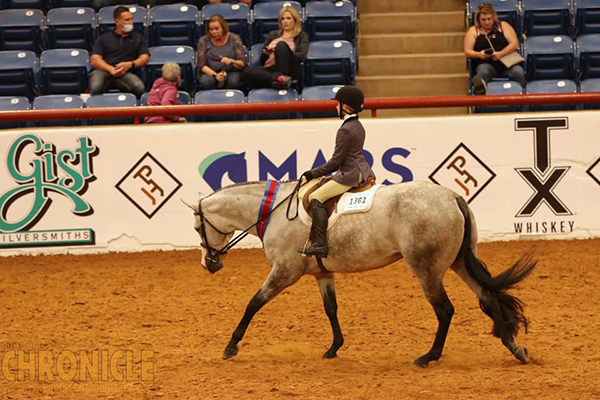 12-year-old Peytyn and her 5-year-old mare “Taya” have placed in the Top Ten in every class they’ve showed in here at the Youth World. That’s quite an impressive feat considering that they’ve just been a team for one year under the guidance of Chad and Shane Christensen. But of all the classes they compete in together, Hunter Under Saddle is Peytyn’s favorite.

“She’s a pretty mover, and she keeps her head down very easily,” Peytyn says. “I thought my ride was great, and she was very consistent. We stayed off the rail, but not too close to the judges. Chad and Shane told me to tighten my reins, look up, and smile.” 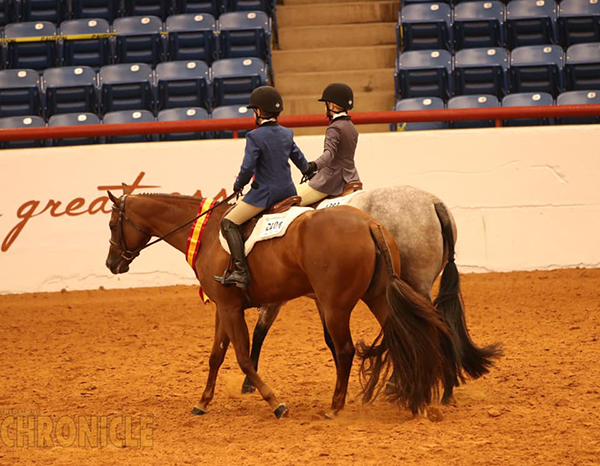 Peytyn’s barnmate and best friend, Lexi, rode her horse, also named “Lexi,” to a Reserve finish. 12-year-old Lexi and 7-year-old Lexi have only been showing together for two months. This is their third horse show as a team.

“She’s very floaty and, at the trot, she’s very easy to ride,” Lexi says. “Peytyn is one of my best friends. We were planning it! We just thought it would be very cool if it happened. I was very happy for her because she won the World Championship.” 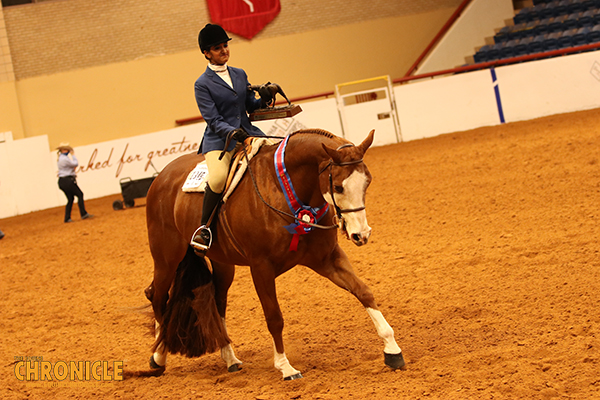 Then, it was Sriya’s turn to take a win in 13 and Under Equitation with Just Say Whoa. Reserve was Cara Christensen with Its All Bhindthe Zipr. Third was Peytyn Goodin with Platinum Cowgirl. Fourth was Madelynne Alden with Clearly Contagious. Fifth was Blair Rozas with Amississippisensation. 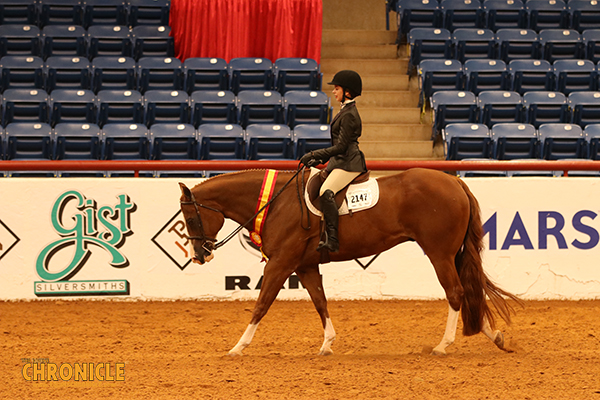 Winning Novice Youth 14-18 Hunter Under Saddle was Siena Holyoak with Candy Confidential. Reserve was Lindsey Watland with This Sheik Rocks. Third was Anna Thron with R Zipalicious. Fourth was Sydney Replogle with All That And More. Fifth was Ellie Rae Krock with All Ways Lazy. Siena also won 18 and Under Hunter Under Saddle with Candy Confidential. Reserve was Amy Lamberth with Johnny Zipper. Third was Rebecca Figueroa with Check Required. Fourth was Lucy Lewis with Im Axle Rose. Fifth was Ella Storch with Especially Lazy. 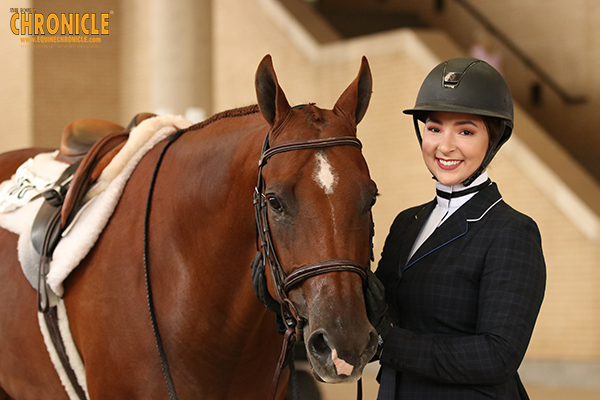 Rebecca Figueroa had an exceptional Youth World Show, which was actually supposed to be her last. However, thanks to APHA’s new policy allowing youth to extend their eligibility one year due to the COVID-19 pandemic, she will compete next year as a youth as well. In addition to winning 18 and Under Showmanship and Horsemanship, this pair claimed a Reserve title in Performance Halter, Reserve in Equitation, third in Hunter Under Saddle, and third in Western Pleasure.

While Showmanship is one of Rebecca’s favorite classes, it’s certainly not one of “Bob’s.” “When he learned Showmanship, it was one of the last things we did with him, and he was very tough to teach. We’ve finally gotten to the point where it’s much easier, and he’s enjoying it much more. I think our plan for this pattern was to keep his mood happy. We ran through the different parts and made sure he was leading well, because that’s one of our challenges. Also, we ran a lot, because there was a lot of running in the pattern.”

“I love Showmanship, because it takes a lot of trust with your horse, and it really shows off your athleticism and your horse’s athleticism, as well as your connection with them. Also, because this is a harder class for Bob, it was a very rewarding success.”

For Horsemanship, Rebecca planned to show off Bob’s ability to rate at different speeds within a small area. “We had a fast line down the center, and I enjoyed that because he really moved forward, but was still honest through it and into the extension. It was a short distance, but it was fun to show off our ability to still have pace and then control around the corner.”