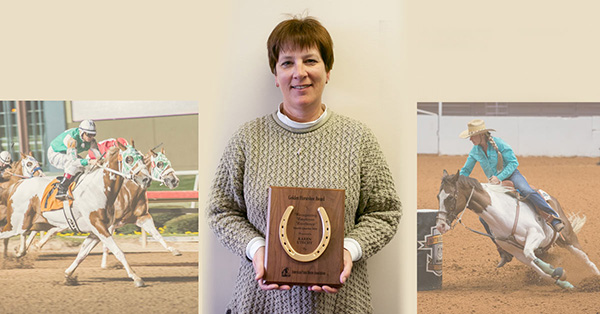 APHA is saddened to report that Karen Utecht, the association’s longtime director of racing, passed away January 4 after a lengthy battle with cancer.

A pillar of the APHA staff and Paint racing community, Karen’s APHA journey began in January 1996 in the Registration/Processing Department. She eventually moved to the Performance Department as racing coordinator and was later promoted to director of racing in 2003.

APHA Executive Director Billy Smith reflects on Karen’s dedication and contributions over the past 25 years.

Karen wore many hats and was always willing to help wherever needed. Members might also remember Karen from the APHA World Show, where she served as stall office manager for many years.

Prior to coming to APHA, Karen worked for Speedhorse magazine and continued to work horse sales on weekends at Heritage Place after coming to the association.

In honor of her dedication to Paint racing, the APHA Racing Committee awarded Karen with the Paul Harber Distinguished Service Award in December 2020.

She was well-loved by APHA staff and members, and will be remembered as a feisty and kind soul whose contributions to APHA will live on in the relationships she formed and the programs she fostered.