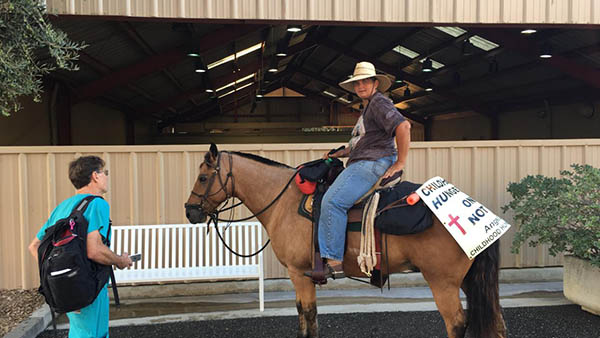 Six years ago, Star-Buck was near death. Emaciated and weighing only 400 pounds, he was rescued by Angela Wood and friends. Now, the 10-year-old American Quarter Horse gelding is strong enough to walk across the country with Wood to raise awareness for childhood hunger.

In Wood’s years as an over-the-road truck driver, she saw more childhood hunger throughout America than she cares to remember. Having gone through Star-Buck’s rescue and nursing him back to health from the brink of starvation, she thought of a way to combine those stories into an awareness-raising event.

“Star-Buck is the perfect poster child for hunger,” said Wood, explaining the origin of her campaign. “He knows hunger as well as anyone.”

So in the summer of 2018, Wood set out from her home in Kentucky for a cross country journey with Star-Buck and Renegade, 15-year-old American Paint Horse. The horses pulled a covered wagon that became Wood’s home for more than a year.

“I slept in that wagon almost every night,” said Wood. “I’d pull into families’ farms and ranches – the hospitality has been truly amazing.”

Wood and the horses headed east for the North Carolina coast. Once there, they turned around and officially started their coast-to-coast journey to California. All was well for 13 months and more than 4,000 miles until Renegade suffered an injury in Nevada. Wood decided to leave the wagon with supporters and finish the journey riding Star-Buck.

As she approached the Sacramento area, her supporters contacted the UC Davis School of Veterinary Medicine to inquire about a place for Star-Buck to bunk for the night. The school offered a stall in the barns of its veterinary hospital, and looked forward to Star-Buck’s arrival.

When they arrived at UC Davis, Star-Buck was showing slight signs of lameness. Dr. Larry Galuppo, chief of the Equine Surgery and Lameness Service, and a team of residents, technicians, and students examined Star-Buck to make sure he was healthy enough to complete the final portion of the journey to the coast.

Thankfully, Star-Buck’s injuries were slight – just a bit sore from the saddle. So the team worked with Wood to help her adjust the saddle to not affect the minor sores Star-Buck was developing on his sides. After two days of rest at the veterinary hospital for Star-Buck, he and Wood were back on the road for the final seven days to the Pacific Ocean.