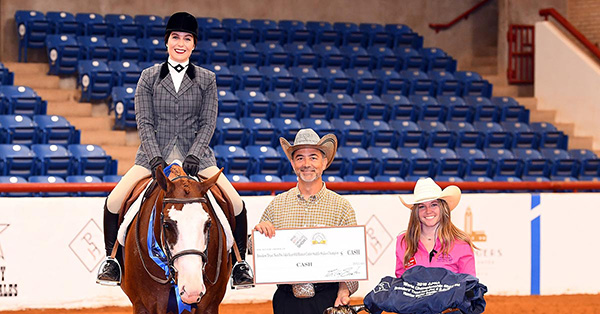 All Ways Lazy has kind of become known for epic comeback stories, and 2019 was no exception. Returning to the World Show two years after his inaugural Breeders’ Trust Stakes win, “UConn” was back and better than ever; he captured the championship title and $4,446 in the 2019 Breeders’ Trust Non-Pro 3- & 4-Year-Old Hunter Under Saddle Stakes with Emily Fick, keeping his winning streak “all in the family.”

Bred and owned by Lyn Fick of West Grove, Pennsylvania, the 2015 sorrel overo gelding by Lopin Lazy and out of Its All Fancy won the 2017 Breeders’ Trust 2-Year-Old Hunter Under Saddle Stakes with trainer Erin Fick, Lyn’s daughter, in the irons. Just weeks before that class, UConn became cast in his stall and sustained a serious injury to his right fetlock that left his connections unsure of whether or not he’d be well enough to show. But the tenacious gelding rallied, recovering quicker than expected and capturing the first major win of his career.

After the cheers faded, however, tragedy struck once again—a debilitating vaccine reaction sidelined UConn, and he spent most of 2018 on the road to recovery. Healthy once again, the Fick family decided to go all in one more time. The only non-pro in the family, Emily took the reins that were so carefully prepared by Erin and Lyn, took a deep breath, and trotted down the center of the John Justin Arena on September 19.

“He’s very different from my horse—he’s very free spirited, a very happy horse and he loves showing. As long as you relax, he relaxes and you’re good to go. It makes your job so much easier and it makes me less nervous—I’m usually a nervous Nellie,” Emily said; this marked her first APHA World Show as an Amateur exhibitor, and her first time back to the big show since 2011. “I looked at my sister and she did the ‘breathe’ motion, and I sat down and rode. He warmed up great, and I felt more confident than I ever have going into the pen.”

With a floating trot and a sweeping canter, UConn didn’t miss a beat—and you’d never have guessed he’d been out of the show pen for nearly two years. Being called as the stakes class champion was even sweeter for Emily knowing that it represented a true family effort and years of hard work that turned a dream into reality.

“It’s so crazy to think my mom bred and raised him, my sister trains him and I got to be a part of it,” she said. “He’s such a cool horse, and I’ve known him since he was a baby. It’s definitely tugs on your heartstrings when this kind of thing happens.”

The 2019 Breeders’ Trust Stakes classes feature the richest payouts in the program’s history, with $85,000 paid out across four classes. The Non-Pro 3- & 4-Year-Old Hunter Under Saddle Stakes class paid out more than $7,200 this year.