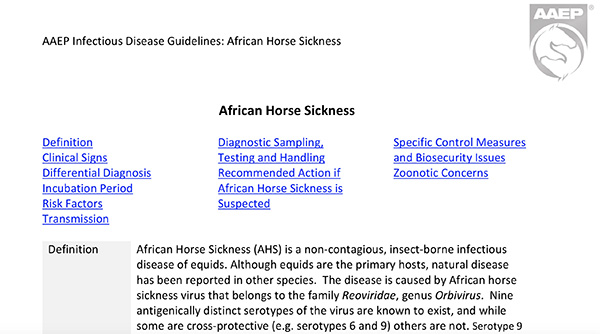 The American Association of Equine Practitioners (AAEP) has published on its website comprehensive guidelines to assist practitioners and regulatory agencies with identification, diagnosis and control of African horse sickness (AHS), an internationally reportable disease of equids that is highly fatal.

Although AHS does not occur in horses in the United States, a current outbreak in Thailand, with a 94% mortality rate, illustrates the devastation possible when the disease affects a naive horse population.

“The potential risk of introducing endemic or transboundary diseases into the country’s equine population cannot be over emphasized, either at the level of the practicing veterinarian or the horse-owning public,” said Peter Timoney, MVB, MS, Ph.D., FRCVS. “Failure to suspect the occurrence of such a disease could have major consequences, especially when dealing with a contagious disease or a vector borne disease like African horse sickness.”

AHS is a non-contagious, insect-borne infectious disease of equids. AHS is a highly important OIE-listed equine disease and a transboundary disease in the U.S. As such, any suspicion of AHS is immediately reportable to the United States Department of Agriculture (USDA) and State Animal Health Officials in all 50 states and territories.

“We must remain vigilant through the USDA’s strict testing of horses at points of entry into the U.S. and expand awareness among equine practitioners to prevent the potential detrimental effects of AHS and other endemic or transboundary diseases,” added Timoney. “The risk applies not only to horses but also to other equid species, specifically zebra, that are sought after for zoos and privately owned wildlife or safari parks.”

The African Horse Sickness Guidelines, available as a PDF file, were authored for the AAEP’s Infectious Disease Committee by Dr. Timoney, the Frederick Van Lennep Chair in Equine Veterinary Science at the University of Kentucky’s Gluck Equine Research Center. The guidelines were edited and reviewed by Abby Sage, VMD, DACVIM, along with the AAEP Infectious Disease Committee.

View the African Horse Sickness Guidelines or save them to your mobile device. In addition to African horse sickness, AAEP guidelines for 20 other equine infectious diseases are available on the AAEP website. A Fact Sheet for horse owners on African horse sickness may also be found on the Equine Disease Communication Center website.

The American Association of Equine Practitioners, headquartered in Lexington, Ky., was founded in 1954 as a non-profit organization dedicated to the health and welfare of the horse. Currently, AAEP reaches more than 5 million horse owners through its over 9,000 members worldwide and is actively involved in ethics issues, practice management, research and continuing education in the equine veterinary profession and horse industry.