A Passion Knowing No Bounds 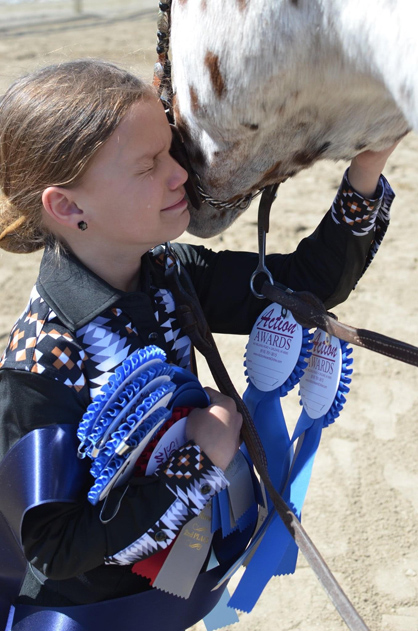 This sweet moment between eight-year-old Ellenor Kavanaugh and her 5-year-old POA, Santee Carlos, is much more than it appears.

“Everyone suffers with something, and we thought people would connect to this image as comfort for their own struggles,” says Louise Kavanaugh.

Horse riding has always been special for Ellenor, explains Louise, because she actually uses it as a 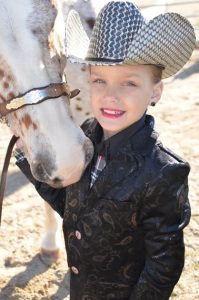 physical therapy and a temporary escape for her chronic illness, Cystic Fibrosis. “These animals can bring so much joy and comfort to our lives,” Louise explains.

Louise herself grew up showing AQHA, and it was her dream to share her passion with her children. When Ellenor was born, however, she had emergency surgery on her intestines at University of Michigan, spending three months in the NICU and an additional month in the children’s unit.  The diagnosis of Cystic Fibrosis stunned them.

“Cystic Fibrosis is a life-shortening, progressive chronic illness that causes thick sticky mucus to build up on internal organs like the lungs, pancreas, liver, and intestines. Ellenor has one of the more aggressive forms, her CF affects all of the organs listed. With a diagnosis like that, right at birth, my motherly instinct was to keep her wrapped in bubble wrap and never leave the house. We sold everything horse related, even my two childhood show Quarter Horses. I was convinced that the dream of sharing horses with my daughter, that I once had, would never happen,” Louise says. 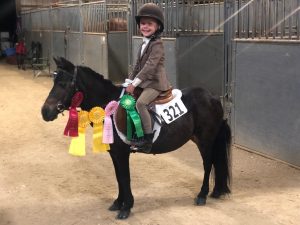 “But that was never the person Ellenor was,” continues Louise.  “She has always had a clear focus for God which seems to eclipse her fear.  Ellenor quickly showed us that you can have passion for something despite having an illness. From a very young age she was charismatic, adventurous and had this deep-rooted passion for horses. She would dig to the bottom of every toy bin and find a pony or look through a book until she found pictures of horses.” 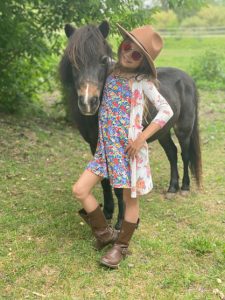 Then when Ellenor turned two, her dad, a firefighter at that time, had a friend who brought her a life-sized stuffed animal pony that she could sit on and do her physical therapy treatments (a vest, she does twice a day, that shakes her chest cavity and breaks up that thick sticky mucus that builds up on her lungs and causes lung infections and eventually loss of lung function). She would sit on the pony for hours as it shook her like a real pony and she would pretend to ride. 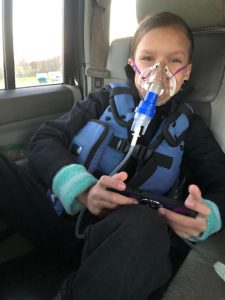 That was the turning point for the family, and they bought Ellenor her first “love,” a miniature pony named Mini Cooper. “We thought maybe this would be a phase that she could look back on pictures and tell her, “we tried the pony thing, you weren’t that interested.” It turned out she was interested, very very interested, obsessed,” Louise says. “Mini Cooper was a typical sassy pony mare, and they did everything together, and she taught Ellenor to be quite the hand. By the time Ellenor was 4, she was cantering and jumping that little mare all over the place. She took her to open shows where they always held their own. Every time she was able to ride it sparked a light inside her that would stay with her the rest of the day.” 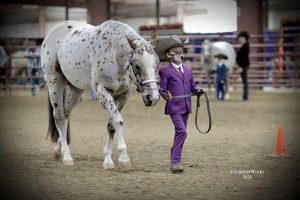 Ellenor’s parents then purchased a 2-year-old POA, Santee Carlos, from Susan Wells out of Oklahoma. They called him “Mellow” because of his calm demeanor.

“Mellow, like Ellenor, has a unique medical feature to him,” says Louise.” When Mellow was born he fractured his atlas vertebrae, which causes him to have the cutest little tilt to his head. It doesn’t bother him, and it’s only noticeable when he’s relaxed or curiously inspecting something. But it is little a constant reminder that  even with our flaws and setbacks in life we can still accomplish great things. It’s been a project for Ellenor and I to break him out together. She also has a little hunter jumper pony, owned by Tom and Kristy Green, that she jumps at hunter shows and trail rides. 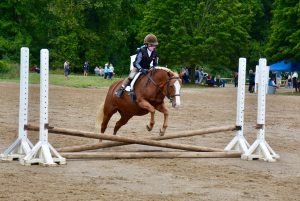 Though most Cystic Fibrosis patients need to be kept away from germs and have trouble with too much physical activity, Ellenor’s family found Emily Schaller, a CF patient herself and founder of a non-profit called the Rock CF Foundation. “Emily and her foundation promote a healthy and active lifestyle with CF. After research, doctors today also encourage an active lifestyle,” says Louise.

“The more time Ellenor spent riding the more her doctors at the University of Michigan were noticing she was quickly becoming one of their healthiest young patients with her particular CF Mutation. Her team of doctors are very supportive. Riding provides not only the physical exercise needed to work out her lungs on a daily basis but also the physical therapy that helps to break up any mucus that builds up and settles on her lungs. The mucus collects bacteria and causes lung infections, when Ellenor rides the movement from the horse breaks up that mucus so her body can move it out before infection can set in.” 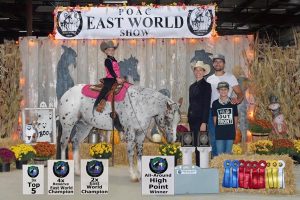 Louise explains that Ellenor won the All Around Highpoint in the 6 & Under Leadline at the POA East World Show for two consecutive years: 2020 and 2021. This is Ellenor’s First year competing in the Walk-Trot All Around with Mellow, and she seems to be drawn to patterns as she is a young person who likes a challenge, outfitted in her Ranch Dress’n attire that suits her style.

“Ellenor’s firm foundation in faith has allowed her to have the confidence to focus on her passions, despite what worldly views would tell her. We can’t keep teaching people who are sick that they need to be healthy before they can live their lives, Ellenor is never going to be “healthy”; she’s always going to be “sick.”  That’s why that original picture was so special to us, it’s a reminder that she is sick but lives a life that she is so thankful for.

Ellenor’s words perhaps express it best, as tears of appreciation filled her eyes at the end of the show.  She says, “I’m just so thankful for him being a good boy.” 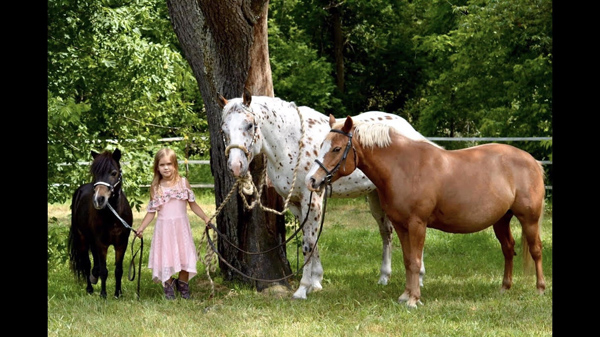