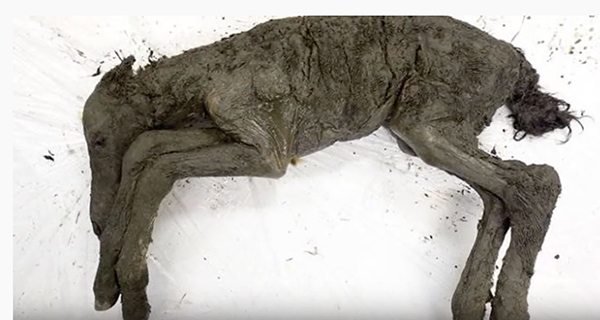 Global warming is revealing secrets that have been hidden in the permafrost for many thousands of years. In August 2018, researchers found the frozen carcass of a foal of a now extinct species of horse in the Yakutsk region of north eastern Russia.

Believed to be only a few weeks old when it died, the colt foal is so well preserved that even its mane and tail are intact. It is thought that it drowned in soft mud that then became part of the permafrost.

The foal is thought to have lived over 40,000 years ago in the Upper Paleolithic (Late Stone Age), and was found in the Batagaika crater in Yakutia, the coldest region in Russia.

The North-Eastern Federal University (NEFA) in Yakutsk recently hosted a paleontological seminar, attended by NEFA Scientists as well as specialists from the Yakutsk Research Institute of Agriculture, and the Korean Sooam Biotech Research Foundation to discuss the study of the ancient foal.

Computed tomography of the foal carcass was used to examine the internal structure and create a 3D model of the body. Sergey Vasilev, head of the Center for 3-D Modelling and Virtual Reality of NEFU Institute of Physics and Technologies, noted that this allows them to create a complete picture of what the foal looked like.

Semyon Grigoriev, head of P.A. Lazarev Mammoth Museum of NEFU Institute of Applied Ecology of the North, added “In case of finding the remains of unique discoveries, we always try to organize their computed tomography, because with its help we can fix the current preservation after the moment of discovery without disturbing the integrity of tissues or organs”.

According to Lena Grigorieva, lead researcher at the International Center for Collective Use of Molecular Paleontology, the foal is unique in its state of preservation. Materials collected have been submitted for microbiological, histological and cellular studies.

“The study of materials will give a general idea of ​​the microflora of the ancient horse,” said Yan Ahremenko, an associate professor of the Department of Histology and Microbiology at NEFU Medical Institute. “Perhaps we will find lactic acid microorganisms and ancient bifidobacteria as in the case of the mammoth.”

The scientists hope to be able to find viable genetic material that could be used to attempt to clone the foal.

South Korean cloning expert Professor Hwang Woo Suk said, “If we manage to find a cell, then we will do our best to clone the unique animal.’