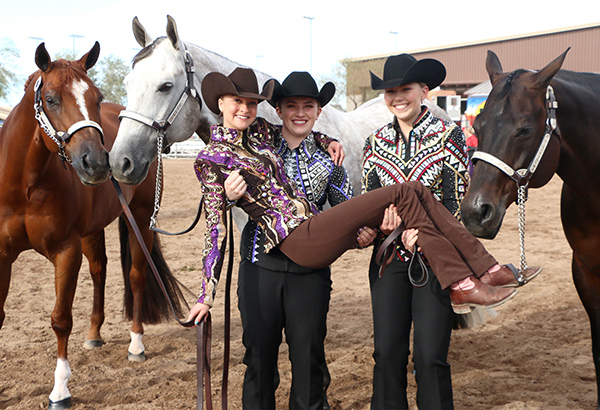 It was apparent from any vantage point that the 2020 Arizona Sun Circuit was even bigger than last year: more trailers, more stalls, more horses in the arenas. The nine-day equine extravaganza was held February 29th through March 8th at the expansive WestWorld facilities in Scottsdale Arizona. The show’s reputation for providing a tremendous diversity of classes, along with a superlative experience, continues to draw exhibitors of every level from all over the country, and the world. Sun Circuit concluded just before a cascade of horse show cancellations due to the coronavirus sweeping the nation.

Increases in class entries were seen across the board. There were 22,609 AQHA entries and 4,647 NSBA class entries, including NSBA Color Breed classes. NRHA and NRCHA classes also saw increases. Sun Circuit utilized every inch of the WestWorld show grounds. Ten arenas held classes and additional arenas were available for warm up. 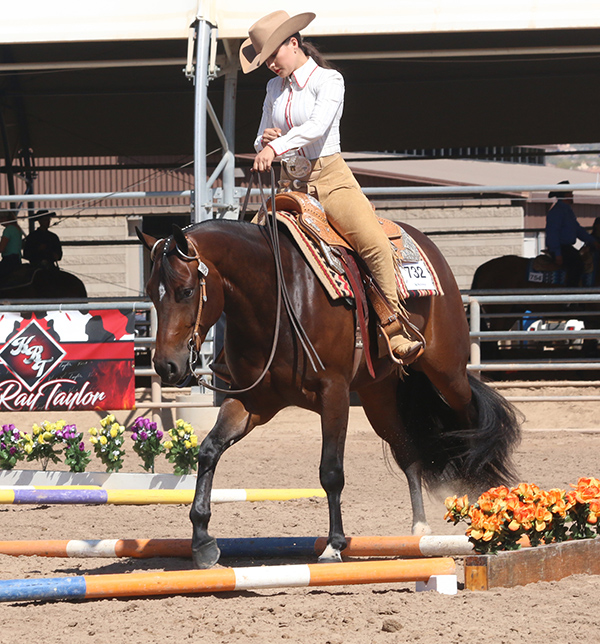 It seems fitting that the iconic western imagery of Arizona served as a backdrop for the burgeoning numbers of exhibitors in Ranch related classes. No silver draped saddles, no bling, and no fancy clothes were to be found in the ranch pens, but there were plenty of versatile, athletic, and phenomenal horses. The increases in Ranch entries required show management to distribute some classes to an additional arena. Ranch Riding classes saw 30, 40, and more entries across the divisions, including a staggering 57 horses in the Senior and 47 in Select.

Dozens of amateur and open Ranch Trail horses of all levels navigated naturalistic obstacles. There has been a noticeable surge of Select exhibitors in Ranch Trail with 23 teams dragging logs, opening gates, and crossing bridges. Though Arizona Quarter Horse Association’s Ranch on the Rail classes are non-AQHA, that did not dissuade exhibitors. This fan-favorite class saw 33 amateur entries and a sizable number of open and L1 riders as well. Ranch exhibitors had their own prize line up with High Point awards, Best of Show, and Circuit Awards. Carly Lueck and Smooth Cat Man won the Amateur Ranch High Point award of a Superior Saddlery Saddle. The Open Ranch High Point title and Superior Saddle went to Anne Macrea with Pretty Smart Guy, while the L1 Open Ranch High Point was picked up by Oraz Holdings’ Lil BevAt Bar. 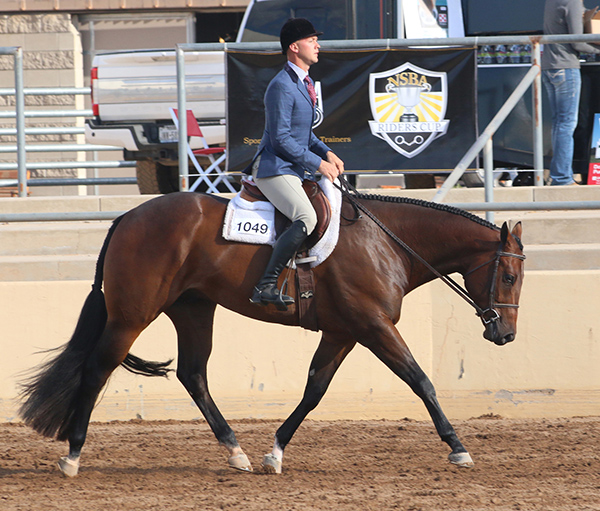 The show also offered a full slate of VRH classes, which drew more exhibitors than previous years. An all-breed VRH Open High Point Superior saddle was the award many exhibitors were aiming for. When the points were tallied, it was Kalahari Moonshine and Kathy Torres who came out on top.

Cow Horse exhibitors came out in droves in AQHA, Versatility, and NRCHA classes. Some of the best in the nation were showcased in the 10th Annual Smart Boons Fence Challenge with $20,000 in added money. Corey Cushing was the last to go on One Fine Vintage, owned by Bradley and Mary Roberts. It had been a night of spectacular runs and Corey knew he had to pull out all the stops for the win. The pair dominated their cow with ease and marked a 149 to win $6,375, the buckle, and an embroidered cooler. The total payout was $26,000 along with other great prizes.

The Farnam Golden Cowboy Champion was announced at the conclusion of the Smart Boons Challenge. The Golden Cowboy is an event in which one horse and rider have their scores combined from the Smart Boons, Herd Work, Muley Steer Stoping, and Wednesday’s Jr or Sr Cowhorse. Farnam donated $5,000 to the purse for the event along with a fabulous prize lineup that included a custom saddle from Superior Saddlery, a Preston Williams Hardware buckle, a cowhide chair, embroidered coolers, bronc halters, and more. Corey Cushing and One Fine Vintage had a composite score of 370.5 to secure the title of 2020 Golden Cowboy. 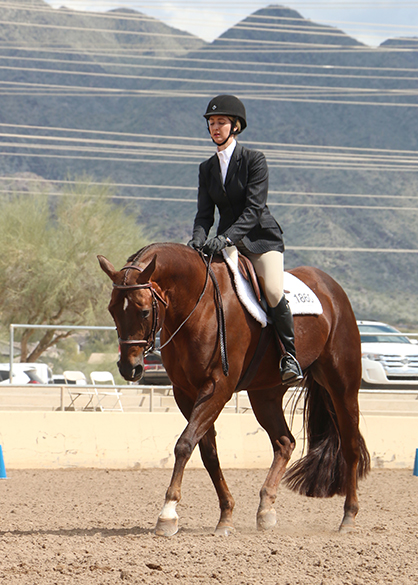 The $25,000 added ARHFA Sun Circuit Rope Horse Futurity event had an increase in entries as well. A limited rider division, with an additional $5,000 added to the pot, was also offered in the Futurity. This was the first year that the Maturity was added to its class list, and a Non-Pro event was held as well.  The total payout was over $108,000 this year. Shesa Royal Cat with Casey Hicks won the Futurity Heading and a check for $7,828. JD Yates rode Marlboro Cat for the Heeling win and $8,750. JD was back in the Maturity heading on BB Cooper. The pair took the top spot and $2,520. Hermanito Cat got Andy Holcomb to the right place on each run so the pair could win the Maturity Heeling and $3,160.

Rail and pattern class exhibitors found a lot to love at Sun Circuit. Level 1 classes gave newer folks the opportunity to participate in a top tier show, while Level 3 saw the many titans of the Quarter Horse world at their finest. Given its own covered arena for the duration of the show, Trail kept busy with AQHA and NSBA riders. Western Pleasure, Western Riding, and Horsemanship all had a great deal of participation in NSBA concurrent classes.

The NSBA held its Riders Cup at Sun Circuit again this year. The event awarded hefty checks and elegant, silver trophy cups. A total payout of $80,000 was distributed. On Tuesday evening, the highly entertaining and rather whacky Cowboy Ninja Warrior games were held. Seven 4-person teams were auctioned off to raise $13,560 for the NSBA Crisis Fund.

The National Championships in Horsemanship, Equitation, and Showmanship were decided at Sun Circuit after three  goes of tournament style competition reduced the field of nationally ranked amateur, select, and youth exhibitors down to just four in each division. The Four showed in head-to-head matchups that were both fun and exciting. All of the finalists received embroidered leather bomber jackets, and each champion won a gorgeous silver buckle. 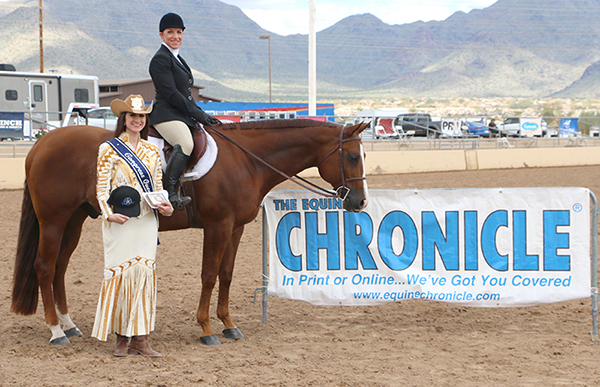 Adequan Showmanship National Championship saw Scott Reinartz and Investin A Good Bar progress through each round of the Select with one exceptional pattern after another and ultimately win the championship. Tony Anderman and Solo Invested arrived at Sun Circuit in the top position on the Amateur Showmanship Rankings list and made it all the way to the champion buckle. Grace Himes and Essentially Good ranked 3rd in the nation among youth and showed with exquisite form in each round right up to the finals to win the championship.

The Equine Chronicle was the title sponsor of the Equitation National Championship. Grace Himes and Essentially Good were back as one of The Four and prevailed to collect her second Championship. Carey Nowacek and Lethals Hot Weapon’s final two patterns earned whistles and shouts for its grace and precision and won her the Amateur Champion buckle. In the Select, Karen Lee Tegner-Manseth and Definately A First were crowned champions. 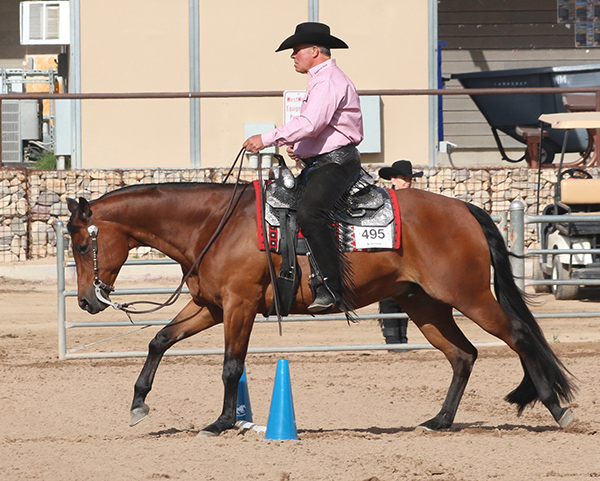 Fantastic awards are another reason people love Sun Circuit. Rod Patrick Boots were the Best of Show prizes that awaited youth, amateur and select exhibitors in both the all-around and ranch and cattle divisions. There were 33 saddle awards across disciplines, ages, and levels. Non Pros in L1, L2, and L3 accumulated points to win Bob’s Custom Saddles. They had their points tallied from Showmanship, Horsemanship, Western Pleasure, and halter. Megan Neugebauer riding DW Krymsun Advantage took top honors in the Level 1. Good N Plenty Gold was shown in Level 2 by Griffin Holliday to claim the saddle award. Youth rider, Isabella Buckley, won the Level 3 saddle with Roses Only. The Non-Pro English saddle was won by Laurel Champlin and Look N Hott. Amateur roper, Paul Bogart, riding Jacks Ichi Cat caught himself the High Point Roping Caliente Saddle. Garrett Hershberger showed mastery at Heading and Heeling to win the High Point Youth Roping award of a Caliente Saddle Shop saddle. A full list of award winners can be found at SunCircuit.com.

Sun Circuit strives to make the show fun and rewarding for everyone. The Prize Patrol was busy roaming the grounds with fun give-aways. After nine days of boot races, bouncy horse races, trot races, trivia, name that tune challenges and other games, over $60,000 worth of electronics, products, and gift certificates were distributed thanks to generous sponsors. Exhibitor parties hosted by the Johns family; AQHA stallions, Mechanic and The Mile High Club; and D Designs Show Clothing and Hot Ones Only; provided great food, entertainment, and social time for everyone.

With a welcoming environment, fantastic awards, great giveaways, and the opportunity to enjoy Scottsdale’s coveted sunshine, Arizona Sun Circuit was bursting at the seams with all the makings of a memorable horse show. Those memories will certainly be cherished as we all weather the challenges of taking care of our families and our horses in the coming months.