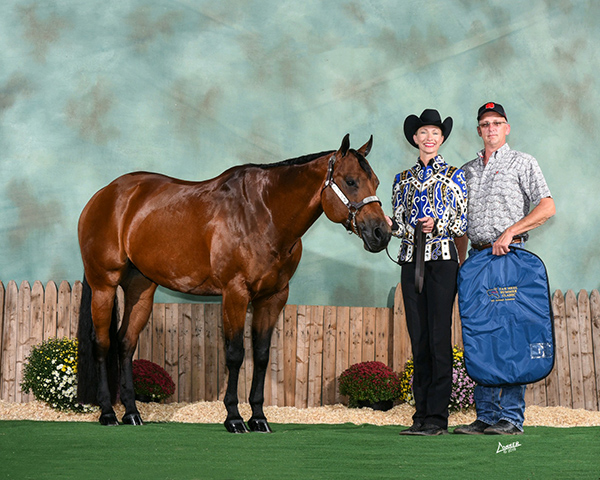 The title of AQHA Supreme Performance Champion is a prestigious one. A single horse and rider duo must earn six Superior titles in performance events, excluding Halter and Performance Halter. An Event Superior award is presented to a horse that earns 50 or more points in a single discipline.

So, 6 Performance based Superiors X 50 points each = 300 points. While that’s certainly a lot of points, the real skill in achieving the designation of Supreme Performance Champion comes because of the excellence that must be achieved across the board in a variety of very different disciplines. In fact, only 22 amateurs have earned this award. The most recent recipient is Beth Becker and her 13-year-old gelding, Only Promoting Me.

But Beth isn’t what some might picture as the typical weekend warrior, traveling cross country to horse shows every weekend, snagging up points along the way. Beth is an elementary school teacher and a do-it-yourself exhibitor.

As a self-professed horse crazy girl from a young age on her parents’ farm, Beth grew up with a love for horses. But keeping horses for competition purposes wasn’t exactly the way of the farm when there were crops to tend to and cattle, hogs, and sheep to raise. 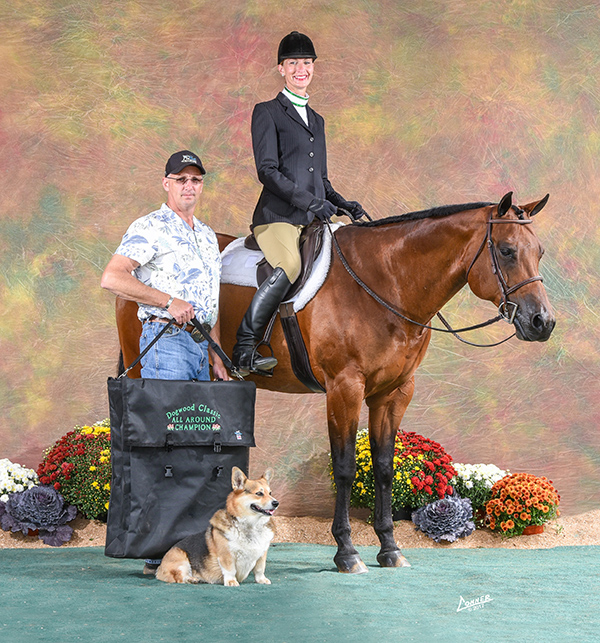 “My parents had purchased some old cattle horses to check on the cattle that they kept in their pastures; but, as with many farms, you only keep the animals that are necessary,” Beth says. “My parents eventually sold the horses except for one. That was my chance. I had to prove to my parents that I could assume total responsibility. Once I proved to my parents that I was serious about horses, the real work began.”

Beth raised hogs in order to earn the money to purchase her first horse, and it wasn’t until she was in sixth grade that her piggy bank was full enough. After showing in 4-H and FFA during her high school years, she transitioned to open shows before joining The University of Findlay equestrian team. It wasn’t until she became an amateur that she started competing at AQHA events. “I had the opportunity to represent the Northern Ohio and Ohio Quarter Horse Associations as their queen and compete for two years at the Congress. I have served as an Ohio Amateur Association Director and as the youth team advisor to the Ohio Michigan Indiana Quarter Horse Association.”

When she’s in the show pen, Beth’s partner in crime is her 13-year-old gelding by Invitation Only named Only Promoting Me, aka “Stewart.” They’ve been a team for the past ten years. “I actually stole him from Andy Bonner, my longtime boyfriend,” Beth says. “He was supposed to be Andy’s horse, and I had sold the all-around gelding I’d been showing in November of Stewart’s 3-year-old year. So, I simply stole Stewart from Andy. Stewart had to learn Showmanship, Horsemanship, Equitation, and had a lead change in just a few months.”

At the beginning of Stewart’s career, Beth sought guidance from Art O’Brien and she credits him as being instrumental in helping to create a strong partnership between she and Stewart. “I would travel to the shows by myself and then we would go back to Findlay for Art to help me in overcoming any obstacles. This continued until we decided to move Stewart home full-time. Andy and I live on my parent’s farm, so we were able to convert my dad’s old machinery shed into a small indoor arena. I’m very thankful for all that Art taught me, because it has allowed me to maintain Stewart at home.”

While it might seem nice to be able to look out the window and see your horse grazing in the backyard, maintaining a show horse is a lot of work, and it’s something she and Andy do all on their own. “There are both pros and cons to having your horse at home. Getting Stewart prepped comes down to Andy and myself. There is no one else. Andy is great at helping me break down the patterns and coaching me at the shows. He videos patterns so I can later go back and critique my performance.”

“The biggest challenge we have is that we have to make the time to make sure Stewart is ready to show, so that means a lot of late nights in the barn. Stewart is quite the character and needs to be busy. He’s not a pull-out-of-the-stall-and-go-show horse. He likes to be ridden every day, and that requires a lot of time. I’m also a person who needs to ride a lot. I’ve never been one to hop on and go show. I need to know my horse. Riding every day is how I make showing in all around events work for me.”

In order to achieve the title of Supreme Performance Champion, Beth and Stewart achieved their Superiors in Showmanship, Equitation, Horsemanship, Western Riding, Trail, and Ranch Riding. They also have a Superior in Performance Halter Geldings. Their favorite events are Horsemanship and Showmanship.

“I love these classes because you have to be completely in sync with your horse, and the competition is always tough. There’s no room for error. This is where I feel I benefit from having Stewart at home. I’m able to spend time with him and I know him inside and out. Western Riding was challenging, because there aren’t always a lot of exhibitors in it, so it’s extremely difficult to earn points. Trail is also my nemesis, because I’m a little spatially challenged. Ranch Riding is always a fun class, because you don’t have to take things as seriously. It also helps that Stewart is super broke and can do all of the maneuvers.” 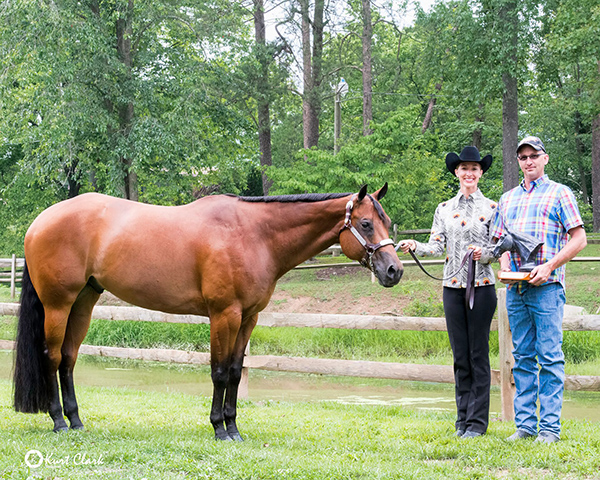 In addition to being a trusty partner in the show pen, Beth says that Stewart is quite the character and likes to keep things interesting. “He loves peppermints, really any candy, and Pringles. He also likes to admire how handsome he is in any reflective surface. Also, he has two miniature donkeys that he loves to torment and share his snacks with.”

But while Beth has a strong partner in Stewart and a support system in Andy, that doesn’t mean her journey to achieving the title of Supreme Performance Champion has been easy. She’s been a schoolteacher at Rossford Schools for the past 25 years. She began teaching in fifth grade and then moved to the junior high level to teach language arts. Recently, her career has brought her back to the elementary level and the hours and workload has been quite an adjustment.

“Being a teacher and showing can sometimes be very challenging. When everyone is off showing at the four and five-day shows, I’m at home working. We only get three personal days, and we cannot take them a day before or after a holiday, so I miss a lot of great shows. However, it’s awesome for the 2 ½ months during the summer, because I can go show and not worry about my job.”

“I do use my experiences with my animals and showing in my classroom quite often. I remember during my first year of teaching, when I was the Ohio Queen representing OQHA at the Congress, and I had to miss school for a week. My students wrote me good luck cards and were so excited when I returned.”

Trying to win the Supreme Performance Champion title wasn’t even on Beth’s radar for quite some time, due to the amount of hauling, time, and logistics required. Although it took ten years to achieve, they have finally done it.

“The Supreme Performance Champion was never really an award that I thought I could achieve. There were so many superiors to obtain, and I wasn’t hauling with a trainer. I’m sure when people looked at this gangly 3-year-old just starting his all-around career they couldn’t imagine the heights he would reach either. I had doubts myself at the beginning, but as he matured and we became a seasoned team, the award seemed to move closer to a reality.”

“There have also been so many fellow exhibitors who have supported us throughout our journey and encouraged me when I thought this award couldn’t be accomplished. I guess it took ten years to earn this award, and it’s worth every moment.”

Beth plans to continue showing Stewart as she brings along her next project, “Sophie,” an Only In The Moonlite filly that she recently purchased from Jeff and Liz Long. “She has some pretty big shoes to fill, so we will just have to wait and see how she comes along. I’m excited about her potential. Also, I’m only two years away from being a select rider, so, who knows, maybe a trip to the Select World will happen for Stewart. Stewart has really exceeded all of my expectations and the goals I have had with him, so we will let him decide. He’s more than likely not leaving our farm.”

Reflecting on this extraordinary achievement, Beth is thankful, appreciative, and hopes that her journey can inspire others. “I hope I have lead by example that you don’t need to have the most expensive horse or trainer to win an award like this. It just takes a lot of hard work and dedication. I encourage my fellow exhibitors to dream big and go for an award that you thought impossible. You just may achieve it if you work hard enough.”

“I would like to thank Andy. He has been my rock. He’s our biggest cheerleader and mediator at times. Stewart and I sometimes have creative differences. He’s the truck driver, encourager, reality checker, and coach. If it wasn’t for Andy, we wouldn’t have achieved this award. I would also like to thank Jeff and Liz Long for selling us Stewart and for being constant supporters, as well as Art O’Brien for helping Stewart at the start of his all-around career.”