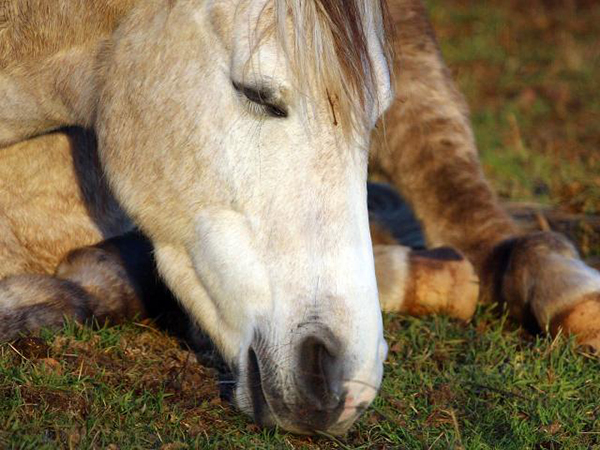 By: Amy Young, The Horse Report

1. A horse’s brain weighs 1.5 pounds, half that of a human brain, but is still one of the largest brains among land mammals. The encephalization quotient (EQ), a ratio of observed brain size to predicted brain size based on body size, is used to compare intelligence across species. The EQ for horses is between 0.8 and 0.9. The ratio for livestock species ranges from 0.5 to 0.8. Dogs and cats are around 1, with chimpanzees at 2.5 and humans at 7. However, current thinking suggests that the number of neurons and sizes of specific brain regions may be better predictors of intelligence.

2. Equine protozoal myeloencephalitis (EPM) is an uncommon cause of ataxia for California horses. UC Davis researchers recently reported the most common causes of spinal ataxia in horses euthanized and necropsied at the UC Davis veterinary hospital over twelve years. The prevalence of cervical vertebral compressive myopathy (CVCM) was 2.7%, equine neuroaxonal dystrophy/equine degenerative myeloencephalopathy (eNAD/EDM) was 1.3%, trauma was 0.9%, and cases of unknown origin were 2.0%, with the remainder diagnosed as other neurologic diseases. In contrast to older studies, EPM was not a leading cause of ataxia. Two previous studies also reported CVCM and eNAD/EDM among the top three causes of ataxia in horses. 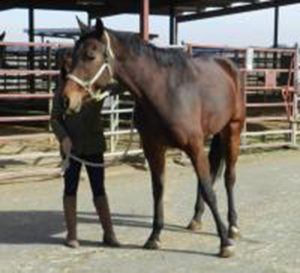 A horse with eNAD with abnormal proprioception.

4. Testing is needed to differentiate eNAD/EDM from CVCM. Ataxia, a wide-base stance, and uncoordinated movement are signs of various neurological issues. Some, such as EPM and trauma, can be determined based on clinical tests. It is not possible to definitively differentiate eNAD/EDM from CVCM based on clinical signs. The only way to conclusively diagnose eNAD/EDM is by examination of the brainstem and spinal cord after euthanasia. UC Davis researchers are working to develop biomarker and genetic tests that would improve eNAD/EDM diagnosis.

5. Shivers can occur in the front limbs, but only if the hind legs are also affected. Shivers is characterized by muscle tremors and exaggerated movement of the limbs during backing or lifting of a hind leg. Muscles of the head, neck and forelimbs are rarely affected. “Shivers” that appear to occur only in the forelimbs are more likely caused by lower neck pain, pinched nerves or other causes.

7. Horses that become drowsy and “catch” themselves before falling often suffer from sleep deprivation, not narcolepsy. Although horses can famously “sleep standing up,” they have to lie down to complete a full sleep cycle. Horses that cannot lie down due to factors such as pain, fear, being in a new location, presence or absence of other horses, lights, sounds, and changes in diet become sleep-deprived. Narcolepsy is characterized by excessive sleepiness and spontaneous rapid eye movement (REM) sleep triggered by excitement. It is rare in most species. In horses, it is a genetic disorder that has been documented in families of miniature horses and Lipizzaners.

8. First described over 100 years ago, equine headshaking is still not well understood. UC Davis researchers confirmed that the trigeminal nerve, a large nerve that runs across the face, fires too often in affected horses, causing tingling, itching, or burning. It is seasonal in approximately 60% of cases, and signs can be triggered in response to wind, light, or increased exercise intensity. In severe cases, horses may experience self-inflicted trauma or interference with eating, leading to compromised welfare.

9. Horses should be vaccinated against West Nile virus (WNV) to help prevent neurologic disease. Horses represent 96.9% of non-human cases of WNV. This mosquito-borne virus is now found nation-wide. Vaccines are effective in protecting horses against infection and have resulted in a marked decline in cases since the peak in 2004. The American Association of Equine Practitioners (AAEP) recommends WNV as a core vaccine. 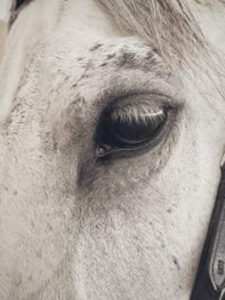 10. Horses with non-healing ulcers in the cornea of the eye should be evaluated for temporohyoid osteoarthropathy (THO). A progressive syndrome, THO results in bone thickening and the eventual fusion of the temporohyoid joint to the skull. Once fused, actions such as swallowing and chewing can cause fractures. In addition to a head tilt and signs of facial nerve paralysis, including deviation of the muzzle to one side and/or a droopy ear, damage to nerves that affect the eye can lead to decreased tear production and abnormal blinking, which can cause significant ulceration of the cornea. Affected horses might also have balance problems and commonly become deaf on the affected side. Long-term antibiotic treatment, and possibly surgery, is needed to treat the ulcers.