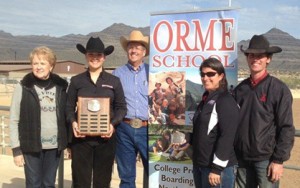 “This is a great accomplishment for Layla and we are all thrilled for her today,” South Carolina head coach Boo Major said. “Layla has proven herself to be one of the best, if not the best reiner at the college level so it’s always special when you’re able to win at a national show. Layla has a great work ethic and is very focused on being the best she can be, and she’s proved it this weekend between the New Mexico State meet on Saturday and the Shootout championship today.”

In the opening round, Choate defeated South Dakota State’s Ravienne Scott. In the semifinals, she knocked off West Texas A&M rider Marilyn Brandt to advance to the championship. In the championship round, she rolled past Baylor’s Katherine Berg.

Choate and the No.1 ranked Gamecocks (7-2, 1-2 SEC) are back in action on Feb. 8, when Carolina travels to face Georgia at the UGA Equestrian Complex.