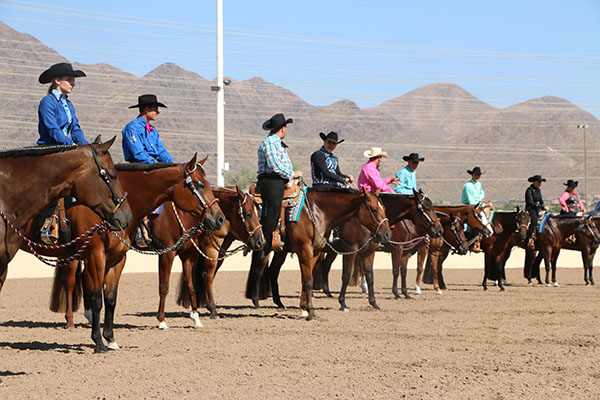 “If you build it, they will come.” Arizona Quarter Horse Association followed the call and doubled the size of its already popular AZ Fall Championship. In so doing, exhibitors’ dreams became reality.

After months of missing a slew of prestigious events, the horse show community converged at WestWorld in Scottsdale for the Cinch AZ Fall Championship and Pinnacle Circuit from September 25 – October 4. With 20,245 AQHA entries, along with NSBA, NRCHA, and non-affiliate entries, the total of 26,094 nearly tripled the numbers the Fall Championship posted last year.

AzQHA didn’t just add a second circuit; it expanded divisions. A large number of youth riders were present taking part in the Small Fry, 11 & Under, 12-14, and 15-18 divisions. To make up for the loss of Congress’ coveted futurities, AzQHA committed to filling the void. Sponsors enthusiastically jumped on board with generous added money of over $75,000 for NSBA classes. In addition to futurities, there were saddle awards, trophies, Circuit awards, Best of Show awards, All Around Awards, and the ever popular Prize patrol giveaways with thousands of dollars worth of products. 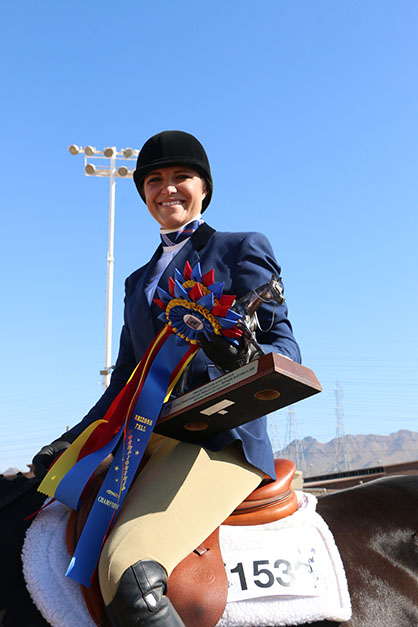 “I’m really thrilled to see that everybody got the opportunity to come out and enjoy all we have to offer in Arizona,” said Doug Huls, CEO of AzQHA and producer of the shows. “We had a lot  people here this year who have never experienced Sun Circuit or the Fall Championship.”

Exhibitors were presented with a top notch experience full of fun, great competition, and a huge variety of classes. Nearly 1,000 horses were entered in classes that ranged from Jumping and Cow Horse to Reining and rail. Both the facility and the staff handled the increased numbers with ease. Huls reflected, “Our nights went a little longer than we would have hoped for, but we are thrilled that we have so many horses that we had to go late.” Even with some late nights, the general mood was that of elation. Smiles were everywhere across the the grounds. While it was certainly warm in sunny Arizona, most classes were held in climate controlled arenas or covered outdoor pens.

The Ranch divisions were exceedingly strong this year. Ranch Riders from the littlest cowpokes to World Champions navigated the patterns. Support of one another was on full display at the show with hoots and cheers for each good go. Huls added, “I think the enthusiasm for the Ranch classes keeps growing. We’ve had a lot of turnout with AQHA approving the Ranch Trail and the Working Western Rail class.” AzQHA has featured non-AQHA Ranch on the Rail as well as Ranch Trail at its shows for a few years and both classes have always been popular. Huls continued, “We’re now seeing a lot of cross-over with our ranch riders entering the Ranch Trail, and they’re having a lot of fun doing it. We’re really excited about the future of Ranch division classes here in Arizona.” 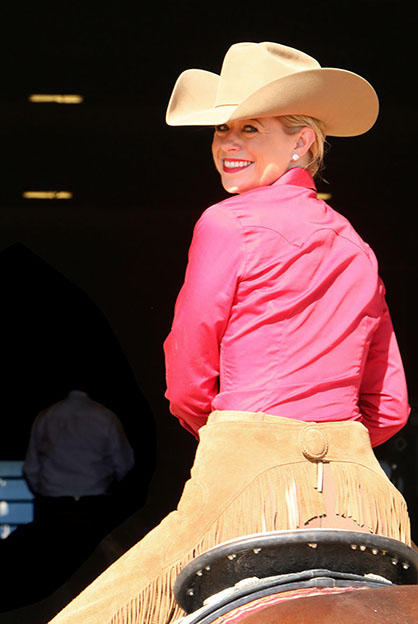 Highlighting the versatility and consistency of ranch horses, the High Point Ranch Horse Challenges combined points earned from both the AZ Fall Championship and the Pinnacle Circuit in Ranch Trail, Ranch Riding, Ranch on the Rail, and Halter. Champions in each division won $500 and a buckle.

The Open Ranch Champion was Metallic Cat, owned by Nancy Gillet and shown by Laurel Denton. Laurel was back in the saddle aboard MC Earn Some Bens, owned by Bobbi Patton, to win the L1 Open Ranch. The Amateur Ranch Champion was Spooky Melody, owned and shown by Sydney Freeman. In the Select Amateur Ranch, Tricia Sarchett and Mylanta Time showed rock steady over the week to claim the prize.

One of the highlights of the show was the $10,000 Added Rogers Heaven Sent Ranch NRCHA Futurity, which drew many of the super-stars of the cow horse world. CR Woody Dig It, ridden by Corey Cushing, racked up the most points, winning $4,350 for owner, Dave Belson. Second place went to DT Time To Stray, ridden by Shadd Parkinson and owned by Hannes Winkler, winning $3,262.50.

The $10,000 Added Blue Ribbon Custom Tack 2-Year-Old Maiden Western Pleasure was a highlight of the NSBA Futurities. Sponsored by Capital Quarter Horses/Hay Goodlookn and Blue Ribbon Custom Tack, this event gave those horses that were prepped all year for a Congress debut a new venue to shine. Aaron Moses, who had already notched a spectacular week in Scottsdale, presented Redwine Or Moonshine, owned by Bruce Vickery and Anthony Montes, and won $5,123. “It’s always a great feeling when an un-shown 2-year-old comes out and shows like that their first time,” said a beaming Aaron right after his win. 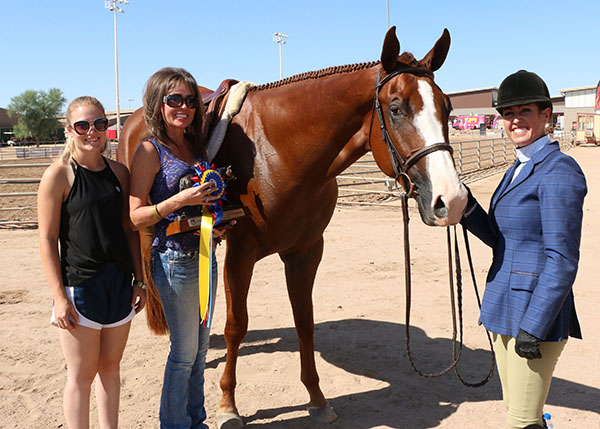 There were plenty of saddle awards at the show too. Bob’s Custom Saddles were awarded for High Point champions in three divisions of Horsemanship. The Level 3 Youth Horsemanship went to Wearin Only Moonlite and Hanna Olaussen. Leathals Hot Weapon and Carey Nowacek tallied the most points across 10 judges to win the Level 3 Amateur Horsemanship award. In Level 3 Select Amateur Horsemanship, Linda Coakley was rocking it on Rockstar N The House to take home a new saddle.

L1, L2, and L3 Non Pros were rewarded for their efforts across a spectrum of classes. Points were tallied from Showmanship, Horsemanship, Western Pleasure, and Halter, and the champions received a  Superior Saddlery Saddle. The L1 award went to DW Krymsun Advantage, shown by Megan Neugebauer. In L2, Party Favours and Kara Sisco accumulated the most points. Kent Ray Taylor had a spectacular show with Don’t Think Twice in the L3 and took home a new saddle. A Blue Ribbon Saddle was awarded to So Good To Be Me, owned by Caroline Cavallo and shown by Blake Weis, as the overall Level 3 Senior Trail Champion.

Best of Show Awards acknowledged the high point winners who showed to all 10 judges in the two circuits. Champions won Rod Patrick Ostrich boots and a Cinch Jeans and Shirts certificate. 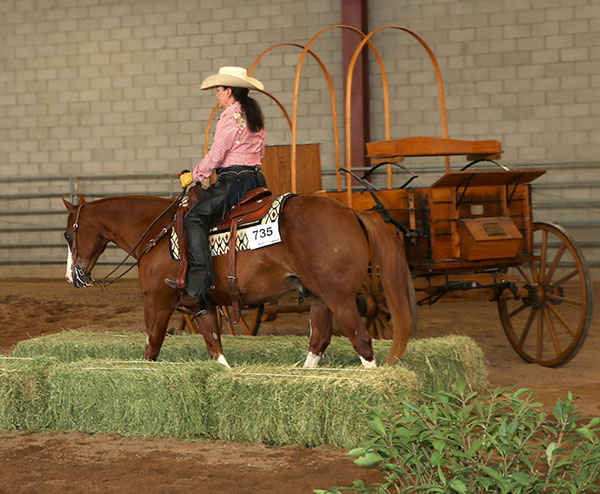 Several All Around division awards were presented. The Open High Point All Around Division went to Kathy Huspeni and Chad Evans showing Sugaray. Gentry Pickett and Ponderosa Pine picked up the Amateur High Point in the All Around Division, while Amateur Select was won by Kent Ray Taylor and Don’t Think Twice. Kent also took Best of Show High Point L1/ Green Horse with Snap It Send and received the L1 champion buckle award.

More youth divisions also meant more awards. The Youth 18 & Under All Around Division was Won Vital Code RV with Ella Petak. Ella took home Rod Patrick Ostrich Boots and a Cinch Jean and Shirt Certificate. Best of Show All Around L1 Youth Emma Dejong and Just Call Me Lazy won the L1 buckle along with the boots and certificate. The Best of Show All Around L1 Amateur winner was Meghan Murphy with All Envy. Trinity Eserjose took home a trophy for her Best of Show High Point award in Small Fry Walk Trot 9 & Under. Best of Show High Point 11 & Under was a tie between Miley Adkins showing Only in Hollywood and Maisy Ewing and HF Tahnee Too. Both riders won a trophy. Small Fry and 11 & Under circuit champions were awarded buckles, producing lots of delighted smiles. 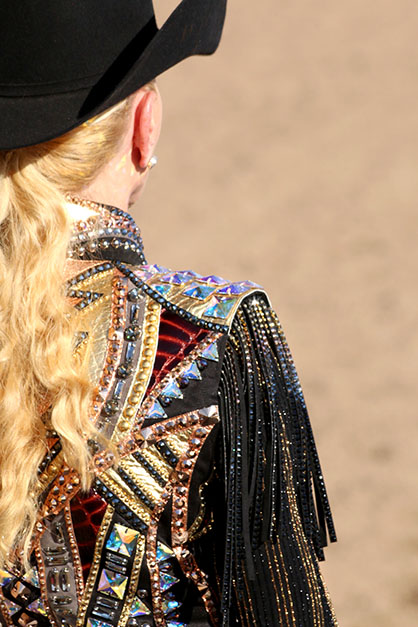 Planning to double the size and length of the AZ Fall Championship took a leap of faith in these uncertain times. After all the preparation, discussions, and additions of classes, it was still only a guess as to what kind of turnout the show would actually have. For AzQHA, the results were unprecedented with record smashing numbers. Returning exhibitors, as well and those new to the Arizona experience, were thrilled and delighted to partake in one of the largest shows of the year.