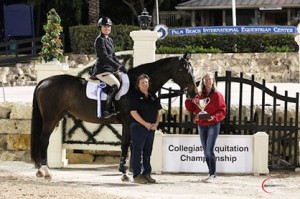 Wellington, Fla. – Twenty one-year-old Katherine Schmidt, of Ridgefield, CT, emerged victorious from the Collegiate Equitation Championship on Friday evening at the FTI WEF. Schmidt is a junior at the University of South Carolina (USC), where she is a double major in Marketing and Management.

Schmidt made it through the first round of the evening’s competition after beating out Auburn University’s Christina Lin. Schmidt rode David Raposa’s Chanel to a 76 to advance to round two. Schmidt secured her trip to the final round with a score of 87 aboard Ashleigh Stewart’s Coco, jumping past Baylor University’s Samantha Schaefer.

Schaefer was also awarded with the Professionals for NCAA Equestrian High Score Award for her first round score of 90 with Ilan de Taute, owned by Alan Chesler.

The Collegiate Equitation Championship pits the nation’s best varsity level collegiate riders against each other in a head-to-head competition. Riders are organized into brackets, where each bracket must each complete a course on the same horse, which is unfamiliar to them. The rider with the highest score on that horse advances to the next round.

“Schmidty’s just a great person. She’s a really hard worker. She’s always the one that’s going to be practicing extra and trying to be better. She’s very modest. I think she rides beautifully, and I can’t say enough nice things about her. She’s definitely someone that deserves this kind of win,” Gwin smiled.

A testament to Schmidt’s humble character is the fact she failed to mention she’s undefeated this season for the USC Gamecocks. Gwin revealed she’s yet to be beat, with her record currently standing at 8-0 before her victory in Wellington.

While Schmidt and her teammates will hit the road to take on the University of Georgia on Saturday, the Taylor Harris Insurance Services (THIS) Children’s Medal will kick off hunter competition for the weekend at the FTI WEF. Jumper action continues tomorrow with the highlight of the week, the $370,000 FEI World Cup™ Qualifier Grand Prix CSI-W 5* presented by Rolex, at 7 p.m.

Schmidt, affectionately known as “Schmidty” to her teammates and coach, put in consistent rounds throughout the night before laying down an incredibly handy final course with Striptease.

“I saw Sam go and [Striptease] got a little quick, so I thought I could manage her here and there and try to slip inside [for a few of the turns]. I think I was able to get her back a little bit early and do the inside turns, which I think set me apart from Sam at the end of the day,” Schmidt commented.

Schmidt had total confidence in her final round mount, a 15-year-old Royal Dutch Warmblood mare, despite never getting on the horse before entering the International Arena Friday evening.

“Striptease knows her job. She was happy to be out there. It was nice to kind of relax a little bit and try to show off,” Schmidt explained. “She’s been around the block I think. She was a little bit downhill, so I had to pick her up a little bit, but she was very sweet and would jump from anywhere.”

Schmidt was born into a family of horse lovers; her mother had horses all her life and Schmidt described being born with ponies in her backyard. By the time she was a toddler, she was already in the irons. After showing ponies throughout her childhood, Schmidt went on to the equitation and jumper divisions.

BISHOP, Ga. – No. 1 South Carolina used a pair of 3-2 wins by its equitation over fences and horsemanship squads to propel the Gamecocks past No. 6 Georgia, 10-9, on Saturday at the UGA Equestrian Complex. The Gamecocks improve to 8-2 overall, 2-2 in SEC play, while the Bulldogs fall to 7-3 overall, 3-2 in conference action.

With the win on Saturday, the Gamecocks become the first visiting team ever to win three consecutive meets over Georgia at the UGA Equestrian Complex.

“I’m really proud of the way our girls battled today, and I thought we rode very well in a tough environment,” South Carolina head coach Boo Major said. “Our girls weren’t fooled by Georgia’s No. 6 ranking, they knew this was a battle of two No. 1 caliber teams, and I was proud to see them fight all day for every point, and in the end, we were able to come out on top. In order to beat Georgia, especially at their place, you have to bring your A-game and cannot give away any points. There were a couple of points that we could have ridden better for, but the key was that we didn’t give any points away today, and I’m proud of everybody.”

Saturday’s meet started in the hunt seat arena, where the Gamecocks won three-of-five jumping points to take an early 3-2 lead.

The Bulldogs opened the jumping by winning the first point, but South Carolina junior Alexa Anthony evened the score at one apiece when she edged Georgia’s Meg O’Mara, 87-86, while also winning MVP honors for the second straight meet. Carolina won the next two points to take a 3-1 lead when junior Katherine Schmidt and sophomore Samantha Smith posted back-to-back wins. Schmidt, who made the 607-mile trip from Wellington, Fla. earlier in the day fresh off her win on Friday night at the Collegiate Equitation Challenge, defeated Georgia’s Kylee Arbuckle, 87-85. Smith followed with a one-point win over Megan Southam, 79-78. The Bulldogs claimed the final flat point to cut the Gamecocks’ lead to 3-2.

Up by one point as horsemanship got underway in the western arena, South Carolina senior Katie Kopf posted one of her best rides of the season to defeat Georgia’s Anna Sasser, 76.5-75.5, to give Carolina a 4-2 lead. The Bulldogs won the second point to cut Carolina’s lead to 4-3, but Connecticut natives Johnna Letchworth and Kelsey Urban posted back-to-back wins to give the Gamecocks a 6-3 advantage. Letchworth posted an event-high score of 77.5 to defeat Georgia’s Heather Schmidt by four points, earning the senior MVP honors. Urban followed with a 75-74 victory over Paige Stawicki, to give South Carolina a three-point lead. Georgia won the final horsemanship point cut the Gamecocks’ lead to 6-4 at the halfway point.

The second half of Saturday’s meet kicked off in the hunt seat ring, where Carolina and Georgia each won a pair of points. The Bulldogs again won the first two points to tie the score at 6-6. South Carolina re-took the lead on the next ride, when Schmidt capped off her 2-for-2 day with a 79-75 victory over Georgia’s Southam. Smith followed Schmidt with a 2-for-2 performance of her own, when the Rhode Island native knocked off the Bulldogs’ Liza Finsness, 81-77. In the final flat head-to-head, South Carolina’s Anthony and Georgia’s Olivia Dorey rode to an 84-84 tie.

Holding an 8-6 lead entering reining, the Gamecocks needed to win two points in order to win the meet outright, and to stay alive in the race for the No. 1 seed at next month’s SEC Championship in Blythewood. The Gamecocks wasted no time in closing the door on Georgia’s hopes for a comeback, as sophomore Sarah Bouchard and junior Cody McMillion won back-to-back to points to extend Carolina’s lead to 10-6 with just three points left. McMillion earned MVP honors, as the South Carolina knocked off Georgia’s Charlie Thiel, 74.5-72.5. With the meet already clinched, Georgia went on to final three points, as the Gamecocks held on for the 10-9 win.

South Carolina returns to action on Feb. 22, when the Gamecocks host No. 9 Texas A&M at One Wood Farm.