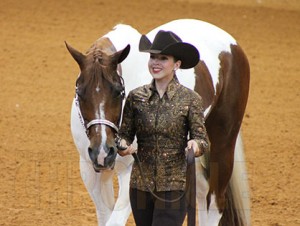 For most young horse people, representing a collegiate team while using your equestrian skills is a dream come true.

A number of our graduating AjPHA members have committed to collegiate equestrian teams across the country beginning in the fall of 2014.

Shelby Friday of Dublin, Ohio, has signed with the Gamecocks for the 2014-2015 season. She will be a part of their Western team and compete in horsemanship.

Carrollton, Texas, resident and APHA world champion Libby Collins secured her spot on the Cowgirl roster through her successes within AjPHA.

Paige Kemper of Gilbert, Arizona, will join the K-State Horsemanship team—and her sister, Danielle, another KSU rider—for the 2014-2015 season.

If you are or know of AjPHA members who are going on to compete at the collegiate equestrian level, tell us about it! Send an email to marketing@apha.com