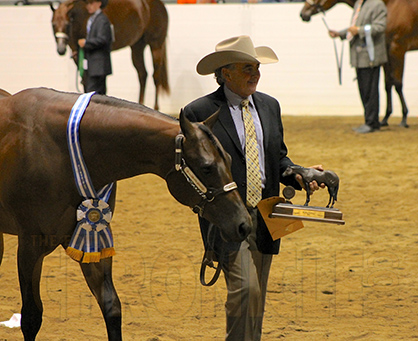 King Coolsified lived up to his royal moniker this morning at the Quarter Horse Congress in Open Yearling Geldings. At the lead to claim a Congress Championship title for owner Keitha Stutzman was Tom Robertson.

Although “Brownie” has been in Robertson’s barn since the very beginning, he just recently became part of Stutzman’s show lineup.

“I bought in him Des Moines, Iowa at the [Iowa Breeders’ Futurity] on a Saturday,” she says. “We transferred all the papers over, and we showed him at the Futurity the next day. He won his two classes. Then, we brought him here, and here we go!” 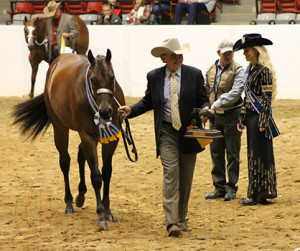 “Kenny Brown out of Creston, Ohio bred and foaled him out, and Tom has always been his trainer. Tom tried to get me to buy him since he was a baby, and I kind of dragged my feet. He was pretty, but I just wasn’t sure. I have one other horse with Tom, so I would see him in the barn all the time. I said to Tom, ‘If I was going to buy a second horse, which my husband didn’t want me to have, I would buy him.’ In Iowa, finally, I said, ‘I think I want to own that horse.’ Kenny really wanted to sell him, and he really wanted to sell him to us. When I came here, I didn’t know what was going to happen, because it’s another horse show, a whole different ball game.”

Stutzman is hoping Brownie will continue his winning ways this Friday, when her 16-year-old grandson Cade Prime takes the lead for the youth division of the class. Also, Stutzman will compete in the amateur division next Monday. 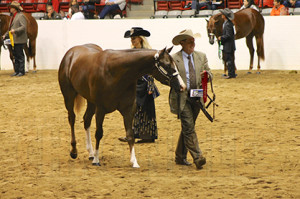 “My 16-year-old grandson is still in school, but he’s coming on Friday,” she says. “He’s really laid back, so he will think [Brownie’s] win was nice, but his mother will be jumping up and down. She’s a schoolteacher, and I’m pretty sure she was watching the live feed in her classroom!”

We wish both Keitha Stutzman and Cade Prime the best of luck in their upcoming classes here at the Quarter Horse Congress with King Coolsified!