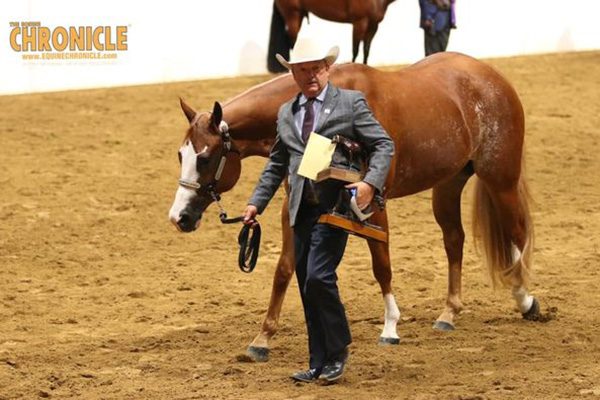 Today’s classes at the Quarter Horse Congress marked the final Open Halter events of the show. First, Ross Roark led Hez Blazin Trouble to win Performance Halter Geldings for Bonnie Sheren. “Parker” can typically be seen in the all-around pen competing in classes like Trail and Western Riding. When Jason Smith of HighPoint Performance Horses approached Ross about showing the gelding here at the Congress, he was excited.

“I’ve seen the horse show and always thought he was a beautiful horse,” Ross says. “He’s good on his feet and legs. He’s pretty headed and necked. He’s good in his hocks. From the profile, he’s a beautiful horse. He shows like a million dollars. I was very comfortable and confident showing him today. He showed unreal.”

The Reserve and the Limited winner was Rick Baker with The Krymsun Invester. Third was Dan Trein with I Can’t Sleep.

Today was a special day for the Headley family, because it’s Kathy Headley’s birthday! And what could be better for a birthday present than a Congress Champion? 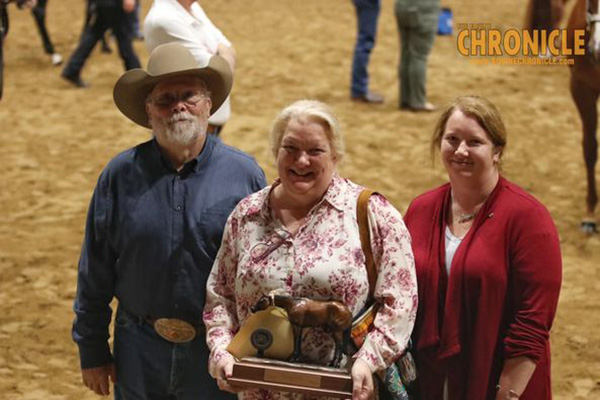 Ross Roark was at the lead of their homebred yearling, Heartz Desire, a foal by their stallion, Heartz On Fire, and out of their mare, Alluring Intention, to win Yearling Geldings. “Quigley is the second foal out of this cross, but he’s the first to be shown and the first Congress Champion,” Sarah Headley says. “His momma was Grand Champion here, and his daddy was Grand Champion here, so we said he had big shoes to fill!”

“He’s so pretty across his back, and he’s got that big hip and pretty neck. He’s the real deal. I foaled him out at the farm, and we knew he was special. You try not to be barn blind, and we had other babies that we liked, but when he came we all thought we might be on to something. He’s pretty cool.” 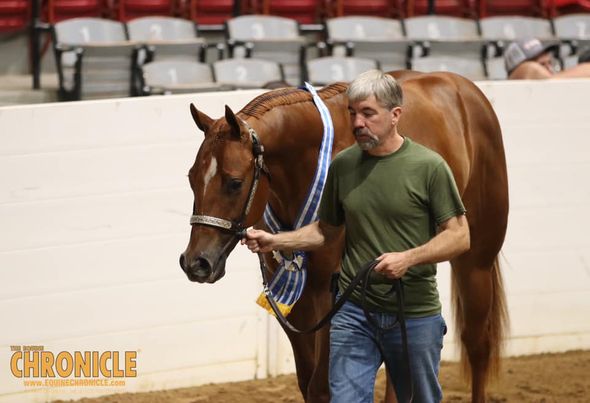 “We’re hoping he has that promise going forward, and he will get better and better,” Kathy Headley adds.

“A lot of times, when we foal them out, we start being… not critical, but realistic about what’s going to be good and bad. When he came out, we said, ‘Woah!'” Steve Headley continues.

The Headley family’s trainer, Don Griffey, has fit the gelding from the start, and Ross Roark showed him at the Breeders Halter Futurity. Up next, there is the possibility that the gelding will head to the AQHA World Show. But for now, Kathy is simply happy to enjoy her birthday, good fortune, and many blessings with friends and family.

“I’m 62 and proud of that fact!” she says. “My mom always tells me to be glad you’re still above ground, you’re still moving, you have your health… and now a Congress Champion! We have all these blessings, friends, and great horses.” 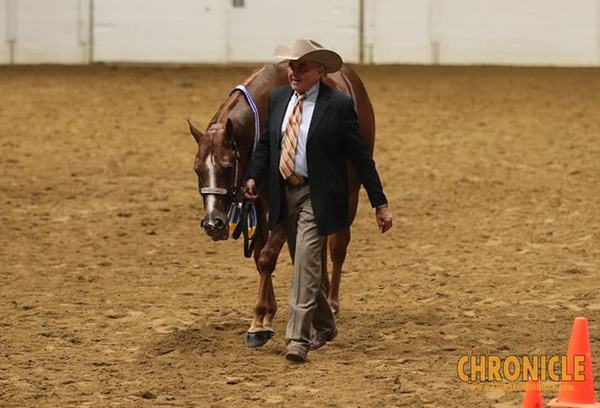 Tom Robertson and Don’t Mind Mee were named the winners in 2-Year-Old Geldings. Reserve was Luke Castle with Hello IEM Johnny Cash. Third was Dewey Smith with Running On A Hope.

Dewey Smith was at the lead of Premos Secret for his wife, Tammy Smith, to win 3-Year-Old Geldings. Tammy describes “Teddy” as a true gentle giant that has massive size with superior correctness. 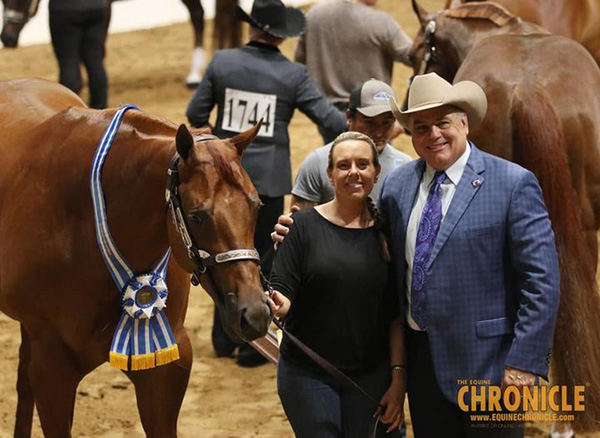 Tammy and Dewey Smith with Teddy

“The farm purchased this horse’s mother, Running In Heels, from Craig Parmley and then bred her to PF Premo. This is the baby. Jerry Robinson showed him as a baby, and then Mary Paulte came to the farm, fell in love with him, and purchased him as a yearling. She’d never shown at the Congress before, and she was Reserve here with him. Then, she took him home and did her own thing, but he continued to grow… a lot! She also has broodmares, and Dewey and I owned a broodmare in foal to Premo. She asked one day, since she wasn’t showing much anymore, if we would consider doing a little horse swap, and that’s how we got Teddy!”

Teddy is a special horse to Tammy, so much so that she gave him his barn nickname in loving memory of her former youth horse. “Teddy Timezone was my youth horse, and I would never name another horse Teddy. So, when I named this horse Teddy, I told him, ‘Now listen, you’re pretty special and have a big name to live up to! He’s so balanced. Whenever you get something so big, sometimes you lose the balance, but he’s so correct and so sweet.”

Reserve was Kelley Wainscott with E Ventually. Third was Tom Robertson with He Is The Exception. 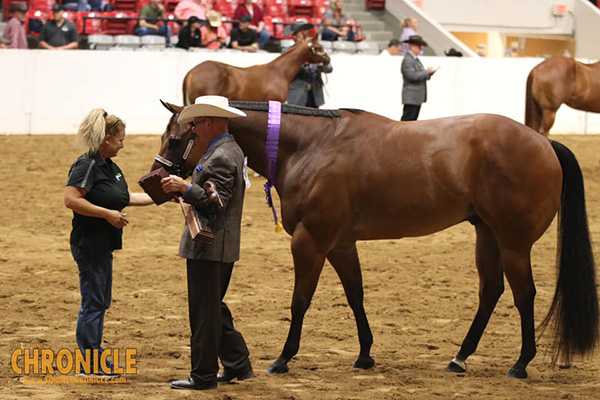 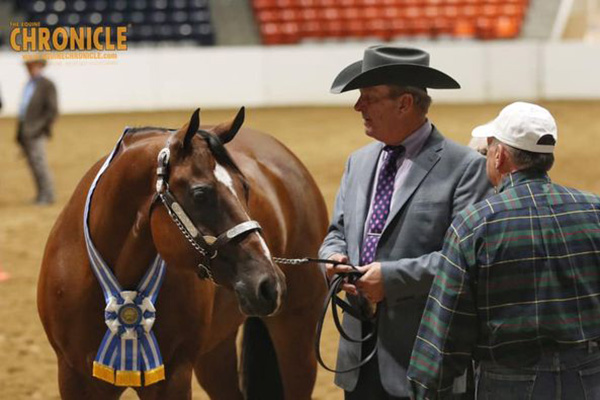 Rick Baker with The Krymsun Invester 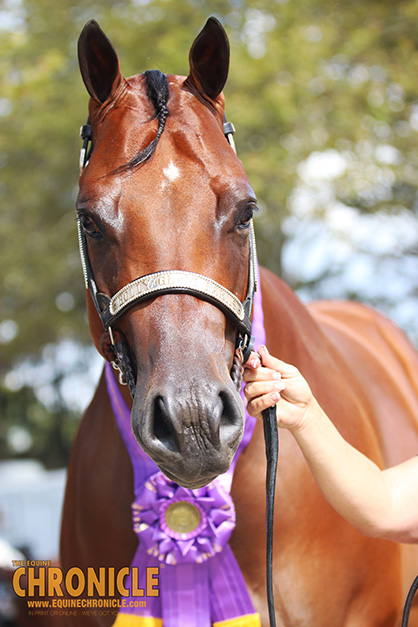