The Makings of a Leading Owner 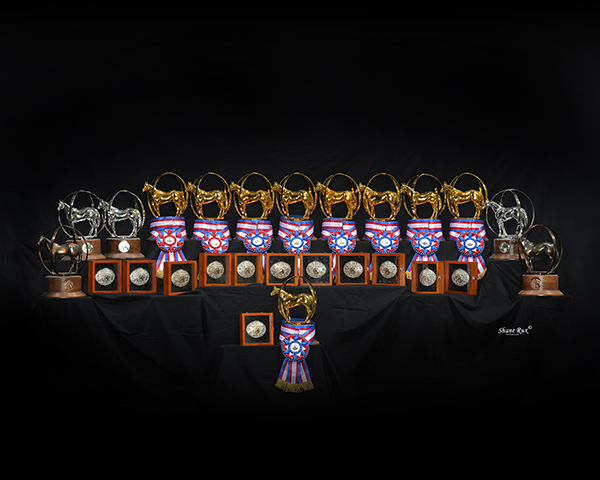 A banner year for Dan and Katie Fox.

2020 was an interesting year on all fronts. It resulted in incredible lows, dramatic disappointments, and a considerable amount of fear and anxiety. However, the sparkling moments of accomplishment, encouragement, and victory shine even brighter when contrasted with the darkest days.

For the AQHA World Show Leading Owner- Dan Fox- and Reserve Leading Owner- Warren English, the 2020 show season culminated like most, at the AQHA World Championship Show, with huge honors. We chatted with Dan and his daughter, Katie, as well as Warren, to find out more about the horses that helped them earn these achievements. 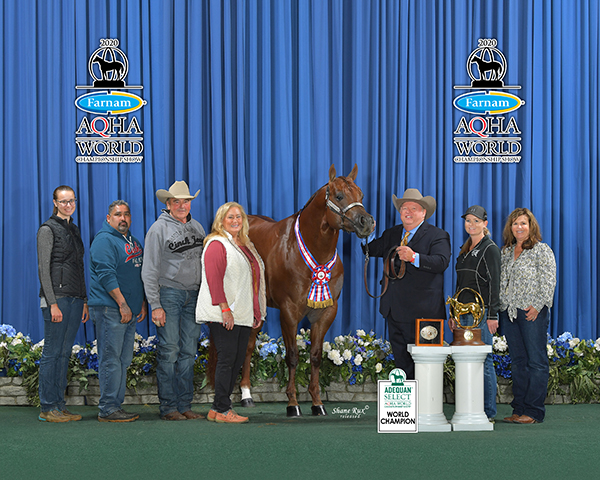 “This is the first time we have won this award,” says Dan and Katie. “We have been the runner up in the past, but never won it. It’s not something we set out to do, but after showing in the select classes, and doing so well, we thought we would have a good chance at it. These were the best set of horses we have ever brought to the World Show, and it was gratifying to get rewarded for it.” 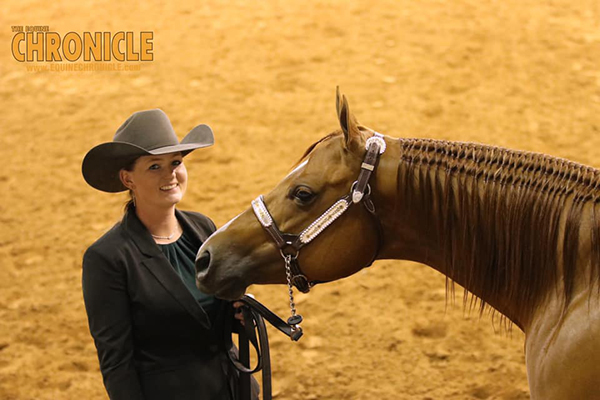 That’s certainly an impressive list of accolades, but Dan and Katie are simply thankful that they were able to compete at a world-caliber event following the disappointing cancellation of the Congress. “The entire show for us was pretty incredible,” they say. “We were really looking forward to the Congress this year and were pretty upset when they cancelled it. We just regrouped and set our sights on the World Show. It didn’t disappoint. It got better and better each day. You only dream of having a show that successful.” 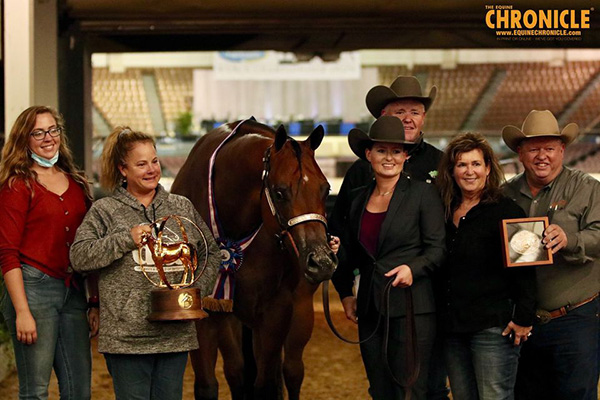 Similarily, they can’t pick one favorite horse they competed with at the event. “Each horse is special in their own way and has their own unique story,” they say. “CR Peacemaker is out of the first filly that we ever raised- out of our great buckskin mare, A Classic Edition. She’s really the one that got us started in the Halter industry, so it was really neat getting to win with a grandson of hers.”

“FR Night Lyfe is the first horse that we bred and raised and won a World title with. Katie started her when she was two and trained her on her own at home. She hauled her this year and put over 20 points on her in Ranch Riding. She went to Luke Castle about 30 days before the World Show, and he put the finishing touches on her to get her ready.” 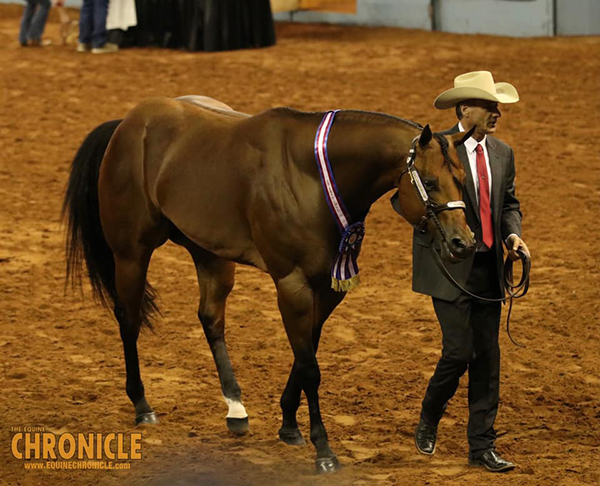 “Solair has been a great horse since day one. He just keeps getting better and better. He loves to show and makes it fun and easy when you get out there. Everyone can’t help but stare at him. Romeiro has always been a really fun horse to show. He’s very good mannered and quiet for a stud. He also loves to get out there and show. You just get him set up, and he stands there like a soldier.”

Looking towards the future in 2021, Dan and Katie are anxiously awaiting the arrival of the first foals by CR Peacemaker. “We have about 10 of our own coming. We’re excited to see what he will produce and look forward to breeding more mares to him in 2021. As far as showing, we will be back at it again! Solair and CR Peacemaker will be in the aged divisions. We plan on showing FR Night Lyfe again, and Romeiro’s first crop of foals will also hit the show pen.” 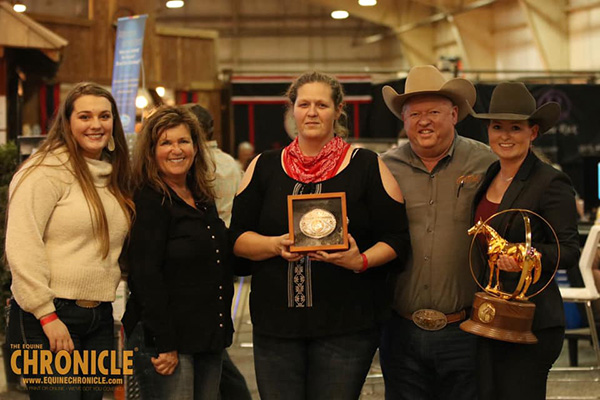 “We want to thank the AQHA staff for putting on a great show despite the tough circumstances we faced this year. We also want to thank the judges for recognizing and rewarding our horses. In addition, we’d like to thank the great trainers we have that bring out the best in our horses: John and Danielle Shepard, Luke and Abbi Castle, Tom and Mary Robertson, Steve and Becky Meadows, Shadd and McKenzie Parkinson, Tyler Merrill, Ted Turner Jr, and Ross Roark. It definitely takes a village!”

Warren English was the Reserve Leading Owner in 2019, and he repeated the feat in 2020 thanks to five exceptional horses. His beloved mare, Baby I’m Worth It, aka “Penny,” was the World Champion in Open and Amateur Aged Mares. Caught Ya Lookin, aka “Lucy,” was Reserve in Amateur and fourth in Open Three-Year-Old Mares. Eventually, aka “Denny,” placed sixth in amateur and 11th in Open Two-Year-Old Geldings. Living On Sunshine, aka “Layla,” placed third in Amateur and was Reserve in Open Yearling Fillies. Stormy Krommer, was fourth in amateur and fifth in open. 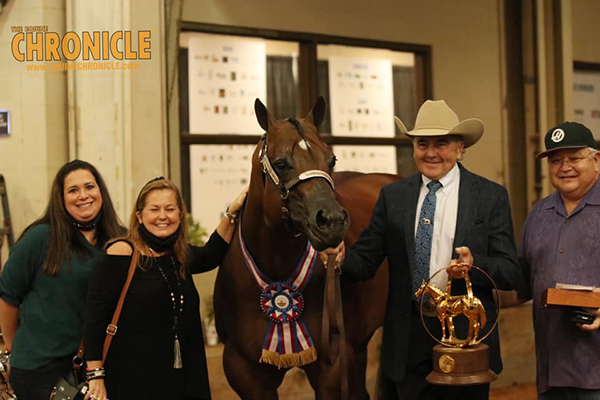 Tom Robertson with Baby Im Worth It

Warren and his family’s most memorable moment from the show was seeing Penny receive her ninth, tenth, and eleventh World Championship titles. “The Reserves with Lucy and Layla were also special,” he says. “Layla was bred at our farm and we are very proud of her. But, Penny has to be my favorite, although I’m proud of all our horses. She’s my first Halter horse, and she’s a once-in-a-lifetime horse!”

Warren is very excited about the future of his weanling filly by Evinceble, named Baewatch. In addition, he has a weanling filly by Very Cool, named A Little More Lace, and a 2-year-old by Very Cool, named Kaanapali Dolly. In the breeding barn, there will be babies coming from Baby Im Worth It, Caught Ya Lookin, and Cool Kissin Kid, the dam of Lucy and Layla, so Warren plans to keep it all in the family with his proven maternal bloodlines in the New Year.

Warren would like to invite folks to visit his place in the spring of the New Year to check out all of the fresh babies. “With BSB Quarter Horses and Steve Jensen’s Temptation Farms, Michigan is a great place to buy a baby!”

Click on the links below to view articles that feature both winners.