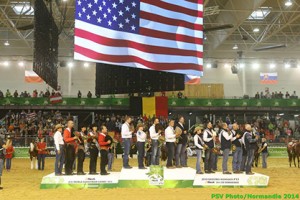 Continuing their dominance in the growing sport of reining, Team USA showed they’re still at the top by winning their fourth team gold medal at the 2014 Alltech FEI World Equestrian Games in Normandy. Incidentally, this is only the fourth time reining has been held during the WEG.

After yesterday’s rousing start, with USA’s Andrea Fappani taking the lead with a 224 on Custom Cash Advance, the team picked back up in the early morning hours with Mandy McCutcheon, the first female to qualify for Team USA, tying Fappani’s score on Tim and Colleen McQuay’s Yellow Jersey. That score would continue to lead the competition until teammate Shawn Flarida rode in on Michell Kimball’s Spooks Gotta Whiz and blew the doors open on the Caen Exposition Center with a 229.5. That score solidified the gold, giving Team USA a cumulative score of 677.5. Team Belgium, led by Ann Poels on Nic Ricochet, earned the silver for the second WEG in a row, with a 663. Thanks to Martin Muhlstatter’s score of 224, Team Austria earned the bronze medal with a 658.5.

Two other riders representing the United States also rode in the individual qualifying competition, hoping for a spot in the individual finals. Tom McCutcheon rode the palomino gelding Dun Git A Nicadual to a score of 221, tying USA’s Jordan Larson and HF Mobster for eighth place overall. Troy Heikes finished 27th with Denise Bixler and Steve Tarani’s Lil Gun Dunit and hopes to have a chance at the individual finals with a ride in the consolation round later this week.

The air was electric as each member of Team USA entered the pen for NRHA pattern number six. It perhaps reached its loudest point when NRHA leading rider, Shawn Flarida, walked in with “Baby Spooks,” looking calm and cool.

“It was an absolutely awesome run by Spooks Gotta Whiz and Shawn,” says Michael Miola, owner of Custom Cash Advance. “They broke the glass ceiling of 224, and the crowd was going crazy. It meant a gold medal for Team USA for sure.” 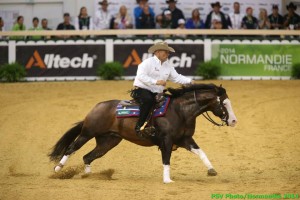 For Michael and Michelle Miola, the entire experience has been a surreal dream. Ever since Fappani made the team at the Kentucky Cup in April, the couple has been preparing themselves for the events in France. Now, they’re the owners of a gold medalist and a big part of helping Fappani’s golden dream come true.

“The feeling is very emotional—I didn’t think it would be, but it is,” Miola says. “Cash is such a pleasant horse to be around. To see him and Andrea being honored like this, along with the other members of the team, brought tears to both Michelle’s and my eyes, especially when they played the National Anthem.”

While there will be some celebrating among the Americans, the competition isn’t over just yet. The individual finals will take place on Saturday night. It will be every rider for him or herself, going for individual gold. Judging from the results from the qualifier, there’s a good chance for a USA sweep at the podium.

“We really don’t have the time to let [the team gold medal] sink in, because now we have to get ready for Saturday night,” Miola says. “Andrea is determined to bring home the individual gold medal, which means he has to beat [Flarida and] Spooks Gotta Whiz. On Saturday night, all of the horses and riders are going to go all out—no holds barred! It will be a very exciting night for sure. There will be no room for error—the slightest bobble will mean the difference between gold and silver.”

Following the results of today, Miola couldn’t be any happier. Spooks Gotta Whiz is sired by one of his other stallions at Silver Spurs Equine—Spooks Gotta Gun.

“From my perspective, as a breeder, we’ve already won,” Miola says. “Cash has proven himself as a top breeding sire and Spooks Gotta Whiz just continues to prove what a great sire Spooks Gotta Gun is. No matter how it ends, Silver Spurs Equine and our magnificent stable of stallions wins.” 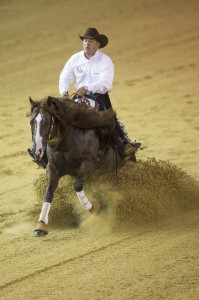 View the rest of the results here: http://www.normandy2014.com/live/7/reining