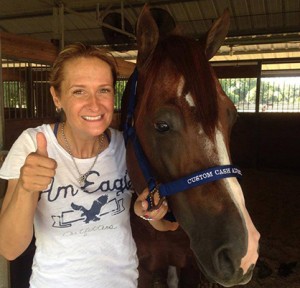 The 2014 FEI Alltech World Equestrian Games kicked off with a rousing opening ceremony over the weekend in Normandy. The Team Reining competition began bright and early on Monday morning, with the first two rounds of the team competition and individual competition taking place in the Exposition Center in Caen, France.

After a successful completion of the horse inspection on Sunday, where all six members of Team USA passed, Custom Cash Advance’s owner Michael Miola said both he and rider Andrea Fappani felt confident going into the competition. Fappani rode Cash through some warm-up rides at the venue over the weekend, just to get the horse used to the building and the footing, and he had no complaints.

Monday morning dawned with Troy Heikes competing first, as an individual, for USA aboard Lil Gun Dunit, owned by Denise Bixler and Steve Tarani. He scored a 214 and is currently sitting 15th in the individual standings.

Also, in the morning session was Cash and Fappani. The pair competed for both Team USA and for the individual qualifier.

“As soon as Cash and Andrea entered the arena, the crowd started going wild,” Miola reports. “Cash and Andrea were ready and executed two sets of lightning fast spins. By this time, the crowd was cheering and stomping in the stands with their feet so loudly I couldn’t even hear myself cheer!”

Miola said the “ear-splitting cheers” never subsided throughout Cash’s run and got even more intense as the pair set up for their closing rundowns and stops. “The scores before Cash’s run weren’t very high, with a 218 leading,” Miola explains. “When Andrea’s pattern was complete, the crowd continued cheering and stomping until the score was announced—a 224. Then, the crowd erupted again! I have never experienced this level of enthusiasm in my life. The Europeans really love reining.” 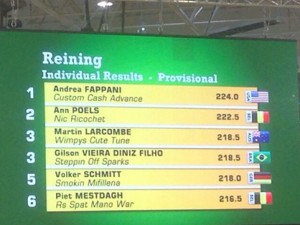 Check out who’s at the top of the current individual standings board at the 2014 WEG! Photo courtesy of Michael Miola.

Once the pair started cooling off, officials from the American Quarter Horse Association and the National Reining Horse Association came down to congratulate rider and owners. The pair is leading going into day two, just over Belgium’s Ann Poels and Nic Ricochet with a score of 222.

Miola reports that team spirit is very high right now, as Team USA leads after teammate Jordan Larson rode the buckskin stallion, HF Mobster, to a score of 221, which is good enough for the third place slot in the individual round. That brings Team USA’s total to 445.0, over Belgium’s 439.0, and Germany’s 436.5. Team Australia has a score of 435.5 and Team Great Britain rounds out the top five with a 429.

“Andrea feels great [about his run and chances],” Miola says. “Cash hardly broke a sweat this morning. Andrea believes Cash has plenty left for the finals on Saturday night.”

Tuesday will see the conclusion of the team competition for reining, with team members Mandy McCutcheon and Shawn Flarida still to ride. In addition, Tom McCutcheon, WEG individual gold medalist, will ride Tuesday for the individual qualifier.

Click here to watch a Facebook video of Andrea and Cash’s run. We love the encouraging comments that can be heard in the background from his proud owner “Come on Cash. Come on buddy!” and how the video shakes uncontrollably because of the stomping in the stands!