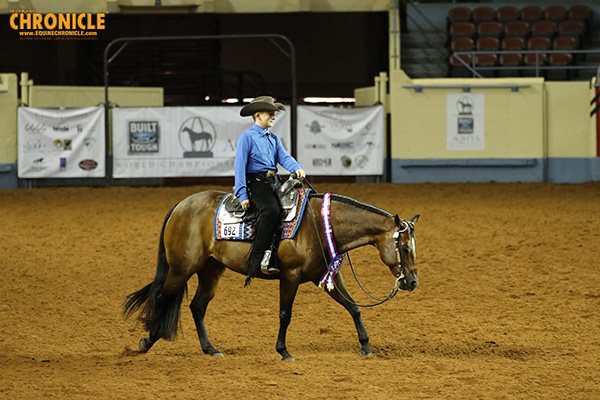 It was a very late night and early morning for Lane Kail, who rode A Good N Hot Machine to win L2 Western Pleasure yesterday evening. After going to bed at nearly 1 am, he was back up at 6 am to prepare for today’s 13 and Under Western Pleasure class. His little mare, “Goody,” pulled out another exceptional performance and helped Lane win his second title at his first Youth World Show.

“I’ve only been riding her for this year, and she’s very smooth to work with. She’s nice and slow, so you don’t have to worry about her getting too fast or too slow. She’s the perfect speed.” 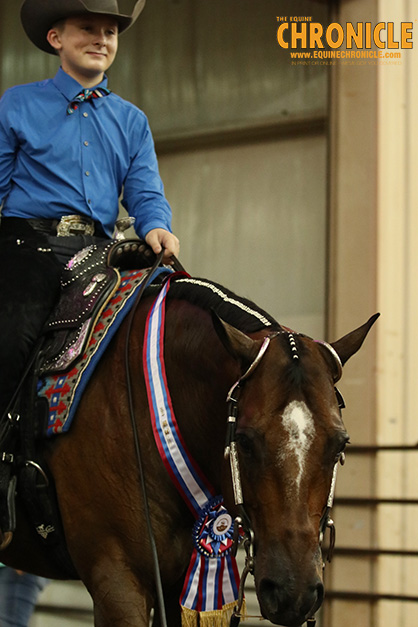 In the past, Lane has competed in Trail and Horsemanship, but Western Pleasure is his favorite event so far. “It was hard to remember the patterns. I like this much better.”

“My trainer, Dave Archer, and my parents told me to use my feet in the finals, because that’s all you really have to do with Goody. You also don’t have to use your hand much with her. They also told me to ride smart and pay attention to where my position was in the ring. They also said to have fun because this is my first Youth World!”

Now that Goody has helped Lane win two titles here at the Youth World, she’s headed to the NSBA World and Congress. We’re sure she will have a supply of black licorice on hand at both shows.

“I think it’s funny, because I’ve never met a horse like this, but she loves black licorice!” 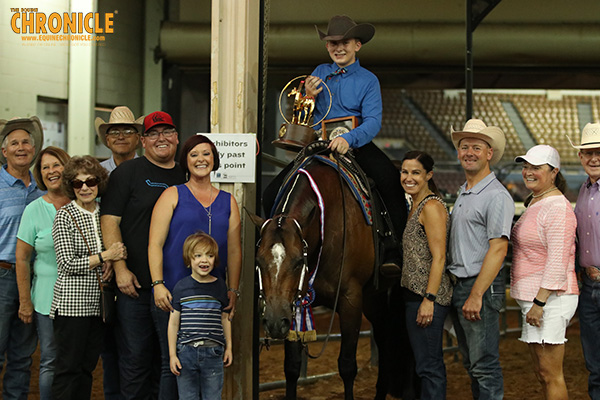 The Reserve Champion was Avery Mortman with Just A Touch More. Third was Cheynne Augsburger with Unanimously Too Cool. Fourth was Emma Gore with Only When I’m Invited. Fifth was Brooke Inchiostro with He’s Absolutely Sure.

Sydnie Ochs rode her 4-year-old gelding, No Doubting Me, to win her first World title in 14-18 Western Pleasure in unanimous fashion. The Ochs’ family purchased “No No” as a yearling in the NSBA World Show Sale. Since that’s time, he’s been in training with Dawn and Brian Baker.

“I had never done Western Pleasure before I came to Brian and Dawn. They’ve taught me everything. They’ve taught me that if I’m having a good ride, just to sit back and show. Brian is very calm. The mare that I showed before, I had to ride her every step. But, with No No, you just have to sit up, and he does his job. He has a very slow hock, and it looks very easy for him.” 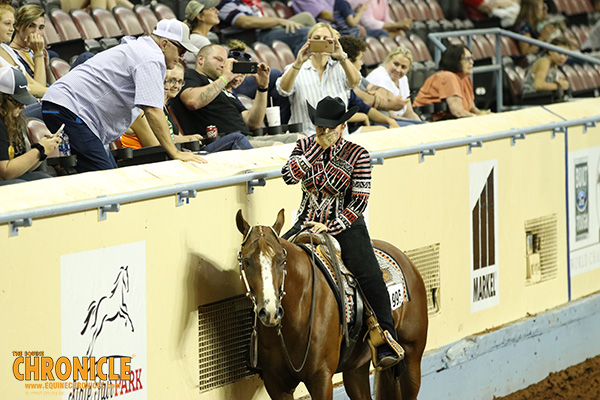 After a rocky warm up yesterday, Sydnie was a little nervous going into today’s finals. But No No proved his worth. “I was really nervous going into it, because he wasn’t very good yesterday. But, today, he showed up. I knew my left lead was going to be good, but I was worried about my right. He was very good today.” 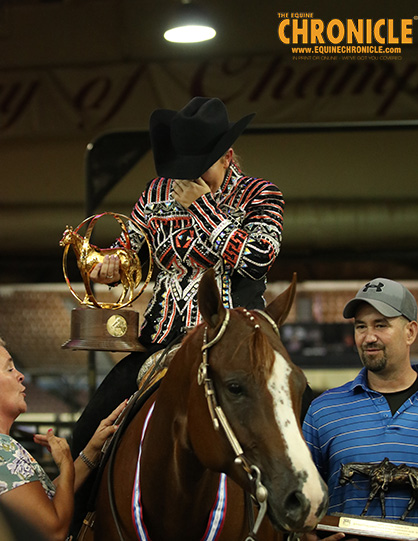 In the future, Sydnie hopes to try Western Riding and Horsemanship with No No.

The Reserve Champion was Brody Galyean with Cool Poco Dot. Third was Giorgia Medows with It’s A Pretty Thing. Fourth was Steve Wheat with Rain Makes Me Sleepy. Fifth was Taylor Leone with Sleepin In On Sunday. 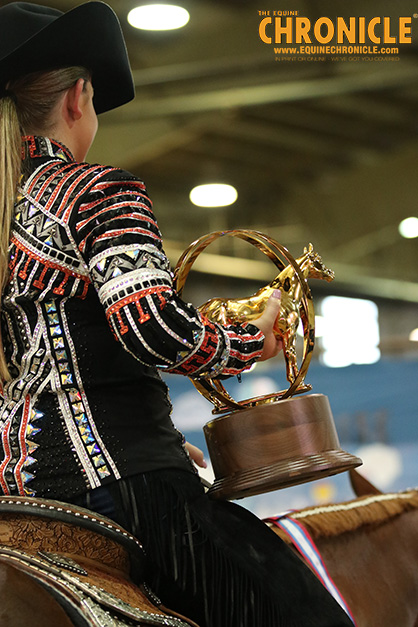 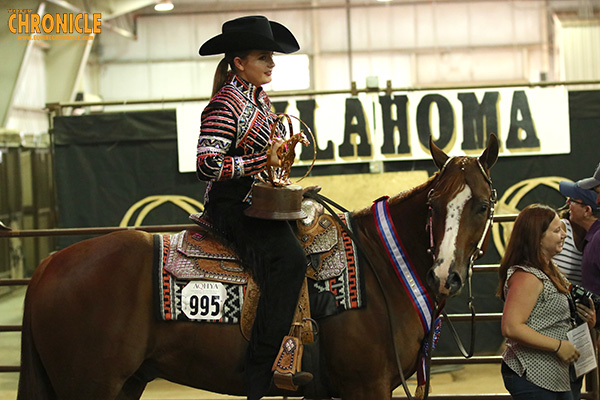 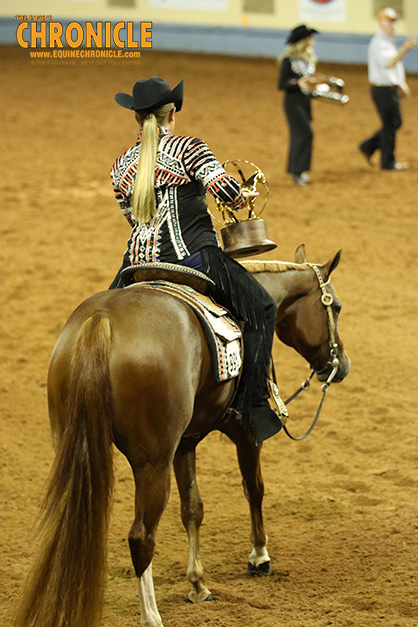 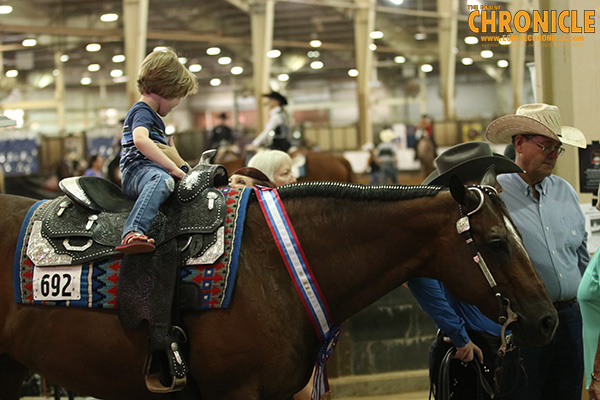 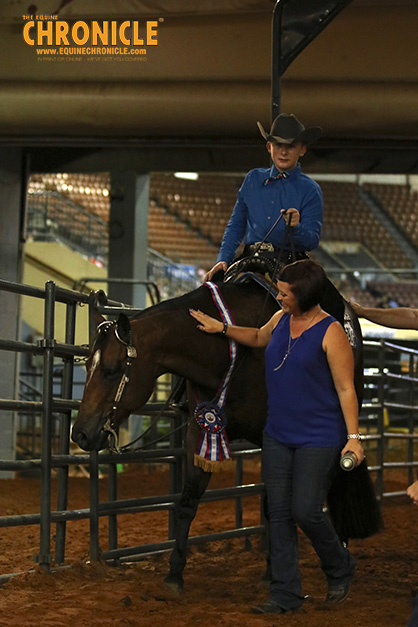