“Super Bowl of Show Jumping” Will Take Place in April in FL. Bringing Riders From All Over the World 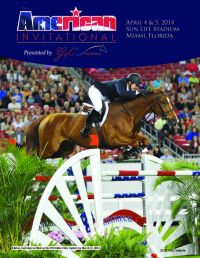 The prize list for the 2014 Tampa Equestrian Series is now available online by visiting www.stadiumjumping.com. Stadium Jumping, Inc., one of the nation’s leading horse show production companies, will be hosting the two week equestrian event at the Bob Thomas Equestrian Center at the Florida State Fairgrounds in Tampa, FL. New for 2014, the 42nd Annual $200,000 American Invitational presented by G & C Farm, will be held under the lights at Sun Life Stadium on April 5, 2014. The world’s top equestrians will come together for Tampa Equestrian Series’ two weeks of competition, held from March 26 – April 5, 2015, to vie for the winning titles at this prestigious event.

The Tampa Equestrian Series will kick-off its two weeks of competition with the Tampa Bay Classic, which is scheduled for March 26-30, 2014. It will include the $25,000 Tampa Bay Welcome Stake on Friday, March 28, the $35,000 Grand Prix of Tampa on Sunday, March 30, and the $3,500 USHJA National Hunter Derby. Premier hunters will also be featured with divisions for professionals, juniors, and amateur-owners.

The Tournament of Champions is next, and will be held April 1-5, 2014, featuring a full array of hunter, jumper and equitation events. The 42nd $200,000 American Invitational, presented by G&C Farm, which will take place on Saturday, April 5, 2014 at Miami’s Sun Life Stadium. America’s “Super Bowl of Show Jumping,” is a historic event, which brings together the top horse and rider combinations in the world. Invitations for the event are extended to the top thirty equestrians on the USEF National Computer Ranking List, plus past and present Olympians and other top invitees.

Annually, this event showcases exhilarating equine power, amazing speed and agility, and equestrian excellence at the home of the NFL’s Miami Dolphins. The day is filled with extraordinary entertainment and activities for the entire family to enjoy.

Tickets for the Saturday night spectacular are on sale Tuesday, online at: TicketMaster.com Ticket prices are $29 for Children and Adults and $24 for Seniors 55 & Older. Group Tickets are $24 each for 10 or more persons.