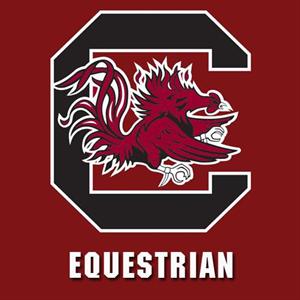 Both the hunt seat and western teams won, 6-4, respectively.

“This was a tough win for us today, so I was really proud to see that we kept fighting, especially late in the meet,” South Carolina head coach Boo Major said. “New Mexico State proved today that they deserve their No. 4 ranking, so we certainly tip our hats to their riders because they showed up today and I thought they rode well. But the meet came down to the reining, and that’s a group that has shined for us all season, and I was proud of them for coming through for us today.”

The Gamecocks jumped out to an early lead on Saturday, winning four of five points in equitation over fences. Sophomore Samantha Kraus won the first of four straight points for Carolina when she knocked off New Mexico State’s Emily McConnell, 86-75. Junior Amber Henter won the first of her two points when she cruised past Julie Frey, 82-71, giving the hunt seat captain her seventh jumping point of the season. A late addition to the Carolina lineup on Saturday, junior Alexa Anthony shined, posting an event-high score 87 to beat the Aggies’ Shannon Dooley, 87-83. Anthony was named MVP of the event, her first career jumping MVP and third of the season. Junior Samantha Smith gave the Gamecocks a 4-0 lead when she edged NMSU’s Amber Tassel, 85-84. The Aggies avoided the sweep when New Mexico State’s Elizabeth Solomon won her point, 79-75.

In the western arena, New Mexico State put a slight dent in the Gamecocks’ lead, winning three of five horsemanship points to give South Carolina a 6-4 lead at the halfway point.

Trailing 6-4 at the halfway point of Saturday’s meet, New Mexico State again closed the gap on South Carolina, winning three of five points in equitation on the flat.

The Aggies won the first flat point to cut the Gamecocks’ lead to 6-5, but Henter and Adele Norton posted back-to-wins to make the score 8-5. Henter, making her flat debut for the season after being added to the lineup on Saturday morning, defeated New Mexico State’s Dooley, 79-71. Norton followed with the second-highest score of the event, knocking off the Aggies’ McConnell, 81-69. Norton, a Virginia native, is 4-0 this season in equitation on the flat. All four of her wins have come on the road.

Holding an 8-7 lead heading into reining, Saturday’s meet looked as if it might be headed for the 10-10 tie that happened Oct. 29, 2011, when the Gamecocks and Aggies last faced off in a dual meet.

New Mexico State won the first reining point to tie the score at 8-8. But a pair of back-to-back zeroes by the Aggies proved costly, as Carolina won the final four points of the meet.

Sophomore Sarah Bouchard picked up her fourth point of the season when she defeated the Aggies’ Marissa Bartman, who scored a zero for her ride. Needing to beat the 64 that Gamecock junior Cody McMillion posted, New Mexico State’s Stefanie Story also zeroed, giving South Carolina a 10-8 lead and clinching the win if the meet had gone to a tiebreaker. Junior Layla Choate followed by winning her team-leading eighth reining point of the season, as she edged the Aggies’ Haley Newkirk, 68-66.5. Senior Jordan Brown closed out the meet by defeating Brynn Larson in a re-ride, 68-66.

South Carolina (1-2 SEC) will look to get its SEC record back to the .500 mark next Saturday, when the Gamecocks travel to face Georgia at the UGA Equestrian Complex. In the fall meeting between the Gamecocks and Bulldogs, Georgia won, 10-9, in Blythewood.