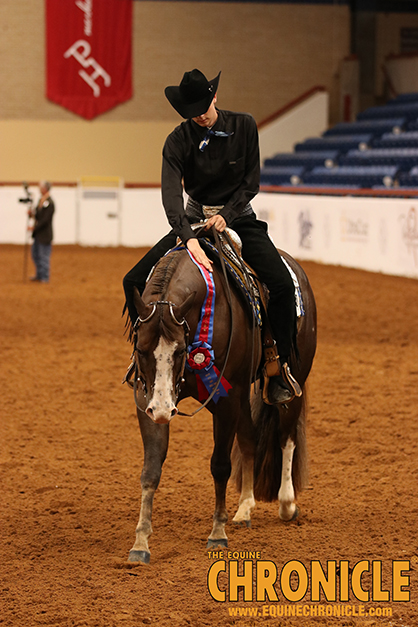 The Reserve Champion was Taylor Daniel with Who Sez. Third was Natalie Sekulow with Miso Lazy. Fourth was Renee McCray with Special Appearance. Fifth was Mikayla Hatcher with Livin Big.

Peyton Staat rode Sensational Satinrose to win Novice Youth 13 and Under Western Pleasure. The Reserve Champion was Cara Christensen with Optimized. Third was Kaylynn Heitman with Hunting Blue Skies. Fourth was Saren Holyoak with Ill Be At The Bar. Fifth was Emily Miller with Ima Hugable Impulse.

14-year-old Peyton’s partner for today’s class was her 11-year-old mare she calls “Rose.” Peyton does have other World Championship titles she has earned in the walk-trot division, but this is her first time winning in the youth division. This team competes under the guidance of Bobbie Emmons. “She told me to remember to sit back and use the buttons I know how to use. I was just supposed to ride her, because she’s done this before.” 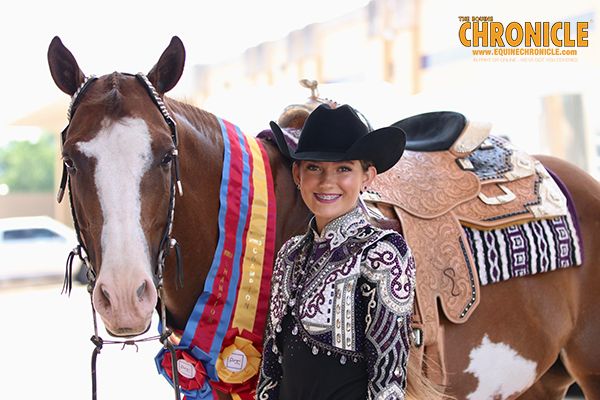 Peyton thinks the judges enjoy watching Rose in Western Pleasure because of her balanced lope cadence. “She has a really good hock, and she swings her front leg really good. Western Pleasure is my favorite class, because Rose is just so good at it.” 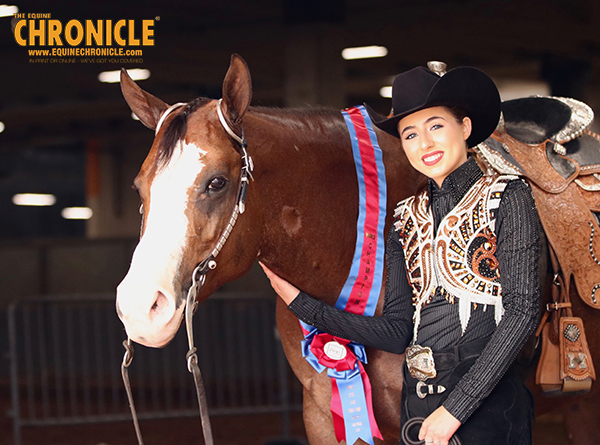 Kaitlyn Smith rode Southerncomfortzone to win 18 and Under Western Pleasure. The Reserve title went to Isabella Applegarth with Get The Sensation. Third was Samantha Stubblefield with Even More Sensational. Fourth was Erin Griffin with Gotta Glo Slo. Fifth was Rebecca Figueroa with Check Required.

“Georgie” is a seven-year-old double registered gelding that the Smith family has had in the barn since he was two years old. While Georgie is a regular on the AQHA show scene, having won titles like Green Western Pleasure and 3-Year-Old Open Limited Western Pleasure at the Quarter Horse Congress, this is only his second APHA show. After his stint here in Fort Worth, he will be headed to the AQHA Youth World, NSBA World, and Quarter Horse Congress.

Kaitlyn describes Georgie is an easygoing guy, who throughly enjoys his job. “We’ve tried to teach him lead changes in the off season. He can do them, but he’s not very good at going fast, as you can tell in our little victory lap! That’s his happy speed, and he would like to stay there the whole time.” 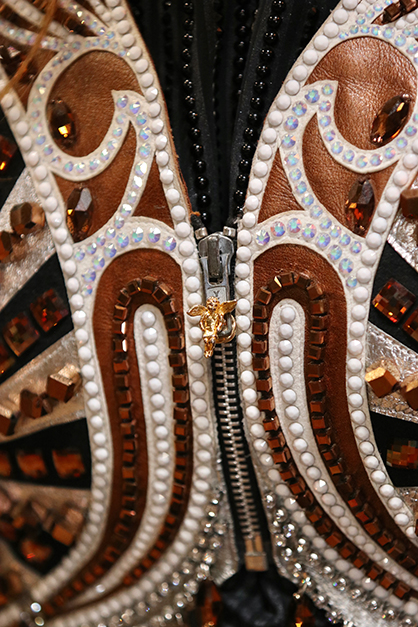 Kaitlyn keeps this tiny angel charm on her vest as a way to honor her grandmother, who passed away from cancer.

“He’s very easygoing and loves to show. He’s me, in a horse, if that makes sense, but he has a little sass to him. He never means it in an ill way though. He’s very funny. He’s my heart horse, so he always has a ‘Get Out of Jail Free’ card.”

The 13 and Under World Champion was Avery Mortman with Hes Just A Touch More. Reserve was Peyton Staat with Sensational Satinrose. Third was Cara Christensen with Optimized. Fourth was Kaylynn Heitman with Hunting Blue Skies. Fifth was Kimber Cobbs with Simon Always Says. 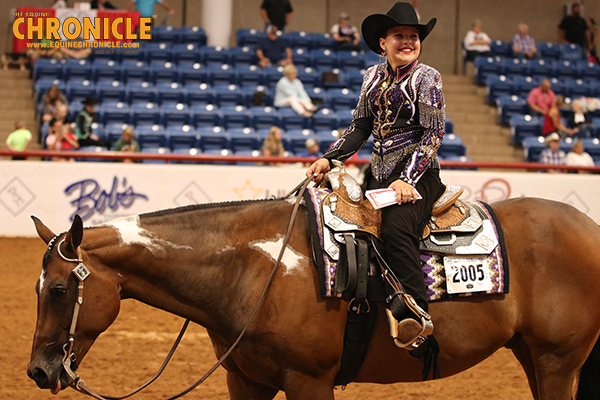 The Youth Walk Trot Western Pleasure Champion was Anna Overway with Eazy On My Assets. Reserve was Celia Heinbuch with Stately Sensation. Third was Delaney Good with Kewl Zippin Strider. Fourth was Ashlyn Landy with Hide Your Crazy. Fifth was Alexandra Rippeon with Famous N Foolish. 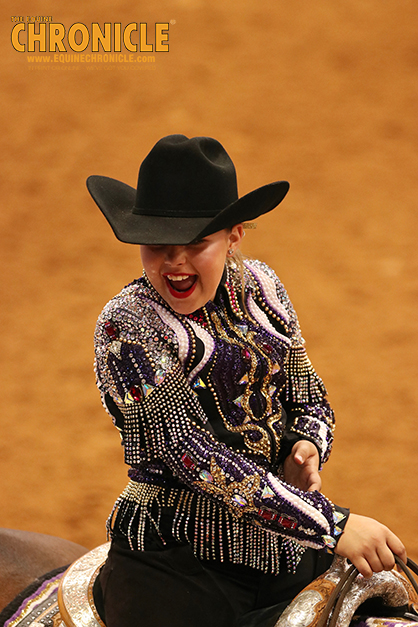 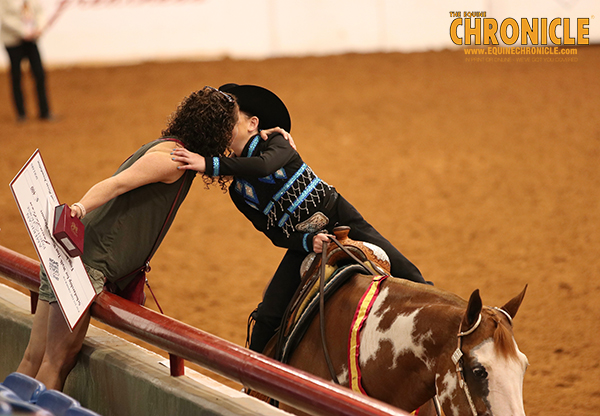 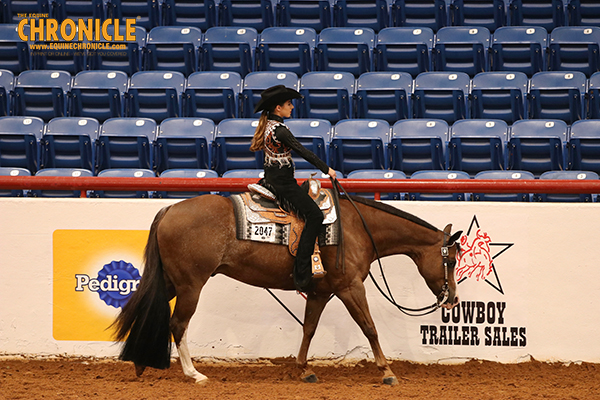 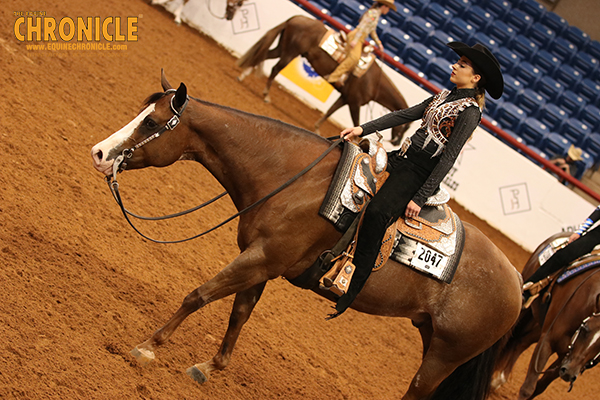 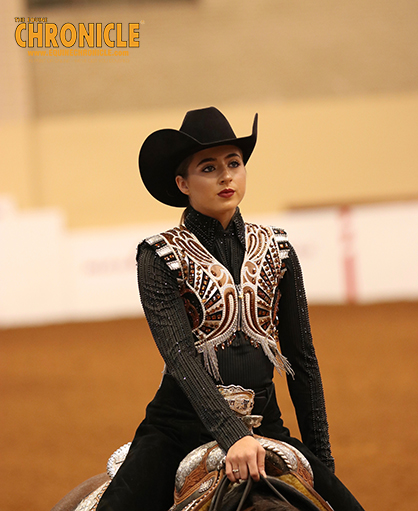 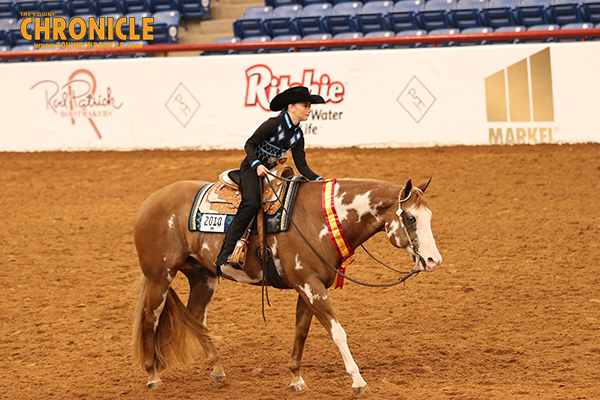 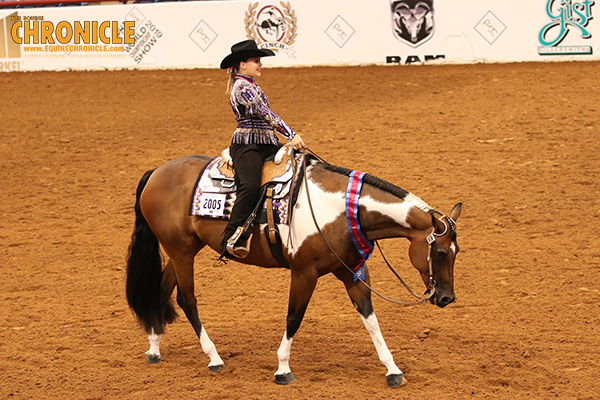