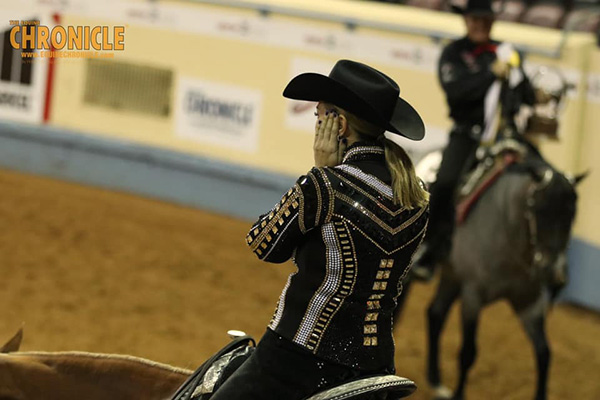 Sara Simons is putting the cap on a tremendous year with the double registered, 4-year-old gelding named Hez Blazin Trouble, after winning numerous World Championship titles at the APHA World Show, Quarter Horse Congress, and now Junior Western Riding this evening at the AQHA World Show. We know from talking with Sara in the past that Western Riding is her favorite class, so being able to win at only her second AQHA World is a dream come true.

“I put so much pressure on myself with that horse!” Sara says. “Also, I really haven’t done that pattern much, and he’s still very green. That gave me a little bit of concern, because he’s not as familiar with that pattern as he is with patterns 1, 2, and 4. But, he did very well with it.”

Already here at the show, “Parker” has won the Level 1 Trail, Level 2 Trail, Level 2 Western Riding, and still has Level 1 Western Riding left to go. As Sara enters the pen to compete in her final class with Parker it will be bittersweet, as he will now head to Highpoint Performance Horses with new owner, Bonnie Sheren. But, Sara is grateful for the time she’s been able to spend shaping Parker’s early years.

“He’s kind of brought me into the Quarter Horse world slowly, and he’s so amazing. He has helped my career tremendously and really jump-started it within AQHA. Horses like him don’t come along very often, and I’m so excited for what the future will bring. 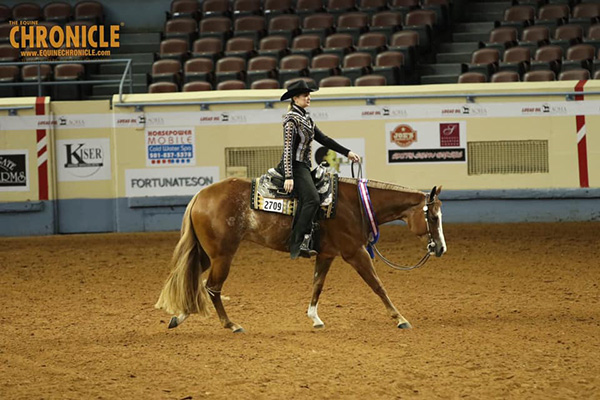 Today was a rough schedule for the junior horses, to say the least. For some reason, the Junior Trail was the first class of the day, at 8 am, and the Junior Western Riding was the last class of the day, at 10:00 pm, so these young horses had a very full day of preparation and competition. In addition, a judges’ scheduling conflict left the Norick arena empty for two and a half hours while they waited for judges to come over from the Performance pen, making the start time for the finals go four hours later than anticipated. Parker has been taking it all in stride by napping.

“He’s been sleeping all day,” Sara confirms. “He sleeps all the time. He’s very low energy and needs his rest. He’s going to have the day off tomorrow and then we will show again on Friday.”

Parker’s owner, Bonnie is excited about the opportunity she will now have to bond with her new horse. “He came in here with a lot momentum, for sure. I thought he was capable of doing this, but there are so many nice horses in this class. I could barely even watch; but, from the glimpses that I saw, it was really good. He’s kind of special, that one.”

“Jason [Martin] is chomping at the bit to ride him. I won’t show him for a while, but I’m excited to bond with him, like I have with my other horses.” 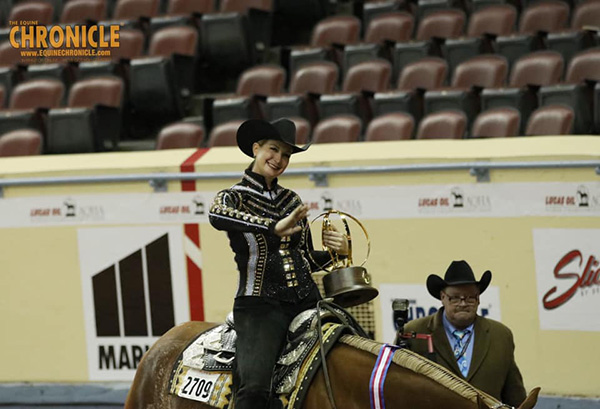