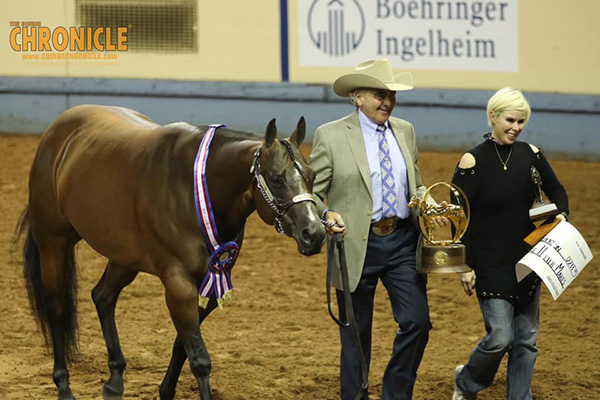 It was a late evening for the Performance Halter horses at the 2019 AQHA World Show, but we have three new World Champions to congratulate.

First, Tom Robertson led Most Appealing Dream to win her 12th World Championship title in Open Performance Halter Mares. Tom was at the lead of the 9-year-old homebred “Roxy Jane” for Andrea Alderson. The Alderson family raised Roxy and still has her mother, Little Bit Impulsive, aka “Sally Sue.”

In order to compete in Performance Halter at the World Show, Roxy must be shown in the class in which she received her performance points. That means Andrea will be showing Roxy here in Oklahoma City in Senior Western Pleasure and Amateur Western Pleasure

“She’s very deep hocked and flat with her front leg,” Andrea says. “She’s actually pretty fluid. She was Casey Willis’ first Coughlin horse at the Congress. He showed her that first year that he went out as a limited rider with Jon Barry.”

Over the years, several top trainers and handlers have helped Roxy to achieve her twelve World Champion titles, including Andrea, Tom Robertson, Gene Parker, Ross Roark, and Luke Castle. This year, Roxy won both Open and Amateur Performance Halter at the Congress. The last two times Tom has shown Roxy at the World Show, they were the unanimous champions.

“The two times Tom has shown her here, she has won straight across, and that’s exciting. Sometimes you don’t see that here.”

Andrea is excited for next year, because Roxy has an up and coming weanling by No Doubt Im Lazy. 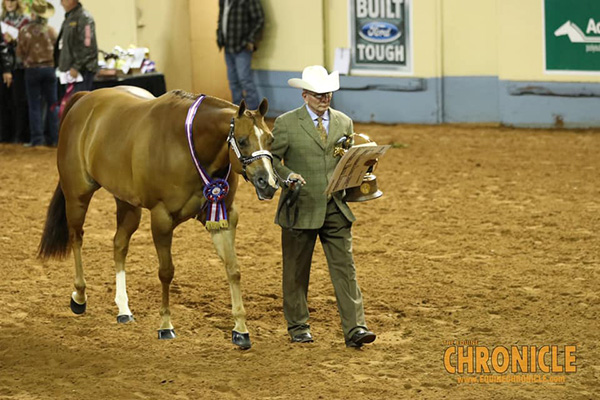 Next, in Open Performance Halter Geldings, Ted Turner led Mytesly to win his 17th World Champion titles. 9-year-old “Sly” has been led by handlers such as Ted Turner, Vickie Strickland, Johnna Dobbs, and Cooper Dobbs throughout his career. The Strickland family is of the opinion that Sly just keeps getting better with age.

“I actually rode him in the Stake Race and placed 14th at Select World!” Vickie says. “He likes to buck. You have to keep his head up; because if he gets his head in between his knees, it’s all over!”

All of the members of the family have competed in Speed events in the past. “We all started with Speed and did the flag races when we were younger,” Jerry says. “So, when they changed the rule [requiring Performance Halter horses to compete in their performance event at the World Show] it wasn’t that big of a deal.”

In addition to being ridden regularly, both Jerry and Vickie attribute Sly’s long term success and consistency to his breeding and training program.

“He has Mr Conclusion on both sides, so he’s both Halter and performance bred,” Jerry says.

“Also, he’s with Ted Turner… and you know that he does everything with military precision,” Vickie adds. 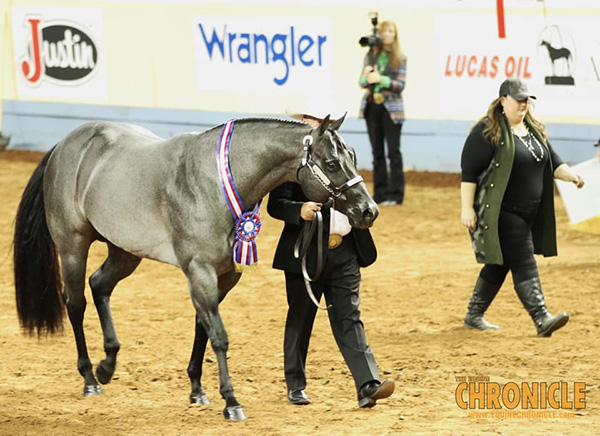 Finally, in Open Performance Halter Stallions, Ross Roark was at the lead of Incognito Sirprize for Billy and Suzonne Franks. Trainer, Kelley Stone, had this to say about the beautiful, blue roan stallion.

“The thing that I love about this horse, more than anything else, is his great mind,” Stone says. “His versatility is excellent, and this horse wants to compete in events other than just Halter, because he’s a conformationally correct horse.”

“He loves to be ridden, and he loves to be shown in Halter. He’s a truly versatile horse, structurally correct, and has a great mind to go with his great body.”