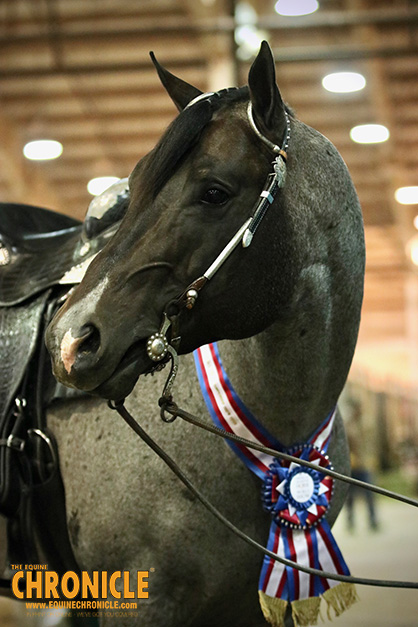 RJ King loped the beautiful, bay stallion, VS Goodride, to win Junior Level 2 Western Pleasure this morning at the 2019 AQHA World Show. RJ is one part of a multi-pronged team that trains and manages the four-year-old stallion they call “Boss,” for owner, Brenda Gower.

“It’s definitely a team effort,” RJ says. “He lives at Simons Show Horses, but Charlie and Jason stand him at HighPoint, so they get him three or four times a week and take him over to the farm to collect him. Everybody has their hands on him, and it shows a lot for a stud to be able to deal with three or four different people riding him a lot.”

“For a stud, it says a lot about him. I’ve been around a lot of studs and trained a lot of studs, and I would’ve never thought that a stud would’ve gone around for several different riders. There have been a few of us show him here, and we all won trophies with him.”

Part of the reason why Boss is so easy to prepare goes back to his easygoing demeanor. “He’s super chill and really easy to prepare. He’s not a high energy horse. He’s a great minded stud. He is by VS Flatline and out of Goody Goody Gumdrops, a horse that Sharnai Thompson used to show, so he has Western Pleasure in his blood.” 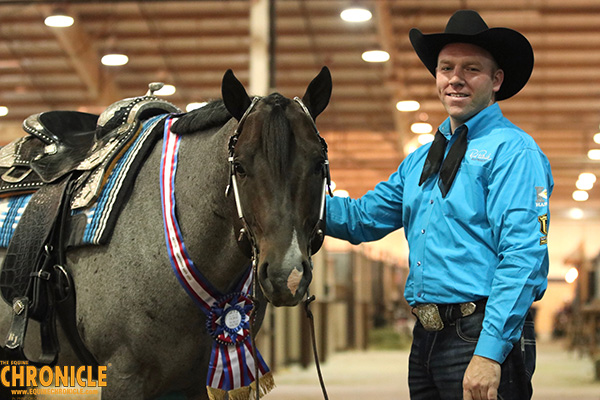 Everyone associated with Boss is excited to see what happens when his first foal crop grows older in 2020. “Last year, I think they bred 105 mares, so he has weanlings on the ground. This year, he bred about the same. If they turn out like him, they will be very trainable, obviously very versatile, and able to do a lot of different classes and do them well. Also, his conformation, looks, and disposition will go along ways.”

Looking forward to the future of this young horse’s career, RJ is hopeful he will continue to be shown as much as possible. “I would hope that next year we continue to show him more, especially in Trail and Western Riding, because I think he’s still young and has a lot to show people. I think everybody enjoys being able to see a stud that they’ve bred to, at the show, and they can come take picture with him, and see him the flesh. I think people get excited about that.”

The second place horse and rider team was Stephanie Armellini with Shootin The Breeze. Third was Terry Cross with She Isa Crowdpleaser. Fourth was Shannon Vroegh with I’ll B Batting Ona RV. Fifth was Houston Huff with Km Nothin Better.