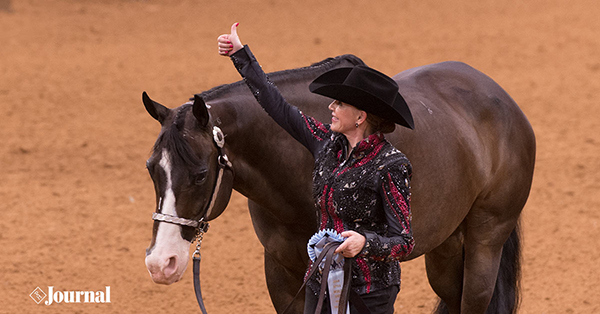 The American Paint Horse Foundation recently announced the addition Meredith Landy of Temecula, California, to the organization’s Board of Directors. Meredith’s initial three-year term will expire in 2021, with the option to serve for another three years. The APHF is the non-profit arm of the American Paint Horse Association that focuses on the higher education of Youth members and the preservation of APHA’s heritage.

Meredith, an APHA member since the 1970s, is enthusiastic about the APHF’s work and ready to contribute. She began showing with APHA at age 11 and has shown Paint Horses off and on throughout her life. From 1976–77, she served as AjPHA treasurer and was elected as AjPHA president in 1977. Meredith has shown many horses to world and reserve world championships in a wide variety of events, including Western pleasure, hunter under saddle, pleasure driving, Western riding and trail. She’s routinely earned spots on the annual Masters Amateur Top 20 and has won several Honor Roll championships.

The horsewoman also established a fund through APHF in honor of her niece, Suzanna Nelson; Meredith is in the process of funding this scholarship, “Suzanna Smiles,” in so it can award perennial scholarships. Her daughter Ashlyn, who is now 9 years old, showed at her first APHA Youth World Show in 2018 and won several scholarships, much to her delight.

“We are fortunate as a foundation to have someone with Meredith’s compassion and knowledge of the Paint Horse community,” APHA Executive Director Billy Smith said.

For more information about the foundation or to give a gift, visit apha.com/foundation or contact the APHF  at (817) 222-6412 or foundation@apha.com.