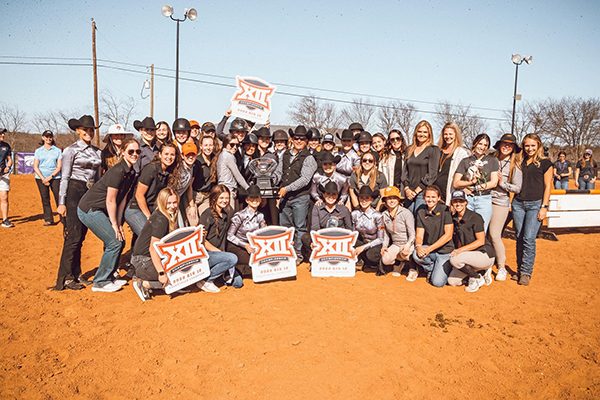 For the eighth time in program history, Oklahoma State Equestrian won the Big 12 Championship as the top-seeded Cowgirls defeated fourth-seeded TCU, 11-9, for the title Saturday at Diamond Creek Ranch.

“I am so proud of our girls,” head coach Larry Sanchez said. “They rode extremely well the entire weekend and really showed a lot of heart. TCU rode very well today; it was a close meet from the start.”

The meet started with Fences, where the Cowgirls took an early 3-2 lead. The only two Horned Frog points came from Sydney Berube and Raegan Rast when they beat their opponents, 164-163 and 166-159, respectively.

Coinciding with Fences was Reining. JoJo Roberson dropped her point to Shea Graham, 142.5-140. Hannah Lovrien countered with a score of 144.5 to beat Bella Andrews.  Molly Mitchell secured a victory, 146.5-144, a spot on the All-Big 12 Reining Team, and the Reining tournament MOP.

The meet came down to Horsemanship, where the Cowgirls took the contest, 3-2, and secured the win.

The lone TCU points came from Girogia Medows and Payton Boutelle after besting their opponents, 153.5-148 and 152-145, respectively.

OSU will be back in action at Nationals, April 14-16, in Ocala, Fla., to compete for the national title.

“We have some more work to do before Nationals in a few weeks, but we’re excited to get to Ocala,” Sanchez added.